The year was 1968 and I was a mere child when there was a riot at the Democratic National Convention in protest of the Vietnam war.

Ok…ok…I wasn’t a mere child……I was 26, BUT…..had no interest in protesting because I really 1. hate crowds, 2. I really wasn’t into rioting…….(being a short person and figuring I’d get stomped on by some anti-war protester) and 3. I figured playing anti-war records on the radio as a disc jockey, I was doing my part. Besides, no chance of getting stomped on in a radio station studio.

(sniff) Miss the tar and feathers

And there were a lot of great anti-war songs around back then. Many of them recorded before the 68 convention and still quite relevant by the time the convention was held.

Songs like, “Feel like I’m Going To Die Rag” by Country Joe and the Fish, “Eve of Destruction” By Barry McGuire, and “Give Peace A Chance” by The Plastic Ono Band. (John Lennon and Yoko Ono)

So, all that said, which I just did, here we are on the verge of possibly having a really great riot at the Republican National Convention in Cleveland this coming Summer. IF…..IF……the Republicans try to, ahem, “screw” Donald Trump out of the nomination by, as they like to call it, “have an open convention.”

But, as we with certified brains know it’s really called, “a brokered convention.”

Which is basically screwing someone who may or may not have enough electoral votes to be the nominee out of being the nominee because they don’t like that choice, that, yes, that the people made when they went to vote in all those primaries. Because, they, the Republicans know better than those idiots who actually go out and waste their time voting in primaries.

Like waking up with an elephant head in yer bed pal

Ok, it goes something like this. If a Republican candidate running for President does not have enough of those pesky electoral delegates, which is 1,237, by the time they get to the convention, THEN all chaos breaks out.

Meaning, delegates can opt to vote for whoever they want to. Now the tricky part is that GOP big wigs have to scurry around the floor and in back rooms trying to convince those delegates to vote for who the party wants instead of  The Donald.

Without starting a riot and ending up like this:

“”Hey pal, I see you’re from (insert state here) and Donald Trump won all of your delegates, but, he doesn’t have enough to get the nomination, soooooo, because we don’t like him, we want you to pledge your delegate to Ted Cruz.”

“Um, you want us to Pledge Ted Cruz. He’s not polished up enough?”

“No you damn idiot, we want ya to vote for Cruz instead of Trump.”

“Um, but we don’t wanna vote for Cruz. He looks evil, his eyes are too narrow, he has a funny shaped mouth, a pointed nose, and his voice is like runnin’ yer fingers down a blackboard. Nope, we’re stickin’ with Trump.”

“Hmmmm. Saaaaay, doesn’t your state want a new Interstate highway and some sort of new bridge that’s gonna replace that one that’s falling down.”

“Well look pal, and I’m not EVEN gonna mention that I have some really great photos of you and some hooker in a hotel room,  so either you vote for Cruz or when it comes time for funds to be appropriated for those projects, and any hope those compromising photos don’t wind up on the Internet, you can suck ass.”

Now, the problem here, as I see it, is that allllllllllllll those people who voted in the primaries for Trump are gonna be, as I subtly like to put it, pissed off. Even worse, f**king pissed off. Which is worse than just being regularly pissed off.

Now, that said, which I just did once again, I personally would really like to get in on a good riot, but, for the reasons I mentioned earlier, and because I absolutely hate getting blood all over my new J.C. Penny shirts that I just bought, will opt to just get some really good snacks and watch it all happen on TV. 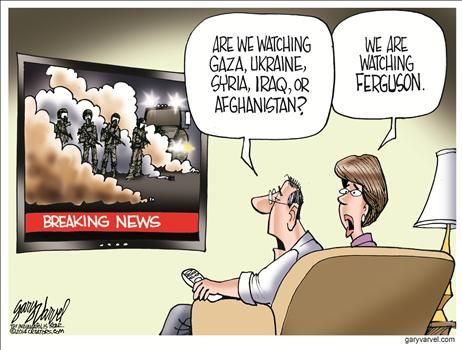 But, if YOU missed out on the 68 riots, here’s your chance to be a part of history. Maybe even get yourself on national TV grabbing some delegate by the balls, or storming the podium and telling Mitch McConnell he resembles a turtle, or, holding up a photo of Al Lewis from the “Munsters,” who resembles Ted Cruz, and saying you’d vote for HIM rather than Cruz. Even though Al Lewis has since passed on.

Close, but no cigar pal

Or just cause a giant ruckus like yelling out a bunch of obscene words or, as in the case of reporter Dan Rather in 1968 at the Democratic Convention, do something really stupid like, ask a question.

Which Rather did, and which caused security guards to attempt to remove Dan from the convention floor, to which Rather said, “”Hey you freakin’ motherf**kers, don’t f**king push me you damn asswipes!”

Um, no, what he actually said was, “Don’t push me.” And, Take you’re hands off of me unless you plan to arrest me.”

Personally it would have been much more entertaining if he actually said what I would have liked him to say…..which was my first quote. Reality TV at its best.

So, in  conclusion, expect there to be a really good riot if they screw Trump at the convention.

If you’ve longed for your own 15 minutes of fame, followed by your 3 days in the slammer, and lawyers fees, go for it. You could be an Internet sensation…….for at least 15 minutes.

Oh, I’ll be rooting for ya from my cozy living room as they haul your butt off.
Now THAT’S a reality show I WILL be watchin.’

Former disc jockey, (Dick Jones) 30 years, and author of, "I Could Have Been Famous But Sex, Love & Life Got In The Way" available at Amazon.com books, & Kindle, "The Covert Chamber" a mystery novel available at Amazon.com and Barnes & Noble, and "Forgotten" the story of two WWI pilots who were forgotten for over 70 years available on Amazon.com and Kindle
View all posts by misfit120 →
This entry was posted in current events humor and tagged 1968 Democratic Convention, Barry McGuire, Country Joe and the Fish, Dan Rather, John Lenon, Vietnam, Yoko Ono. Bookmark the permalink.