I don’t know about any of you, but when it comes to being in a state of panic due to the recent acts of terrorism across the world, and most recently in California, I personally refuse to panic.

It’s just my nature. I NEVER panic about anything…um……well, maybe if I get a letter from the IRS or one of my ex wives. But that’s it!

The reason I do not panic with regard to some nut who decides to go on a shooting rampage is because I have a plan. As should you.

My plan is very simple. RUN! 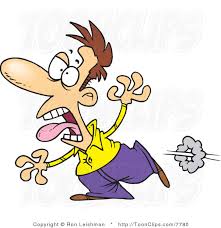 Yep, run like hell to the nearest exit, open door, or hide behind some fat guy. That’s my plan. Because I can run like a motherf**ker when I have to. I know this from years of experience running to the bathroom at various places after scarfing down jalapeno peppers or something else spicy.

COME BACK HERE YOU LITTLE BASTARD!!!!

BUT…….I’ve been trying to instill this strategy to my other half.

I say to her, “Leilani, if you so much as hear anything that sounds like gunfire, run like hell.”

And she agreed to do so.

The one problem there however, is the fart factor, which, can at time resemble a gun going off. I base this on the one time I went to pick her up at the gym and observed this……. 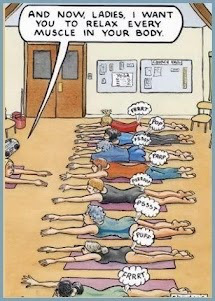 Now the other problem here, as I see it, is that whenever I say anything to her, wherever we are, she always sez, “What?”

To which she replies, “You mumble when you talk so I can’t hear you.”

“Which is not true folks considering I have a very deep voice and if I can hear me why in the hell can’t she hear me. But, that’s her defense when it comes to saying “what?” 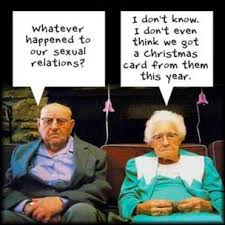 A normal conversation at our house. And ya wonder why I’m worried.

So I’m thinking to myself, “Oh sure, if an event happens where I have to yell “RUN!” and she sez “WHAT!” guess who the hell is gonna make it to the nearest exit first. Cause I’m NOT gonna stick around and say RUN a second time….cause I’m gonna be running.

So, what’s the solution to this dilemma?

I either yell RUN! a second time and both of us become a statistic, OR, I run like hell and hope she had enough sense to figure out that if I was running something must be afoot……then run like hell. Unless she thinks I was off to the bathroom.

But, that’s just a guess.

However, there is one place we frequent where there are a lot of people, (casinos) because they give old geezers like us free slot play once a week and throw in a free coffee and dessert.

So, with that in mind, and the fact that hundreds of people, (including freeloading seniors) go to casinos and it could be a prime target for an idiot, and throwing the WHAT? factor in, I have devised an ingenious plan to solve the WHAT? response should I have to yell out RUN!

You know those plastic rubber thingys that you get at a casino that you can attach your players club card to so that you don’t lose it when you go from slot machine to slot machine. Yep, I’m attaching one of those to her so that I can yank her out of danger at any given moment.

Now the only problem here is that those thingys really stretch quite a distance before they become taut so I actually could be 50 feet away from her before the “yank factor” takes effect. Which when ya think about it, falls into the same category as saying her saying “WHAT?”

OR……carrying two purses attached to your arm might also work. Um……maybeeeee not

Nah…..then if I yelled RUN! everybody in the damn casino would run too and we’d get trampled. Damn!

I got it. Yell the word “FREE” at any woman in a casino and they’d run like hell.

AND, considering MY other half is a senior as well, and a woman, that word “FREE” would never get a response of WHAT?

Trust me on that one.

Then again…….thinking about the dangers we face in today’s society, I’m not quite sure which is worse……………… facing a terrorist or a woman at a sale.

DONATE & SUPPORT: The MisfitWisdom (free) PayPal donate link should you care to make a donation in the spirit of holiday giving for creative effort. Or not.

Former disc jockey, (Dick Jones) 30 years, and author of, "I Could Have Been Famous But Sex, Love & Life Got In The Way" available at Amazon.com books, & Kindle, "The Covert Chamber" a mystery novel available at Amazon.com and Barnes & Noble, and "Forgotten" the story of two WWI pilots who were forgotten for over 70 years available on Amazon.com and Kindle
View all posts by misfit120 →
This entry was posted in current events humor and tagged casinos, panic, running, terrorism. Bookmark the permalink.