Today’s Burning Question: What Happens When You Get Your Period In Space?”*

* For the record, jussssst in case someone is actually keeping a record, “I” did NOT come up with the title to this blog.

Can’t pin this rap on me pal.

It was “NPR” (National Pubic, um….sorry, “National Public Radio”) that actually asked that question and wrote the article I’m about to dissect entitled, once again, “What Happens When You Get Your Period In Space.”

(This has nothing to do with using periods, semi colons, or quotation marks in space. Sometimes ya just have to make these things perfectly clear)

Men, not having that “period” problem, sometimes suffer as well on a full moon night

Now, of all the questions NASA gets regarding space travel the one that was asked the most, (by women I would assume) during a live conversation with NPR’s Adam Cole, where listeners posed questions to European Space Agency astronaut Samantha Cristoforetti, NASA astronaut Serena Auñón, NASA astronaut Cady Coleman and NASA Chief Scientist Ellen Stofan on Tuesday at NPR headquarters in Washington, D.C.

(NOTE TO SELF: Finding cartoons on tampons is NOT gonna be easy for this blog. BUT…….considering PMS……………… 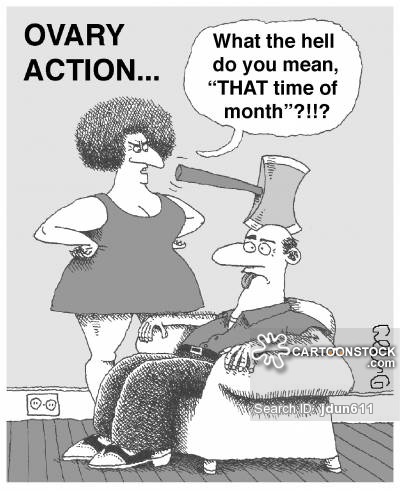 Note to astronauts in space with a woman: NEVER ask that question

Two quotes from this article:

“In the early days of space flight, menstruation was part of the argument for why women shouldn’t become astronauts.”

“Some claimed that menstruation would affect a woman’s ability and blamed several plane crashes on menstruating women. Studies in the 1940s showed this was not the case. Female pilots weren’t impaired by their periods. But the idea wouldn’t die.”

Now let me see if I understand this correctly. Some people actually believed several plane crashes were caused by women having their periods. WTF!

Now a woman having a headache I’d believe, based on the number of headaches women have when men get frisky at night, but having their periods!

I personally can vouch for that

Then again, maybe those studies were conducted by the same group who filmed Planned Parenthood purporting to sell fetuses.

HEY! If it’s on the Internet it’s gotta be true! Right!

Anyhow, I guess this was a legitimate question considering “microgravity might increase the incidence of “retrograde menstruation.” Blood might flow up the fallopian tubes into the abdomen, causing pain and other health problems. No one actually did any experiments to see if this really would be a problem, so there weren’t any data to support or refute these fears.”

Data?  Ya want data to support or refute these fears? WTF! Why cloud up the issue with solid facts. Just go with the flow, (not menstrual) and that way you could prevent women from going into space. Screw the facts.

I mean………besides getting their periods, what else could possibly go wrong with having a woman in space?

But…….women didn’t just take that claim and roll over. Nope.

“Advocates for women in space argued that there had been a lot of unknowns when humans first went to space, but they sent men up anyway said  Rhea Seddon, one of the first six female astronauts at NASA.”

I agree with Rhea. Based on my concern that a woman having her period in space seems trivial considering MY concern would be with pooping in space. What the hell do ya do with all that crap. (literally)

I’m thinking NASA astronaut Scott Kelly and Russian astronaut Michael Komienko who are currently on the International Space Station for one year. That’s a LOT of poop ya can’t just flush down a toilet ya know. Sooooo…..where does it go?

Aboard the Starship Enterprise:

“OMFG What is it Captain Kirk?”

“I think a huge Klingon missile is heading towards us!!!!!”

“Um I just came from the ship’s head after that hot chili you made for dinner and pooped my brains out and then  jettisoned it.”

NASA’s answer: “The feces produced by them will burn up in space and look like shooting stars to anybody watching ISS through telescope during the year.”

OK….that explains it. But….um……what about tampons then?

Um….forget it, I don’t EVEN wanna know.

BUT…it DOES explain the high number of shooting stars I’ve seen this Summer.

And a tip for you amateur astronomers with powerful telescopes who think you may have seen a shooting star………might just be poop and tampons. Just sayin’.

THEN,  poop, periods and tampons aside, there’s the question of “sexual desire” in space.

Here’s part of a quote from a 1971 NASA report where researchers Nick Kanas and William Fedderson suggest there might be a place for women in space:

“It is possible that a woman, qualified from a scientific viewpoint, might be persuaded to donate her time and energies for the sake of improving crew morale; however, such a situation might create interpersonal tensions far more dynamic than the sexual tensions it would release.”

“Time and energies,” referring to sexual desire while in space.

Which, to me, would mean if there were two male astronauts and one female astronaut, there might be sexual tension. Which, obviously could be solved by simply hiring a hooker, training her to be an astronaut, whose sole duty would be to relieve sexual desires in space. 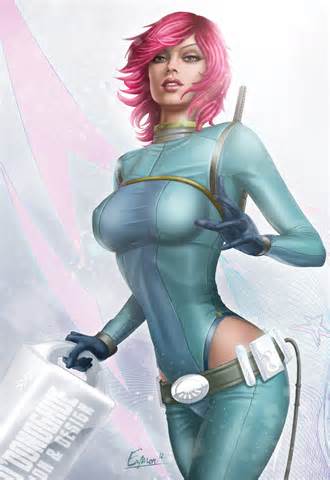 Dressed for the cause

Noooooo conflicts there. My thinking anyhow.

And, if you’re wondering why the push to include women in space. According to Glenda Callanen in a 1975 report for the Rand Corp., “It seems inevitable that women are to be essential participants in space flight. Even if they were only to take on the less scientific parts of the space mission, or if they wished to only help “colonize” distant planets, their basic skills must still prepare them to perform countless new tasks.”

Yep, just like here on Earth. The “less scientific parts of the space mission.” Like sex perhaps. HEY! How the hell do ya think we’re gonna colonize Mars for cripes sake!

And besides that, who’s gonna fold those fitted sheets that men astronauts can’t fold.

So, in conclusion, what DOES happen when a woman gets her period in space?

The answer” The same thing that happens here on Earth. DUH!

Bet you’re all relieved to hear that. Me too.

Cept for the part about poop and tampons floating around in outer space after it’s jettisoned from the space station.

I will NEVER visit a planetarium again, look through one of those giant telescopes, spot something unusual, and then claim EUREKA! I think I’ve spotted a new planet or I saw a shooting star.

Lest it be crap or a tampon.

DONATE & SUPPORT: You can donate to this inane blog for (cough) creative effort by clicking on the PayPal link below:

Former disc jockey, (Dick Jones) 30 years, and author of, "I Could Have Been Famous But Sex, Love & Life Got In The Way" available at Amazon.com books, & Kindle, "The Covert Chamber" a mystery novel available at Amazon.com and Barnes & Noble, and "Forgotten" the story of two WWI pilots who were forgotten for over 70 years available on Amazon.com and Kindle
View all posts by misfit120 →
This entry was posted in current events humor and tagged astronauts, International Space Station, men, menstrual period, Michael Komienko, poop, Scott Kelly, Space travel. Bookmark the permalink.

2 Responses to Today’s Burning Question: What Happens When You Get Your Period In Space?”*