Powerball In Trouble. Lack Of Sales. WAIT!!!!!!! I Have A Solution Powerball Executives.

I was thinking the other day, which is very dangerous for me with only a half a functioning brain, (I’m old) about the latest concern those people who run the “Powerball” game have.

Which is, “OMFG we’re not getting as many people buying Powerball tickets anymore!!!! WHY! OMG WHY! Whadda we gonna do….OMG!!!!”

Of course, not having a damn clue, they will most likely do nothing until one of their in-house brainiacs suggests something new to revitalize the game. Like, offering an even bigger jackpot with more numbers, as they’ve done before, in the hope of attracting new players. Duh!

To quote that famous philosopher Sarah Palin: “How’s that workin’ out for ya?”

Which is why they continue to lose revenue because that plan isn’t quite working anymore.

Why, you ask? Well, I’ll tell ya. Because who TF wants to spend two or three dollars for ONE measly chance to win a gazillion dollars when you’re up against those insurmountable odds with all of the other states that participate in the Powerball drawing.

Unless you already have a gazillion dollars and can afford to buy a gazillion tickets for every drawing.

But, if you’re like me, (no brains) you have figured out the odds of winning considering a bunch of states participate in the Powerball drawing so basically your odds of winning are comparable to a snowball’s chance in hell.

Yes, I know people DO win the Powerball game. Usually some old 95-year-old one foot on a banana peel widow who says, when she’s interviewed, “Ahm gonna put it in the bank and save it.” To which all of her relatives urge her to do so hoping that the old coot will drop verrrrry soon. 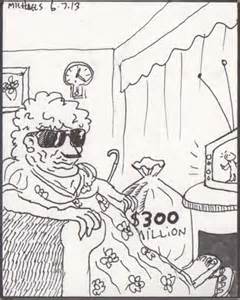 Bastards. Wait’ll they find out I’m leavin’ it to my cat

So I, being of insane mind and body have come up with the perfect way for those Powerball people to once again draw us lemmings into buying more tickets thereby increasing their revenue and saving the game from extinction.

Here’s my suggestion. First of all, EVERYBODY that I know, (three people) agree that they’d be happy winning ANYTHING! A free hamburger, Dunkin Donuts coffee, one dollar on a scratch off ticket.

Sooooooo. If we’re all contented with winning small stuff, HEY….why not give all of us the opportunity to win smaller jackpots. Like say when that Powerball jackpot gets up to a gazillion dollars, why not draw more than just one number. Makes sense to me.

Authorities have yet to find Mrs. Grosfernskis body

Example. Say Powerball gets up to $25 or $50 or $100 million dollars. Personally WTF am I gonna do with all that money? It’s waaaay too much for me to handle. I’d be perfectly content to win part of those jackpots. Like a quarter of $25 million. Or even a sixteenth. Whatever.

So why not have more than one drawing on the nights Powerball is drawn when those jackpots are huge? Say like 20 or 30 tickets for example.

HEY! Make a freakin’ reality show outta it for cripes sake. Can’t be any worse than all those other reality shows. AND….I bet the ratings would skyrocket too. Wouldn’t YOU watch if ya had 20 chances to win? And I’d bet you’d buy more than one ticket too.

BUT….if you do think you have a winning ticket…um….always double or triple check your number…..jusssssst in case you decide to do something stupid

So, if they draw say, 20 sets of numbers, and you had 20 tickets the odds are much better. AND….they could have entertainment while those numbers are being drawn. You know, like maybe dancing dogs or stupid cat videos to entertain us between those numbers drawings. How great is THAT!

AND…..besides making revenue off of ticket sales, they could sell commercial time and run commercials every 12 minutes like every other TV program does.

Is this a brilliant idea or what!

Maybe even hire a sexy model to draw those numbers as well. (sex always works when you’re trying to sell something…..just ask the people who run those Viagra commercials….I don’t even use Viagra but went out and bought some anyhow)

So that’s my great idea to save Powerball folks.

Which then gives all of us HOPE! 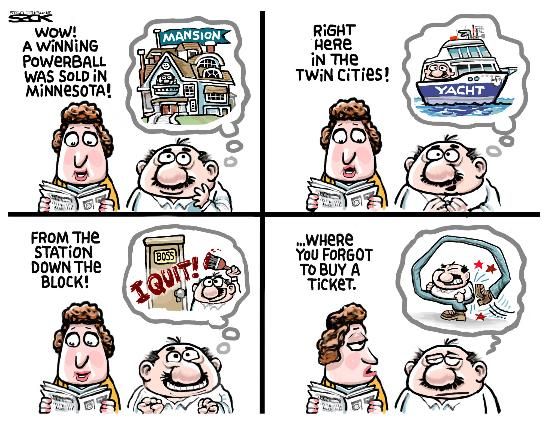 Now, because my idea is soooooo logical and makes absolute sense to me, obviously it will not fly with the corporate executives at Powerball headquarters.

Because they don’t have a freakin’ clue.

However, just on the remote chance that someone from Powerball headquarters reads this blog and says to themselves, “Eurkea! What a great freakin’ idea!”  I expect to be compensated for coming up with this idea.

Um, say like a complimentary Powerball ticket good for one complete year of Powerball drawings.

And if I still don’t win anything during that one year, I’ll come back again with yet another lame brained idea. Hey…..nothing ventured, nothing gained……as in when I “venture” out to buy a Powerball ticket now and “gain” nothing. 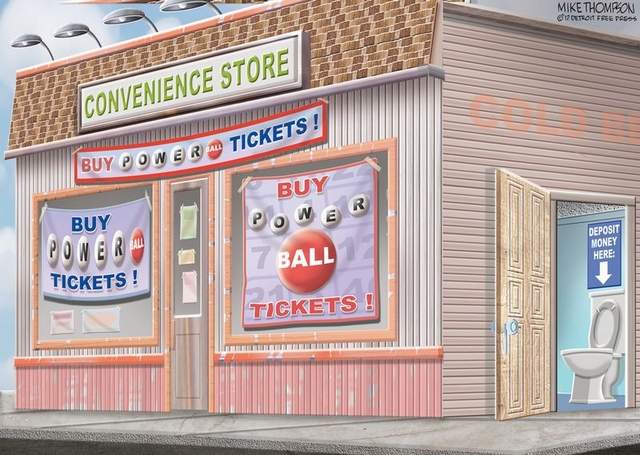 DONATE & SUPPORT: The MisfitWisdom PayPal donate link: (Copy and Paste the link to make a donation so I can buy a damn ticket) https://www.paypal.com/cgi-bin/webscr?cmd=_s-xclick&hosted_button_id=QQST38XT3YK78

Former disc jockey, (Dick Jones) 30 years, and author of, "I Could Have Been Famous But Sex, Love & Life Got In The Way" available at Amazon.com books, & Kindle, "The Covert Chamber" a mystery novel available at Amazon.com and Barnes & Noble, and "Forgotten" the story of two WWI pilots who were forgotten for over 70 years available on Amazon.com and Kindle
View all posts by misfit120 →
This entry was posted in Uncategorized and tagged jackpots, lottery tickets, powerball, the lottery. Bookmark the permalink.

3 Responses to Powerball In Trouble. Lack Of Sales. WAIT!!!!!!! I Have A Solution Powerball Executives.