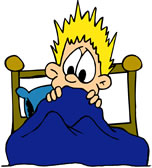 There I was, snuggled up under my electric blankie, afghan, hoodie, and one furry cat, (it’s New England in December) and ready for my wonderful comforting afternoon nap, (an old people ritual) when I began to fall into a deep peaceful slumber. Visions of sugar plums dancing in my head. (actually visions of Sofia Vergara’s sugar plums) 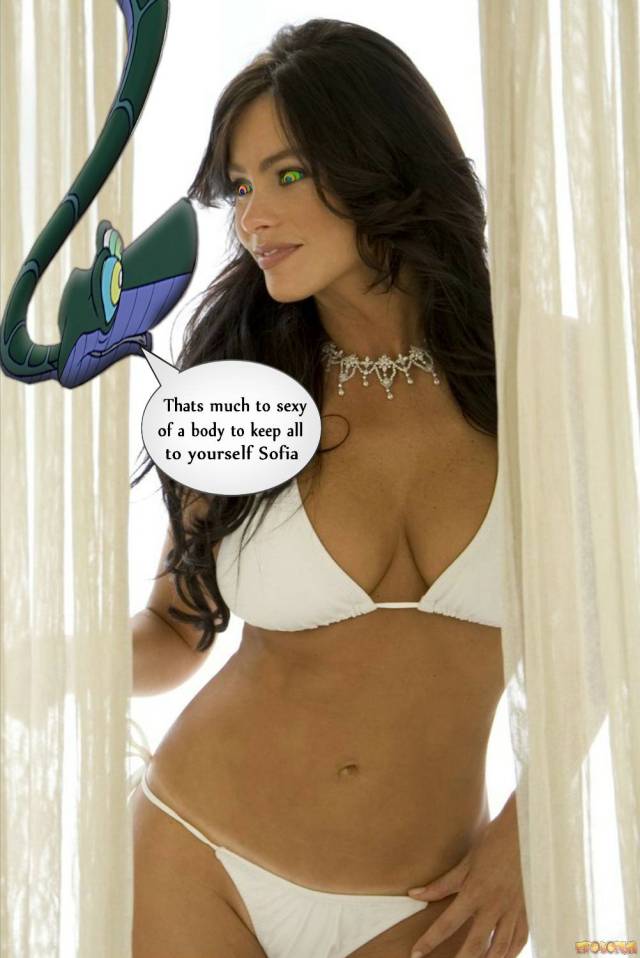 Yes Sofia……tis the season to share. (cartoonists misspell of the word “to”)

Then it happened. My recurring nightmare. Yes! The same freakin’ nightmare I’ve been having since the mid-term elections were finally over. I keep dreaming that it’s 2016 and it’s election time again. OMFG!!!!!!!!!

I broke out in a cold sweat once again and had to take two tranquilizers. Um, make that three.

Why in the hell was I dreaming about this? Why….why…..am I continually haunted by this terrible nightmare. Then….then…it hit me. The #!@*&%$# news media. They’re starting to make a list, and checking it twice, (Christmas season) of all the possible Republican prospects that might run for the Presidency in 2016. WTF!

GIVE ME A FREAKIN’ BREAK CBS EVENING NEWS!!!! (they were the last ones, Sunday night) that reported on possible candidates. Which most likely triggered my afternoon nightmare once again. WAIT……local news will be jumpin’ on the ol bandwagon verrrrry soon. 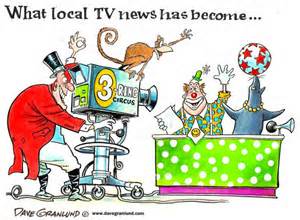 Alllllll those names kept floating around in my head, (like rotten sugar plums) and visions of endless TV commercials, (sandwiched between Viagra ones) and those same bunch of guys who wanna be President were right there in my face.

PLEASE……PULEEEEEEESE! Not now Gawd! It’s waaaaay too early for me to have these recurring nightmares.

But…..they keep happening. They will not go away. I’m doomed I tell ya. Doomed.

It’s gotten to the point that I’m now beginning to play candidate games in my mind as I attempt to doze off. How sad is that!

Like thinking that Rand Paul should reverse his name and be Paul Rand and have a name that at least sounds like it’s in order. After all, EVERYBODY knows someone called “Paul.” But Rand? Who TF names their kid Rand. Obviously someone named Ron. Makes sense to me. 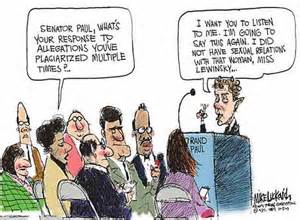 You AND Bill Clinton

And Ted Cruz. Cripes Ted, spell it the right way. “Cruise for Gawds sake. Then you could at least run your campaign showing cruise ships in the background and get people’s attention. Everybody likes to take cruises. Um, stay away from Italian cruise ships however. Just a tip there. 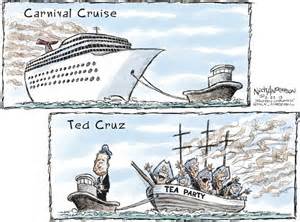 Marco Rubio is another one. The guy is so young-looking, about 9 years old, how can ya believe you could trust him holding the nuclear button. “Waa Waa Waa, I’m having a bad day and my little sister pissed me off….gimmie that damn button you bastards…I’ll show ya.” 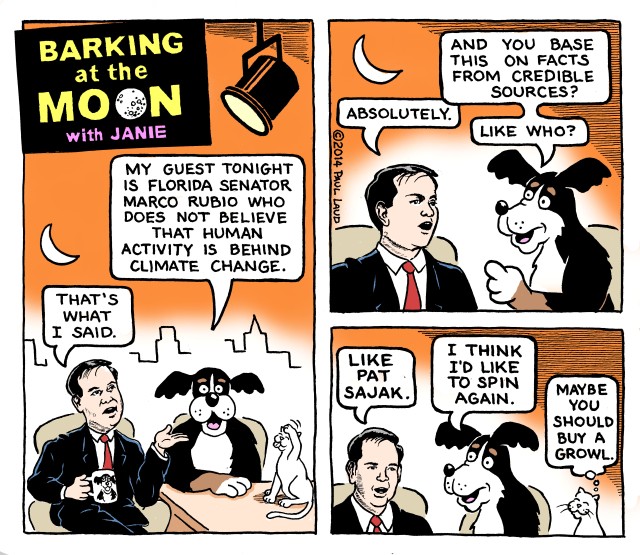 Bobby Jindal. Now I personally never cared for Bobby. One of the reasons is that I always hated the song, “Bobby’s Girl” by Marcie Blane. Cause I had to play it once every hour on some radio station I worked for years ago. Ruined me for life. 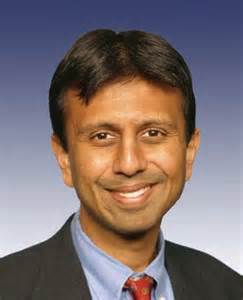 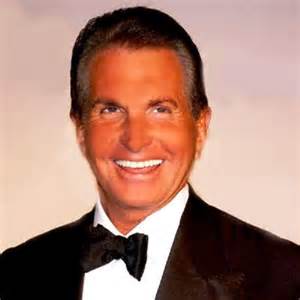 Chris Christie I kinda like because he actually has a pair of balls. (who knows, maybe more than two) because he says what he thinks, and usually it’s “F**k off you idiots, I’m gonna do what the hell I want.”

I like that in a candidate. BUT…..he’s had his problems, (Bridgegate or whatever) and he needs to come across as a nice guy. Like perhaps changing his name from Chris Christie to Kris Kringle. Advantage: Election time is one month before Christmas in 2016 so he could dress up as Santa Claus and get the little children’s’ vote. 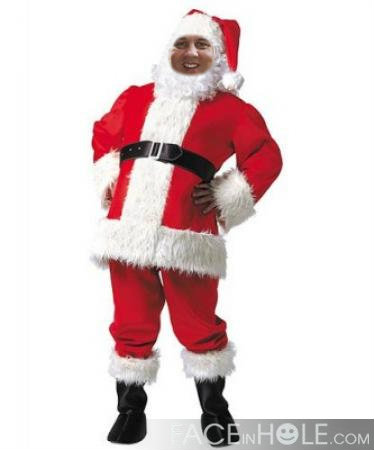 Then there’s Rick Santorum. Maybe he’s a great guy but his name, Santorum sounds like it was shortened from “sanatorium” and, considering he’s had a lot of strange ideas maybe he’s an escapee from an actual sanatorium, couldn’t remember his real name, and figured, “What the hell, I spent a lot of time there, might as well call myself Santorum. 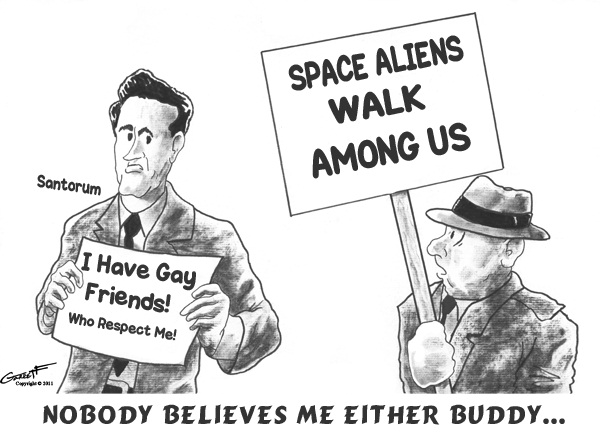 Birds of a feather flock together

Paul Ryan scares the bejesus outta me. No wonder I’m having nightmares just seeing him on TV with those werewolf eyes. Think I’m kidding. Watch a werewolf movie then get a video clip of Paul Ryan. Same guy. Honest! 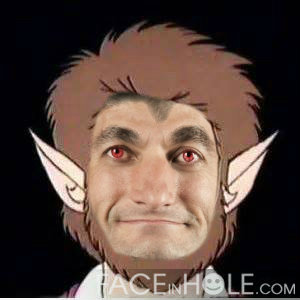 Tim Pawlenty, (who?) the Governator of Minnesota as far as I’m concerned stands a snowball’s chance in hell of EVER becoming President. WHY…….BECAUSE FOR THE MOST PART NOBODY OUTTA MINNESOTA KNOWS WHO THE F**K HE IS FOR CRIPES SAKE. Give it up Tim and save yourself a few million bucks. 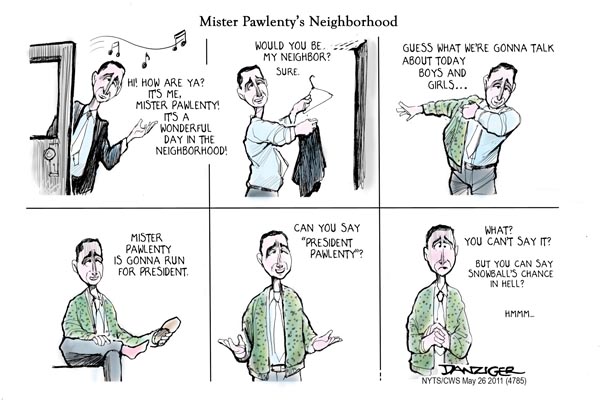 Same goes for South Dakota, (where?) where Sen. John Thune, (who?) is mentioned as a possible candidate. SOUTH DAKOTA!!!! Another place that’s so far out that even the deer and the antelope don’t play there. So how in the hell is this guy gonna garner any votes. Move Jim…..move……maybe to Hawaii. Worked for the last guy that won.

All three of them

Our final possible candidate is none other than Jeb, (are there any more left) Bush. Whose campaign slogan could really be a catchy one. “Another Bush in the White House is like two former Presidents in the Bush.” Kinda like a twist on the ol bird in the hand thing.

Then there’s always the sexual innuendos having the name “Bush” that the other two Bushes didn’t take advantage of. If ya catch my drift here. Jeb could cut a deal with Playboy Magazine and REALLY promote the “Bush” name. (sorry, couldn’t resist that one) 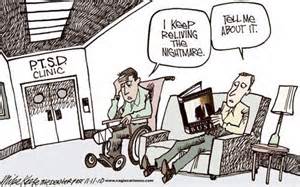 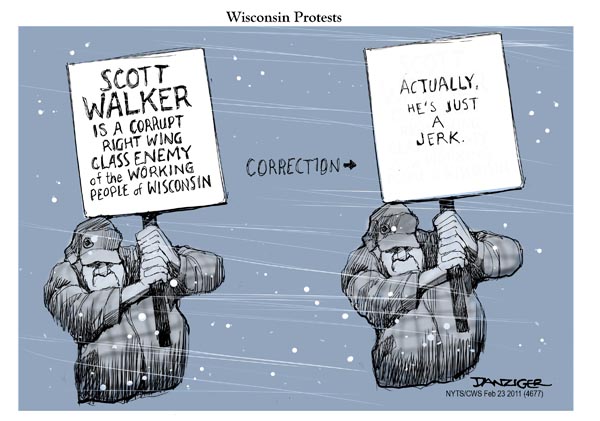 Mike Huckabee, because I can’t even begin to imagine the field day cartoonists will have if he got elected. (Think Huckleberry Finn folks) 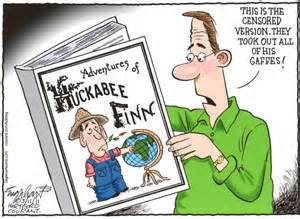 Mitt…..Mitt…..before you decide to jump in call Linda McMahon or Tom Foley in Connecticut. Unless you wanna join that exclusive two loser club. 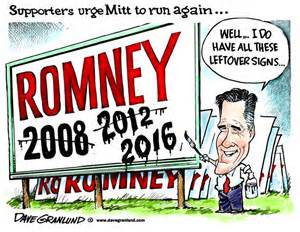 Mitt. Remember that old motto: If at first you don’t succeed, give the f**k up for cripes sake.

Ok…so now you see why I’m already having nightmares. I see all these campaign ads comin’ down the pike. And it’s not even close to election time.

OMFG how worse can this get? What could possibly push me over the edge and send me back into campaign ad therapy? Worse……give me even more horrible nightmares…………… 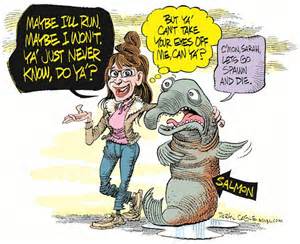 “Hello…..Doctor Frosklinker. This is Misfit….um….I think I’m ready for you to up my tranquilizers to 1,000 milligrams and yeah, I’ll be rescheduling my visits to every other day thru 2016.