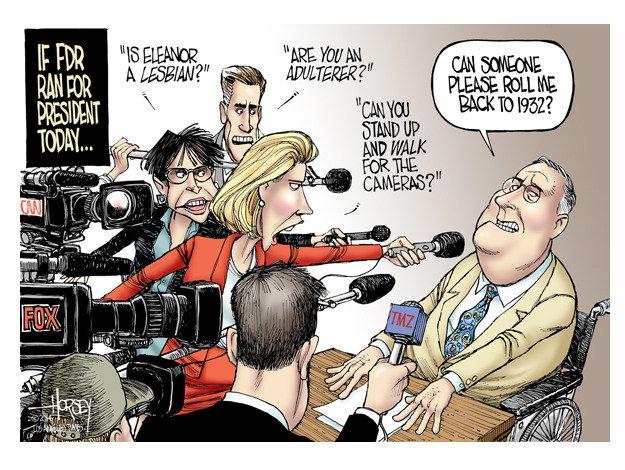 Now THIS guy I’d vote for. Simply because his ad would be obviously 5 seconds long and he’s not doing any negative campaigning about his opponent having an affair with a hooker, skimming funds from the Girl Scouts, screaming about creating jobs, and is not wearing either a red or blue necktie. (standard attire for Democrats and Republicans) And lastly, and most important, ya gotta feel sorry for anyone who has a first name like Grover.

Do these idiot politicians actually think that running all these negative ads every 5 minutes on national and local TV work?

The answer to that question is YES. Negative ads do work. Because most voters are already set on who they’re going to vote for simply based on their party affiliation. So, if you’re a Democrat, you love negative ads about the Republican candidate. And vice versa. 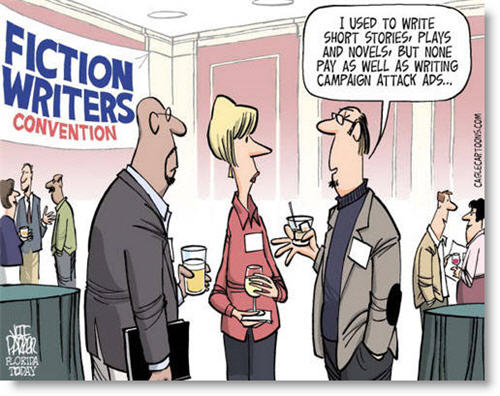 What a  candidate will do for you, the programs they have planned, how to make things better. Nope….most voters don’t give a rats ass about that stuff. Honest! The more each candidate slams the other is what sways voters.

For instance. And I’m basing this on my own conclusions after watching a few debates not only here in my home state of Taxnnecticut, but other states as well.

I watched the debate between former Florida Governator Charlie Crist and present zombie looking Governor Rick Scott. Sooooo. Who got my vote? If I could actually vote in Florida. Obviously Charlie Crist because he doesn’t look like a freaking zombie and I’m terrified of zombies. 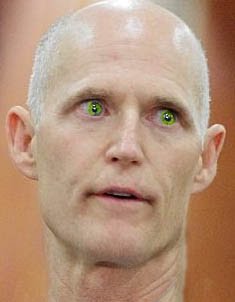 I rest my case 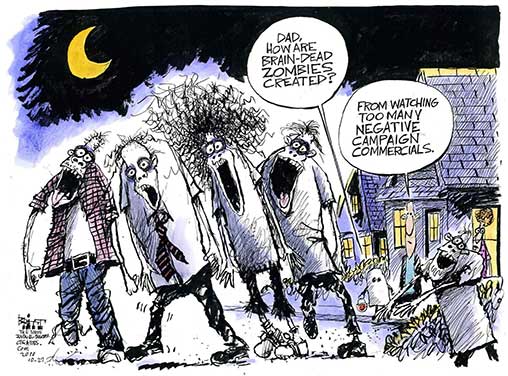 And staring at photos of Rick Scott 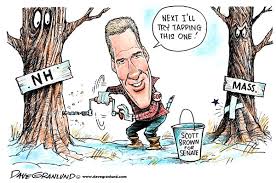 Hey Scott, if ya lose there’s still four more New England states you could run in. Of course my thinking is that men will not be impressed with Brown’s good looks or that he posed naked. Women on the other hand…..welllllllllll.

Um….this is a close race. My suggestion. Jeanne…….quick….call AARP Magazine and see if they can do a sexy layout centerfold for ya. Hey! Worked for Helen Mirren. And she’s not running for anything…but, she’d sure as hell get MY vote. I’m shallow that way folks. 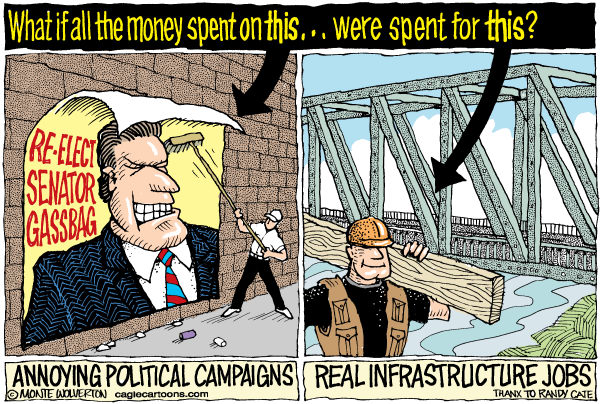 Like a bridge over troubled waters………….sorry…..Simon & Garfunkel came to mind

Now here in Connecticut we have an interesting race for Governor between incumbent Dannel Malloy. (his parents flunked spelling when it came to naming him or, they’re big fans of actor Willem Dafoe) Ya have to think about that one.

So as I see it, Malloy has problems with speaking complete sentences without using a bunch of um, ah, ers, and pregnant pauses. Tom Foley, Malloy’s opponent, had some sort of medical condition that makes one of his eyes looked half closed. THAT”S what I’ve been centering on with both candidates. 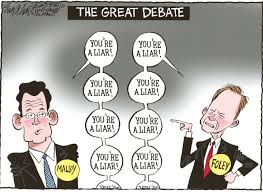 Do I want a Governor that takes fifteen minutes to say something with all those ums, ahs, and ers, or the other candidate that for some reason scares the bejesus outta me.

“Governor Malloy, there’s a big safe falling outta a window about to crash down on you. Whaddya ya gonna do?”

On the other hand.

“Mr. Foley, here’s your campaign commercial. Ok….go ahead…… take one.”

“Hi, my name is Dannel Malloy and I’m running for Governor……..”

“NO NO NO Tom. You’re reading the wrong lines. Stop looking at the other page that has Malloy’s name on it with your bad eye for cripes sake!”

For the most part…um….WAIT!  That should read, for what it’s worth there’s no, nada, zilch, political campaign commercial that has EVER swayed my vote….NEVER!!!!!!!!

I’m still waiting for a down to earth honest  (cough) politician to promise something that makes sense to me rather than being bombarded with all those negative ads in order for any commercial to sway my vote. Like this one for instance: 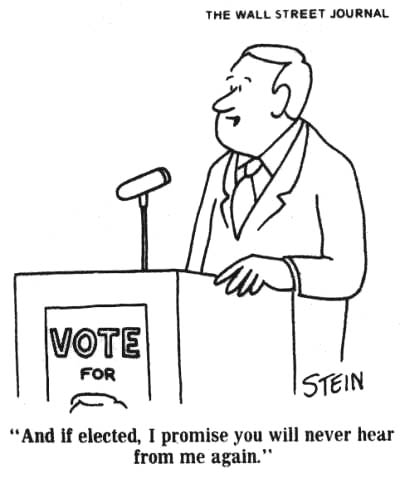 Come to think of it, I did vote for this guy in Connecticut….and he was right

When Hunter Thompson was running for sheriff of Pitkin County in 1970 he promised to he would tear up all the asphalt in Aspen, replace it with sod, and use the asphalt to build a parking lot just outside the city.

Now THAT’S my kinda politician. Who gives a rats ass about job creation, deficits, and all that other political crap that no politician is ever do anything about. Nope…but replacing asphalt with sod……hey……sounds like a great idea to me. I’d sure as hell watch Hunter’s political commercial and vote for him too.

Give me some freakin’ sensible proposals in your damn campaign commercials you idiots.

“Vote for me and the first thing I’ll do is ban all TV political campaign commercials in prime time and schedule them between the hours of 12am and 4am.” 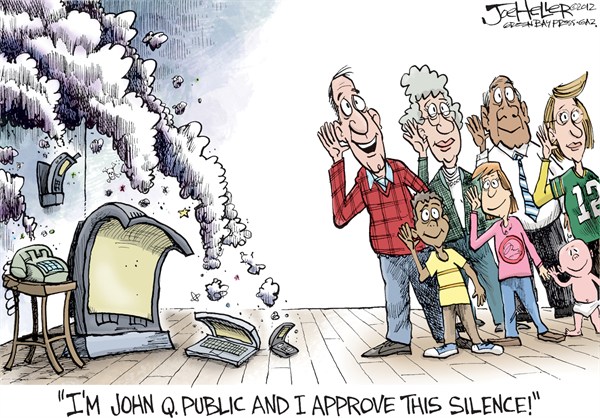 “Vote for me and everybody gets a check in the mail for $5000 because I’m filthy rich and rather than buying this election with the help of the Koch Brothers I’ll buy it directly from you.” 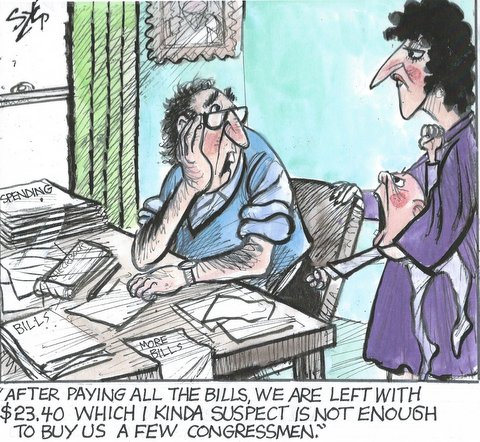 Um, Monica’s upstairs. Wanna ask her to do her closet thing again honey?

“Vote for me because I’ve lied my ass off about everything, BUT, at least you know what the hell you’re getting.”

And finally, surely the best campaign ad to get any politician elected by a damn landslide, “Vote for me. I don’t know a damn thing about politics, government or how to balance a damn budget or create j0bs. But, I’m a hilariously funny guy that’ll keep you in stitches with my own TV reality show. My motto: Hey why fret the big stuff when ya can have a good laugh.” 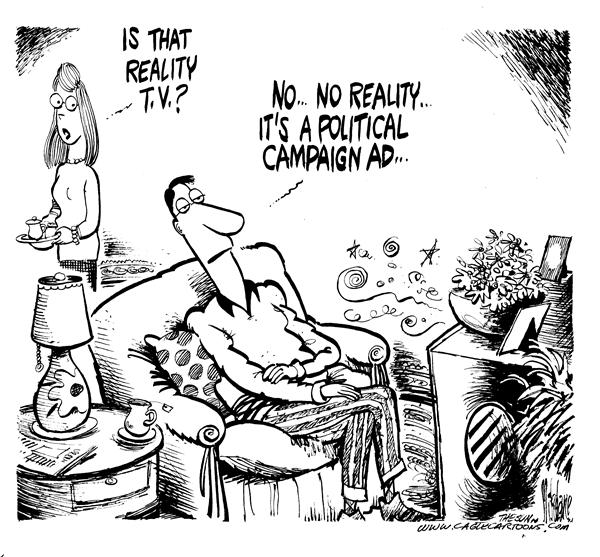 Similar to “Nightmare on Elm Street” minus the blood and gore….I think

So folks, don’t forget to vote today for the candidate of your choice. For WHATEVER idiotic reason that might be.

DONATE & SUPPORT: The MisfitWisdom PayPal donate link: (Copy and Paste the link to make a donation to my campaign….which is….I’ll never run for office)

Former disc jockey, (Dick Jones) 30 years, and author of, "I Could Have Been Famous But Sex, Love & Life Got In The Way" available at Amazon.com books, & Kindle, "The Covert Chamber" a mystery novel available at Amazon.com and Barnes & Noble, and "Forgotten" the story of two WWI pilots who were forgotten for over 70 years available on Amazon.com and Kindle
View all posts by misfit120 →
This entry was posted in Uncategorized and tagged Election 2014, mid-term elections, political ads. Bookmark the permalink.