It’s Time To Say Goodbye To The MisfitWisdom Blog

All good things must come to an end. Or, really sucky things too, depending on your opinion of the MisfitWisdom blog over the past 5 years. And so, it is with great sadness that I must say goodbye.

This was by far not an easy decision for me. But I felt it coming for some time now.

Many factors contributed to my decision to end this blog.

First and foremost, that after five years of writing I can no longer attract readers such as other sites who have thousands of followers on a daily basis and receive “likes” on their blogs.

As in a comedian receiving applause for their performances, a bloggers applause for writing  is the number of readers or “likes” he or she has on any given day. When you receive those “likes” or your followers number in the thousands, then you know writing your blog was well worth the effort.

My personal view of why I do not accumulate those numbers is due to the fact that today’s society is more interested in volatile in your face blogs that either provoke or spread hate and discontent, or simply blogs that feature specific content such as pets, how to do things, celebrities, and how many ways to use the word “f**k” in an attempt to piss off people.

Those blogs receive hundreds, if not thousands of followers on a daily basis. As I said, after five long years of writing, I have not achieved that status in numbers.

Devoting at least 3 to 4 hours a day writing this blog requires a lot of time and effort on my part. True, I did enjoy finding humorous things to comment on and attempted to make certain points on cutting edge issues as well as nonsensical stuff as well.

However, even through humor you sometimes, on many occasions, tend to bring out those who I refer to as trolls who never see humor in anything. It is their main goal in life to spread hate and discontent. And, they do a pretty good job of it.

One final swipe at, in my opinion the major cause of a lot of hate and discontent, “Fox News” and it’s founder Rupert Murdoch. Just take a look at this headline in the N. Y. Post the other day with regard to the Clinton’s new grandchild. Then tell me I’m wrong about Murdoch’s empire spreading hate and discontent. 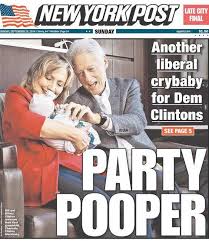 So, that said, it’s time to let others who make more of an impact carry on the banner of attempting to spread humor, instead of hate and discontent. I’ve  just about had it.

But, I want to thank specific followers who did make my day by commenting from time to time and for making donations to this blog.

Charlie in Australia who by far was the most influential of all of my blog readers who gave me the incentive to carry on when many times I wanted to just throw in the towel. And also made a few sizeable contributions for my creative effort. Thank you so very much Charlie.

Katy Anders in Houston, Texas who also has her own blog, but never let a week go by without making a comment. Thanks Katy.

John Roycroft, who also faced an uphill battle when it came to his own blog and eventually scrapped it and on occasions writes under a different heading. I know we’ve had our differences politically John, but at least you took the time to repost some of my blogs and comment as well. Thanks.

Sandra Barton from way up North, (Canada) who commented from time to time. Thanks.

On other social media sites such as “Sodahead,” “Twitter” and “Spire” my tip of the old Boston Red Sox cap to those of you who took the time to post comments on those sites.

And finally, to my dear friends Tom, Bobby, and Sue & Rocky, for their support over the years. If I missed anyone, my apologies, but just know you are appreciated.

And finally to my other half, Leilani, who edited my blog before posting each and every day and laughed at what I wrote….even though I know she was pretending, (only kidding) my deepest appreciation for putting up with me during my ups and downs while writing each and every day. Love you.

So folks, thanks to those of you who followed this blog for the past five years. It was a great ride and my heartfelt appreciation to all of you.

Perhaps, from time to time I might pop in and say something. Then again, I just might lay back, enjoy life, and as my blog header says, screw it, “Do I Look Like I Give A Rats Ass.”

In closing, for the final time, I’d like to leave you with my favorite saying:

“Some people come into our lives and quickly go. Some stay for a while and leave footprints on our hearts. And we are never, ever the same.”

I’d like to think you would think of me that way.

Former disc jockey, (Dick Jones) 30 years, and author of, "I Could Have Been Famous But Sex, Love & Life Got In The Way" available at Amazon.com books, & Kindle, "The Covert Chamber" a mystery novel available at Amazon.com and Barnes & Noble, and "Forgotten" the story of two WWI pilots who were forgotten for over 70 years available on Amazon.com and Kindle
View all posts by misfit120 →
This entry was posted in Uncategorized and tagged Australia, Canada, Jason Mraz, John Roycroft, Katy Anders, Sandra Barton, Tina Roenhovde, Vienna. Bookmark the permalink.