Personally I would have chosen the halls of Congress, but, WTF do I know.

Anyhow, what is becoming the worst place on earth, according to an article in the “New York Post” is Times Square in New York City.

Why? Because of the following: Traffic, tourists, construction, along with an array of characters, which include, nudists and hawkers.

There’s also a negative side. But I haven’t discovered what that is yet.

Matthew Lineham, 26, of Brooklyn who has been selling tickets to comedy shows in Times Square for three years says, “More and more people are running scams. Mascots and people selling tickets are aggressive. I see Spider-Man mugging people all the time.”

OMFG! Spider-Man is mugging people? Holy crap! Next you’ll be telling me that actual muggers are mugging people. But Spider-Man! Ohhhhh what a wicked web we weave, when Spider-Man attempts to relieve, a person of their wallet.

It’s gotten so bad that the “Times Square Alliance” is pushing for a law that would require costumed characters to register with the city in order to ply their trade.

I have no idea if this would include hookers, as they too are kinda like in costumes, and plying their trade.

Hey pal, for just $5 bucks we’ll do our version of “Afternoon Delight?”

Two New York Post reporters, Michael Gartland and Stephanie Pagones, who had nothing better to do, toured the area last week and noted that what they saw “wasn’t the hooker, pimp, junky-packed Gomorrah of the bad old days, but that it wasn’t pretty either.”

As I recall, fondly, during a trip to Times Square back in the late 60’s, there were establishments called “peep shows” that, for a mere twenty-five cents, you could walk into a booth, (telephone size), deposit a quarter, and a window would open up exposing a semi naked-woman dancing in front of you.

Might still be some of those places there. Have to check that out.

Along with the cost of everything rising these days, your quarter might only get you 10 seconds of ogling time. Might wanna carry a roll of quarters with you just in case.

Some of the sights those two reporters observed: 10 cartoon characters and superheroes clogging a pedestrian island. Elmo and Minion in costumes who took off their costumes and puffed on cigarettes. Three Statues of Liberty. A tatted-up, 5 foot tall version of “Bane” a villain from “Batman.” Captain America and some guy holding up a placard that said, “Before I formed you in the womb, I knew you – God.” 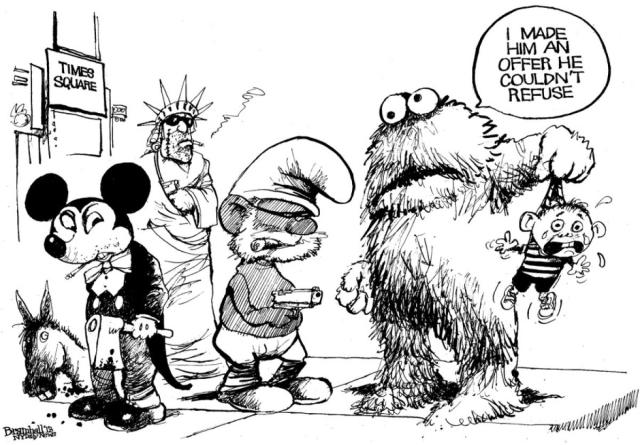 Sounds like kinda like it was a very dull day for those two reporters what with no naked women in costumes.

WAIT! Naked women don’t have costumes. Which is most likely why there were no naked women in costumes in Times Square. Just plain naked women with tattoos.

And the article quoted a British tourist who said to his wife, ” Apparently Americans will do anything for money.”

YES! That’s true. We Americans WILL do anything for money. Ya notice I never stop asking for donations to this blog for creative effort. But never get any. Perhaps I should use some of the tactics those people in Times Square use.

Like constantly show naked or semi-naked photos in this blog. Have a pop up window that allows readers to observe semi-naked women dancing. Or semi-naked cartoon characters. Like perhaps Porky Pig and Donald Duck not wearing any pants.

Um….damn……they don’t wear any pants as it is. Rats!

I’m tellin’ ya it’s just hard to make an honest buck these days. Way too much competition out there. Especially in Times Square.

I mean it’s not like I can drive to New York City every single day, set up my computer on 42nd street and beg for tourists to drop a buck or two into a basket if they wanna read my blog. Cripes, all of you get it for nothing now!

Nope. It’s useless. There’s no way I can compete with the nudists, semi-naked women, peep shows, and cartoon characters in Times Square. (sigh)

One of the main reasons is that, at my age, and being a male, no one wants to see a semi naked old man walking around Times Square or in a peep show. Who TF is gonna fork over a damn quarter to see THAT!

Unless THAT is the catch.

I’ll go to Times Square and write my blog while naked and hold up a biggggg sign that says, “NAKED OLD BLOGGER WRITING A HUMOR BLOG. IF YA DON’T WANNA GET NAUSEOUS AND BARF YOUR BRAINS OUT, DROP A BUCK INTO THIS BASKET AND I’LL GET DRESSED.”

Hey! Can’t be any worse than peep shows, pimps, hookers, cartoon characters and dodging city rats can it.

Former disc jockey, (Dick Jones) 30 years, and author of, "I Could Have Been Famous But Sex, Love & Life Got In The Way" available at Amazon.com books, & Kindle, "The Covert Chamber" a mystery novel available at Amazon.com and Barnes & Noble, and "Forgotten" the story of two WWI pilots who were forgotten for over 70 years available on Amazon.com and Kindle
View all posts by misfit120 →
This entry was posted in Uncategorized and tagged Batman, Captain America, cartoon characters, hookers, N. Y. Post, nudists, peep shows, Porky Pig, Spiderman, Times Square. Bookmark the permalink.