In the short existence that we men spend here on earth, mainly because women drive us all to an early grave, I’ve come to the conclusion that it’s never a good thing to EVER argue or disagree with ANY woman about ANYTHING.

Makes sense to me

Yes, I freely admit I’ve been married and divorced twice, (temporary insanity) and I freely admit I would NEVER do that EVER again. Unless I met a woman who was knockout gorgeous and was filthy rich.

Um, let me clarify that. Unless I met a woman who was filthy rich. I could live without the gorgeous part. Some things money does buy. Like taking trips away from the woman you’re married to.  Jussssst in case she was filthy rich, but butt ugly.

Anyhow, having been in a domestic relationship with my other half now for over a decade, I still tend, on occasion, to forget the basic rules of man/woman relationships.

Which is the same as when a tree falls in the forest. Does it make a sound?

And in relation to men. If a man is wrong and there’s no woman around to correct him, is he still wrong, or, can he simply say, “Hey, who the  f**k is gonna know I was wrong.” Something like that anyhow.

Now in my own relationship I come across many instances where my other half IS wrong. Most of the time I DO NOT attempt to correct her. I’m not THAT stoopid ya know. Because, as we men all know, we are ALWAYS wrong.

BUT…..sometimes I forget the golden man rule. Which is never question a woman.

For example. A simple task as piling up the weeks newspapers, placing them in a neat box so that they can be easily transported to the town dump. Which, by the way is my other half’s favorite place. The aroma I guess. Eau de dump or something.

Anyhow, she usually takes the newspapers down to the basement and stacks them in various containers. Now keep in mind it’s usually two to three weeks between dump trips. Which may be a reason she seems to be testy some mornings. Dump withdrawal symptoms.

Soooo, those papers build up, and build up, and build up. Now, comes dump day, (very exciting) we both venture downstairs to gather up dump stuff, which has to be sorted, lest you piss off the dump attendants who watch you very closely to make sure you do not mix up which container to throw stuff in. They also work part-time for the Mafia.

Sooooooooooo, I say to my wonderful considerate other half, “Hey, why the freakin’ hell didn’t ya put all those newspapers into that one box I left open for ya so that we wouldn’t have to pull them outta several other containers and waste time?”

To which she replies, “Hey ya freakin’ dummy, that’s your job.”

Can ya feel the love there?

So, my mind says, “Tell her you told her a few weeks ago that you’d leave that box there so that she could pile all of the papers into one box and make it a simple chore come time to go to the sacred dump.”

But my brain overrides my mind, and says, “”What, are ya freakin’ nuts. She’s only gonna say that it was your job and that’ll piss you off even more.”

And my brain was correct. As usual. So I left it at that, rather than try to explain logic to her that if she had placed the papers in that one box the last two weeks all we would have to do is close the box and we’d be on our way to the dump…..happily.

Now I thought of all this because I think it’s imperative that all men have man caves. Or as I said initially, at least a cave.

WHY? So that in instances where we men want to employ the use of simple logic, which we’d obviously be wrong at, it would be a lot easier to simply go to the cave, and scream our lungs out. Then perhaps have a beer. Or strangle to death some innocent animal.

Now I’m sure each and every man reading today’s blog will attest to the fact that logic simply does not work when trying to reason with any woman. So why is it we keep trying?

My advice is to simply just say, “yes dear,” or “you’re right dear,” or accept that universal woman explanation for everything you ask them, which is, “Because.” And then be done with it.

My final example of all this woman stuff is a continuation of our enjoyable trip to the dump.Which again, will prove to all of you men that the word “logic” is not programmed into any woman’s brain.

And you thought God did not have a sense of humor. 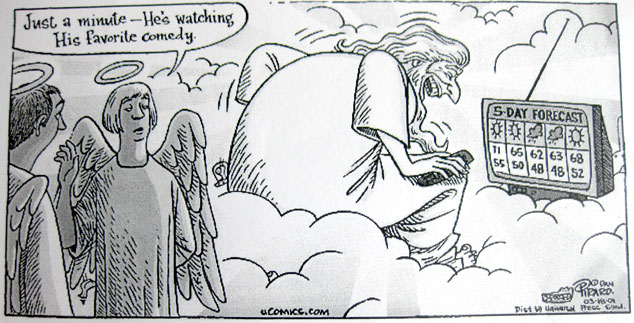 Soooooo, we’re riding in the truck to the dump and just as I get to the turn off from the main road, which we’ve done a gazillion times in the past, she turns to me and says, “Geez, how come they don’t have a big sign that says “town dump?”

And I turn to her and say, “Well dear, it’s not like it’s a tourist destination ya know.”

My logic to her was that if you live in our town, you sure as hell know where the damn dump is and do not need a sign to tell you where it is.

So she replies, “Well, they still should have a sign.”

So, rather than once again get trapped into using logic on her ever again, I have decided to just agree with her on everything.

What I was thinking while at the dump

After all, we’ve been living together for over a decade and so far we haven’t killed one another. Which, when ya think about it is remarkable.

Considering that in those two past failed marriages I always challenged both my ex’s, which may have contributed to those ultimate divorces, and that one time I cleverly avoided that hit man one of them hired.

And all because I used simple logic and asked why some other guy was sleeping in my bed.

Which the answer to was……….”because.”

(UPDATE) On the 29th of May I posted the story about that guy in Australia who is selling the word “THE” on eBay and has received over $10,000 in bids. So, as an experiment I posted my autograph in my book on eBay just to see if I could get any bids. So far, zilch. Only five days left to bid for cripes sake! WTF! As in What “THE” f**k!

Former disc jockey, (Dick Jones) 30 years, and author of, "I Could Have Been Famous But Sex, Love & Life Got In The Way" available at Amazon.com books, & Kindle, "The Covert Chamber" a mystery novel available at Amazon.com and Barnes & Noble, and "Forgotten" the story of two WWI pilots who were forgotten for over 70 years available on Amazon.com and Kindle
View all posts by misfit120 →
This entry was posted in Uncategorized and tagged God, logic, man caves, marriage, relationships. Bookmark the permalink.