What’s With The Obsession With Nazi’s After All These Years? And That Guy Sieg Heil.

In a lot of news stories about radicals and nut jobs there always seems to be some obsession or connection to Nazis. You know, those no goodniks from World War II.

Which I’m mentioning jusssst in case you never heard of Nazi’s and think it refers a slang term for sneezing and stuff coming outta your nose. Which may have been actually called, “snotzies” but shortened to Nazi’s. My guess anyhow.

As an example, look at that whack job who was recently in the news, Cliven Bundy. 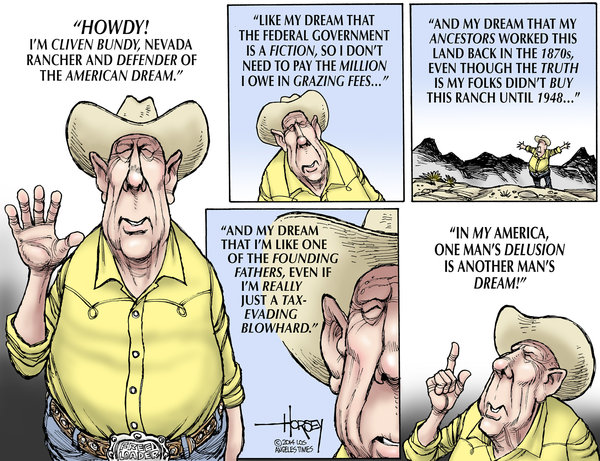 Recently in Las Vegas there was a standoff at his ranch and one official was quoted as saying with regard to Bundy supporters:

Some of them didn’t need much to get riled. Their hostility toward government was on full display. A few equate the BLM, (Bureau of Land Management) with Nazis.

“That bunch, the SS squad or something to do with Hitler, shouldn’t have guns there aimed at the people,” one man at the showdown said.

So once again Nazi’s come up in the conversation. I don’t get it?

Then there was that guy Norman Rockwell, another nut job who…..um…er….oops, sorry, That’s not right. Sorry Norman.

Norman was a great artist for the “Saturday Evening Post” and may have drawn a few cartoons about WWII but he wasn’t a bad guy. Like the guy I really meant to name, George Lincoln Rockwell, who dressed up in Nazi clothes, but never dressed up as Abe Lincoln. Which is kinda strange considering his middle name was Lincoln and not Adolf.

Now I must admit, (sheepishly) that I myself am a bit fascinated by Nazi’s. Not because I admire them, not in the least, but by the uniforms the elite of Nazi’s wore. It’s like, “Holy crap, did THEY have a neat tailor or what!” And that clicking boot stuff. No self-respecting Nazi movie would be complete with some no goodnik Nazi clicking his boots.

I suspect this all started when one of those sharply dressed Nazi’s stepped in dog crap and was simply trying to get it off his boots. From there it just took off.

And, as we all know, there have been many a Nazi movie made over the years. Most recently Brad Pitt, (not to be confused with a peach or plum pit) starred in “Inglorious Bastards,” and most, most, recently George Clooney in “The Monuments Men.” Which I originally thought was a movie about Mount Rushmore.

And, of course, thinking that other people might be still fascinated by Nazi’s, wrote my own novel two years ago entitled, “The Covert Chamber.” Which so far has sold 1 copy. Most likely because there were no Nazi pictures in my book. Nor any of that famous and mysterious Nazi guy, “Sieg Heil.”

But, back in 1943 Walt Disney actually had Donald Duck star in a Nazi cartoon and it was a hit. Go figure.

Maybe I should have put a duck in my book too. 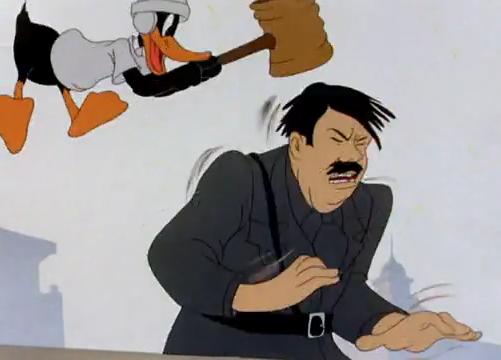 Then in 1942  Spike Jones added to mocking Der Fuehrer.

Then again, had I a photo of Sieg in my book it many have been a best seller considering there are no known photos of Sieg and I’m sure that would have been a selling point had I been the first writer to show a photo of him.

Personally, and this is my “unbiased” opinion, I think my book would make for a great movie. I mean it has Nazi’s in it, (the bad guys) a reporter, his girlfriend and a cat, ( gotta put a cat in a book to attract cat lovers) and a murder, (I didn’t wanna kill the guy in my book but he was old anyhow) and finally a lot if intrigue what with spys, the CIA, a strange device that does strange things, (kinda like a vibrator, but more intense) and finally the cat Sylvester, who resembles my cat Spencer, who now wants a cut from the royalties from my book, Which, so far is $8.00.

Sylvester, AKA Spencer, attempted to block the photographer from snapping this pic in his U.S. Army Quonset Hut.

Yes, those Nazi’s were really bad guys. Which is why the U.S. after WWII hired a lot of them to design some really neat uniforms for us. AND they did this through a secret organization called “Odessa.” They originally wanted to call it, “The Secret Organization To Smuggle Nazi’s Out Of Germany,” but felt the shortened version of, “TSOTSNOOG” wouldn’t play very well when the movie was made.

Much too long to put up on a theater marquee too.

Which is why they called a movie about all that stuff, “The Odessa File.”

So, considering it’s been well over 60 years since actual Nazi’s were roaming the earth, it’s mind-blowing that those movies still attract the younger generation. That radical idiots still evoke the memory of Nazi’s. That some Nazi’s are STILL being hunted down after all these years. ( Simon Wiesenthal Center)

BUT…..write one stinkin’ novel about Nazi’s and do ya think it sells?

Maybe I should have written my book about how “Saturday Night Fever” was Hitler’s idea.

Um, maybe not. I think there was already a musical about Adolf.

Along with Mel Brook’s “The Producers.”

Maybe I should be concentrating on doing a revision of my book. Something that will appeal to EVERYONE regardless of your opinion of rotten no good Nazi’s.

As I mentioned earlier, some Nazi’s were really sharp dressers. All I have to do is contact the Simon Wiesenthal Center and ask them if they can give me the name of the tailor that made those Nazi uniforms.

THEN contact him, providing he’ still alive and not a piece of spaghetti thread, and ask him all about his life as a Nazi tailor. Just think of the possibilities of this being a huge best seller.

It was at this point that Hitler’s tailor suggested that the Fuehrer grow a moustache, and a set of balls, that propelled him into designing tight-fitting Nazi uniforms rather than Nazi three-piece suits.

“How Threading For The Nazi’s Kept Me In Stitches.”

Former disc jockey, (Dick Jones) 30 years, and author of, "I Could Have Been Famous But Sex, Love & Life Got In The Way" available at Amazon.com books, & Kindle, "The Covert Chamber" a mystery novel available at Amazon.com and Barnes & Noble, and "Forgotten" the story of two WWI pilots who were forgotten for over 70 years available on Amazon.com and Kindle
View all posts by misfit120 →
This entry was posted in Uncategorized and tagged "The Producers, Donald Duck, George Lincoln Rockwell, Nazi's, Norman Rockewll, Saturday Night Fever, selfies, Spike Jones, Springtime For Hitler, The Covert Chamber. Bookmark the permalink.

2 Responses to What’s With The Obsession With Nazi’s After All These Years? And That Guy Sieg Heil.