Sooooo little boy. You wanna grow up to be a despicable Congressman. How nice.

Once upon a time there was, and still is, for the time being at least, if the FBI have their way, a “grimm” Congressman from New York. Actually his real name is “Grimm.” ……Grimm to be exact. And this seems to be sort of a “grimm” story considering he seems to be in a bit of trouble for allegedly doing some “grimm” stuff whilst a Congressman……..which the FBI found to be despicable because he was once a FBI agent himself.

Despicable I tell ya……despicable. (To quote that famous duck)

If you weren’t under a rock you may recall Congressman Grimm when he made the news after attending the President’s State of the Union address earlier this year. He was caught on tape threatening to throw a reporter off of the Capitol’s balcony while yelling at him, I’ll, “break you in half, like a boy.”

Kinda a “grimm” threat if ya ask me. 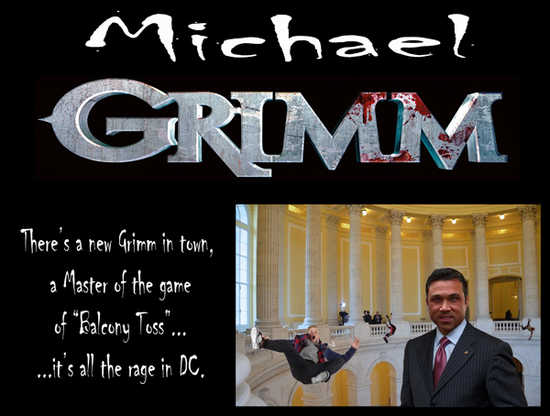 “So Congressman Grimm, what’s your comment on the charges that you under reported the wages and payrolls at your “Healthalicious” health food store you owned back in 2008?”

“WHAT the f**k you talkin’ about you damn panty waist snipe. I’ll kick your sorry ass butt offa that balcony over there and you’ll need some freakin’ healthcare yourself ya damn jerk!”

“Ok…um….then what about the charges that you concealed more than $1 million dollars in gross receipts, and hundreds of thousands of dollars in employee wages?”

“OK asswipe, yer askin’ for it now. Come here pal, I’m throwin’ your sorry ass offa the balcony. And you….news cameraman, shut that f**king camera off or you’re next!”

“Oh…yeah, sure Congressman. But um, do ya mind if we film that mangled up reporters body in the lobby first? Really would make for a “grimm” news story on the six-o-clock news tonight.”

Sooooo, what’s up with Congressman Grimm and the “grimm” charges brought against him by the FBI? I thought you’d never ask.

As I mentioned earlier, the charges are that he under reported the wages and payrolls at his “Healthalicious” health food store 2008? Along with concealing $1 million dollars in receipts.

As usual, Grimm denied all of the accusations, as any self-respecting politician caught on camera would do.A spokesman for the Congressman issued this statement:

Like yeah, ANY Congressman is gonna come out and say, “Yep, I did it, I’m guilty, arrest me now. I’m sorry. Boo hoo.”

Kinda like when you watch one of those TV crime shows and they’re interrogating the perp and they always ask him, “Did you kill your wife with an axe?”

“Um, we could watch reruns?”

I especially like the next statement issued by the Congressman’s spokesman. Actually brought tears to my eyes as I envisioned the Star Spangled Banner playing in the background as his statement was read.

“When the dust settles, he will be vindicated. Until then, he will continue to serve his constituents with the same dedication and tenacity that has  characterized his lifetime of public service as a member of Congress, Marine Corps combat veteran, and decorated special FBI agent.”

Now personally I do not trust ANY politician. Power corrupts. AND, I trust them even less when they play on the public’s “grimm” heartstrings. As in that last statement.

“OK…OK….I killed my wife with an axe, but, I’m really a nice guy deep down inside and the axe was kinda dull, so um, ya wanna cut me some slack here.”

Now some of you, may scream that this is, as so “grimly” put by the Congressman, “a political witch hunt” meant to force him from office.

So far no witches were found by the FBI in a search of the Congressman’s office.

Um…but there WAS that one time…….

But, “grimm” witch hunt or not, both sides, the “grimm” FBI, and Congressman Grimm, have to prove their case.

My money, if I actually had any money to bet, would be on the FBI. Only because the Congressman showed that he was really worried that he might be indited after the “grimm” details of his actions came to light. Like when he threatened to throw that reporter off of the Capitol’s balcony.

Which would be a “grimm” conclusion to an otherwise stellar past as a Marine and FBI agent.

Which just goes to show you that “grimm” things can happen to you when you read too many “Grimm Fairy Tales” and think that whatever you do, including threatening to throw a reporter off of a balcony, will end as all fairy tales end.

Former disc jockey, (Dick Jones) 30 years, and author of, "I Could Have Been Famous But Sex, Love & Life Got In The Way" available at Amazon.com books, & Kindle, "The Covert Chamber" a mystery novel available at Amazon.com and Barnes & Noble, and "Forgotten" the story of two WWI pilots who were forgotten for over 70 years available on Amazon.com and Kindle
View all posts by misfit120 →
This entry was posted in Uncategorized and tagged congress, Congressman Michael Grimm, FBI, New York, witches. Bookmark the permalink.