Another Political Scandal!!! OMFG!!! WAIT! This One Is OK…..The Guy Is Sorry.

In our dreams of course

Who am I but a mere speck of dust on my computer screen. Yes, in perspective WTF does my opinion matter to anyone, considering I can be simply sprayed with “Pledge” and wiped away. Which is what happens to us dust particles who attempt to make a point about what’s good for the goose may not necessarily be good for the gander.

Not that I’ve ever met any ganders who complained about some goose getting away with something that the gander didn’t. OH WAIT! I may have a comparison.

My apologies to any ganders who got goosed.

I’m referring  to the latest political scandal to hit the fan. That of Representative Vance McAllister, (R-LA) who has been a member of congress for less than six months and has already learned how to use his power and fame to possibly jump some woman’s bones. I say “possibly” because, so far, he only got caught on video smoozing with his district scheduler, identified as, Melissa Peacock. And THEN asking for forgiveness.

(Update: The “Kissing Scheduler” was just fired, naturally. Because, you know, her fault and all. And a reporter texted the Congressman during the media storm, and he actually replied, thinking it was someone he knew.) Update courtesy of the website “LiberalsUnite.”

Now I know what you’re all thinking. How can I get to be a Congressman and jump women’s bones.

Well you’re absolutely correct my fine feathered friends. So what makes THIS Congressman different from all the others who held a political office and suddenly became “Macho Ducks.” I’m about to tell you…….which is MY dust mite opinion. AND, if you disagree, simply chime in or ignore all this and spray me with a can of Pledge.

What makes THIS Congressman’s dilly dallying is that, (gasp) he is a Christian Conservative who campaigned on family values just a few months ago when he was running for election. YES….F-A-M-I-L-Y  V-A L-U-E-S!!!!!!!!!

WAIT! Let me get my little black book

Ya see, this is what gets me about ANYONE, not only Christian Conservatives, but anyone promoting “family values.” It’s the hypocrisy of it all. Like, the goose and the gander I mentioned above.

It’s ok for me to screw around with as many women as I want to, BUT, don’t YOU do it.

“Sooooo Senator Blowhard. What’s your speech gonna be to your constituents today?”

“Golleeee. Great speech Congressman. Is that what you do?”

Now in defense, (cough) of the Congressman, I present to you the logic of one Lamar White Jr. at “www.cenlamar.com” who wrote a piece on this very same subject stating that we should not focus on what the Congressman did, BUT, on who were the dastardly people who released that video of the Congressman with another woman. Bastards.

Oh wait, sorry, that impeachment was NOT politically motivated at all. (cough)

Which all of us average Americans value immensely

Lamar wants to know who leaked the video of the Congressman. Was the leak perfectly timed. And why did the leakers wait four months to release the video.

WHY! Because  THAT matters more that the fact that the Congressman screwed around. Just like it mattered when Clinton got a BJ that we all were not concerned that he got said BJ but WHO leaked the fact he got a BJ and why. Um….that WAS what we all cared about wasn’t it…..who leaked the story?

After all, did I care Clinton got a BJ? F**K. NO! Did it affect “MY” life drastically? NO!

What I cared about was WHO he got it from and does she do bloggers. Was Linda Tripp, who convinced Monica Lewinsky to give her the stained dress from the BJ politically motivated. Does a bear shit in the woods? 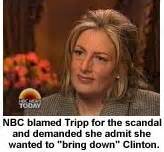 Personally, and this is “MY” opinion, I don’t care if every single member of Congress screws around. REALLY! Why….because what they do with their Johnson in their pants I could give a rats ass about. It’s their lives, if they wanna screw it up, as long as they do their damn jobs in Congress, which is what we elected them for, I don’t give a shit! Plain and simple.

My point here is that politically motivated or not, the guy is a freakin’ hypocrite for preaching “family values” to all of us while possibly sticking his Woody into places where it shouldn’t be stuck and then telling the rest of us we shouldn’t do it too.

AND….AND…..he has the huge balls to apologize by issuing this statement:

(I think I’m tearing up)

(More:) “From day one, I’ve always tried to be an honest man. I ran for Congress to make a difference and not to just be another politician. I don’t want to make a political statement on this, I would just simply like to say I’m sorry for what I’ve done. While I realize I serve the public, I would appreciate the privacy given to my children as we get through this.”

Look, you may think I’m cold, but, as touching as his apology was, the guy screwed around on his wife while preaching “family values” and NOW…..NOW….want’s forgiveness. Cripes, gimmie a damn break here! What’s wrong with this photo…um….picture?

NOPE….I for one don’t buy it. He’s attempting to save his political butt. And I don’t care if he was a Republican, Democrat, or whatever, DO NOT BE A FREAKIN’ HYPOCRITE! We’re not dummies out here in constituent land ya know.

So, in conclusion, to paraphrase that old philosopher, Mitt Romney, “Congressmen are people too.”

Which is why most of them can’t keep their Woody’s in their damn pants.

Former disc jockey, (Dick Jones) 30 years, and author of, "I Could Have Been Famous But Sex, Love & Life Got In The Way" available at Amazon.com books, & Kindle, "The Covert Chamber" a mystery novel available at Amazon.com and Barnes & Noble, and "Forgotten" the story of two WWI pilots who were forgotten for over 70 years available on Amazon.com and Kindle
View all posts by misfit120 →
This entry was posted in Uncategorized and tagged "www.liberalsunite.com", Bill Clinton, christian conservatives, congress, family values, hookers, impeachments, Linda Tripp, Mitt Romney, Monica Lewinsky, Rep. Vance McAllister, sex scandals. Bookmark the permalink.