What Do Ya Write About On A Slow News Day? Ain’t It Obvious! CATS!!!!

On a slow news day, which is usually a Sunday, when Internet trolls retreat to their caves and most politicians are at home admiring photographs of themselves with various notables, I like to take a break from writing about nonsense by writing about lesser nonsense.

So, with that in mind I visited the “vetstreet.com” site just to see if there were any cute cuddly stories about animals. After all, how can ya get in trouble writing about animals. No self-respecting Internet troll is gonna get on your case for that!

Enlarge, then copy and print for future reference

Then again, I could be mistaken. Trolls DO fall into the animal category so I might touch a nerve here. Time will tell.

Reporter Caroline Golon, (who is not from the Golan Heights, Israel & Syria) must have also had one of those slow news days as she took it upon herself to list seven things you should never say to anyone who owns a cat. Unless you have a death wish. We cat owners are lunatics ya know.

First on her list of never say to a cat owner, “I like dogs better. They’re friendlier.”

There’s a reason for this as far as I myself can determine, having lived with 3 cats for over seven years. That would be that cats have no use for you other than using you for a place to sit or as a scratching post. Dogs on the other hand depend on you to feed them.

Ya see, cats have those feeding stations you fill up with dry food that last for weeks, while dogs do not.

Well, actually dogs can have feeding stations but they’re so dumb they’d eat it all in one day. Which accounts for the fact that cats are always thin because they eat in dribs and drabs, and dogs, scarfing down everything in sight, are fat.

And, as we all know, most fat people are friendlier, so it only stands to reason that dogs would be friendlier. Otherwise they won’t get any more food to scarf down.

Which is where that old saying comes from, “Don’t bite the hand that feeds you, let the cat do it.”

Another thing you should never say. “I can tell you have cats.”

This, by pointing out to a cat owner that they have cat fur all over them. To us, it’s a sign of pride. Which is why I always wear black outfits so that I can proudly display my cat fur. And is also why Father Guido Sarducci never visits my house.

Besides, in my house, even though I sleep naked, I’m always warm when I arise in the morning with my coat of cat fur clinging to my body.

If you point out to a cat owner that you can tell they have cats by the amount of fur they are wearing, you most likely, according to Caroline, will not be welcome there. If you point that out to a big cat owner, say like someone who owns a Cougar or a Leopard, they probably will never find your body.

Never say, “You’re on your way to becoming a crazy cat lady.”

Now I myself are guilty of this. Only because 2 of our 3 cats at any given time insist on sitting with my other half constantly. So, she DOES look like a cat lady. Can’t pin that rap on me however. The third cat never sits on me and, in case you haven’t noticed, that phrase only applies to women.

Which is why some people tend to call cats “pussycats.”

(If you had to figure out the humor in that last comment, just forget it)

Recent photo of my other half……THE CAT LADY

“You should keep your cats off of the counters.”

Oh yeah…right! First of all cats do NOT listen to you unless you say two magic words. “EAT” and or “SNACK.” There is no way in hell you could ever keep a cat off of ANYTHING! Let alone counters.

Cripes, I have a cat that insists on sitting on top of the TV set. I did however manage to cure him of that by buying one of those thin TV sets. Now he sits on the toaster next to the TV which is on the kitchen counter. So, on may occasions I have furry toast. Which matches my outfit. 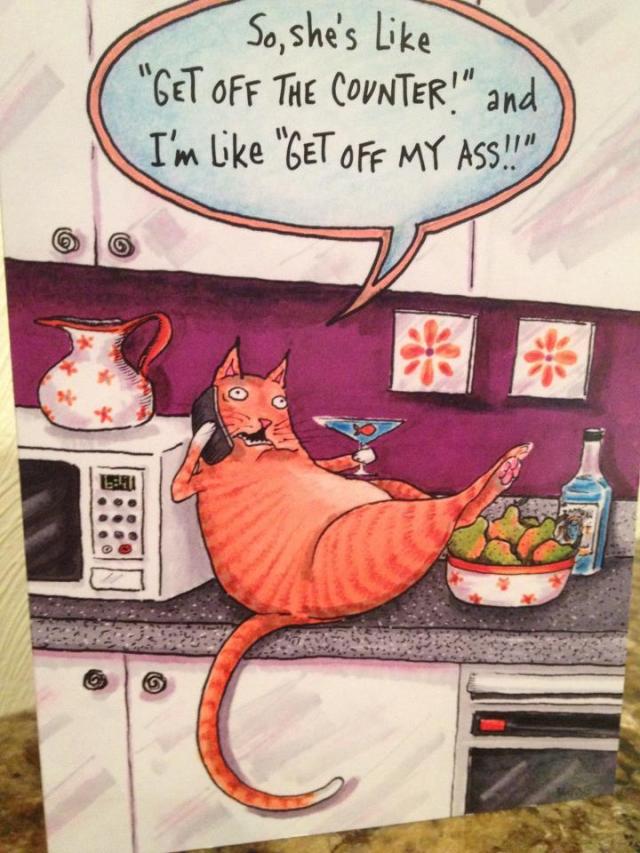 Never say, “Do cats ever do anything but lie around.”

The reason cats just lie around is, um, er…..because that’s what cats do.

HEY! You try zooming around the house chasing dust bunnies, cat toys, the laser light I have to drive them nuts, and an occasional bug. Damn, you’d be tired too. It takes a lot of effort to be a cat. Sooooo much responsibility. Eat, poop, chase tail, sleep. Enough to tucker out any cat.

Another thing you should never say to a cat owner. “I could never have a cat. I’m allergic to them.”

Ok, I can relate to that. But if you’re going to visit someone’s home who owns a cat don’t freakin’ complain. Wear a damn mask for cripes sake. Better yet, don’t bother visiting unless you just won the lottery and want to share it with us. In which case we’ll dump the cats and fly to Aruba with you.

As that famous philosopher Mitt Romney once said, “Cats are people too.”

And Caroline’s final no no. Never say to a cat owner, “What are you going to do when the baby comes.” Providing, of course, you’re expecting a baby.

You could say, “I’m going to feed the baby to the cats.” Might shut them up. Or, simply tell them to mind their own freakin’ business, that you have everything under control, and that the baby will only have to be in its own cage until age 3.

Caroline’s final message, “Think before you make comments about someone’s favorite feline family member. For those of you who have never shared a home with cats, don’t be so quick to judge what life with cats is like.”

Actually, having cats is great. Nothing like a soothing purr when you’re taking your afternoon nap. A nudge on the cheek or shoulder. Watching them play with bugs and that occasional poor bastard of a mouse. And fun games of trying to locate where they barfed in the living room. Usually when you’re eating a meal.

All that said……I leave you with this touching poem……….. 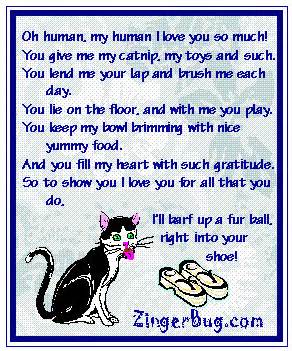 Former disc jockey, (Dick Jones) 30 years, and author of, "I Could Have Been Famous But Sex, Love & Life Got In The Way" available at Amazon.com books, & Kindle, "The Covert Chamber" a mystery novel available at Amazon.com and Barnes & Noble, and "Forgotten" the story of two WWI pilots who were forgotten for over 70 years available on Amazon.com and Kindle
View all posts by misfit120 →
This entry was posted in Uncategorized and tagged "vetstreet.com, cats, Don Novello, Father Guido Sarducci, felines, Internet trolls, pets. Bookmark the permalink.