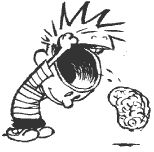 It’s not very often that something stupid doesn’t pop into my brain that immediately signals me that I should write a blog about. However, on occasion I do have those rare instances when my brain simply is empty. Absolutely nothing inside except fuzz and empty space. And cat fur.

I mean I could just simply write about “stuff.” You know, just plain stupid stuff. But for some reason there just wasn’t enough stupid stuff to make the stuff worth writing about. It’s like stupidity took a day off.

So I’m sitting here this morning thinking, what the hell I can write about that anyone would give a rats ass about. So far there’s not much I can think of.

Then I remembered watching Steven Colbert on “Comedy Central” Monday night interview astrophysicist Neil deGrasse Tyson, (no relation to Mike or those chicken people) who is the host of “Cosmos: A Spacetime Odyssey,” and the director of the Hayden Planetarium.

I was gonna write about that but I have no damn clue about anything to do with the cosmos and all that science stuff. I barely made it through science class in high school because I wasn’t into dissecting frogs. I was more into wanting to dissect hot looking Sandra Grosnick who sat in front of me.

But I did begin to wonder a bit about how the world was formed watching that interview. We all can agree or disagree on how the world came to be. A divine power or some fish type microbe that evolved into what we are today. Your choice. 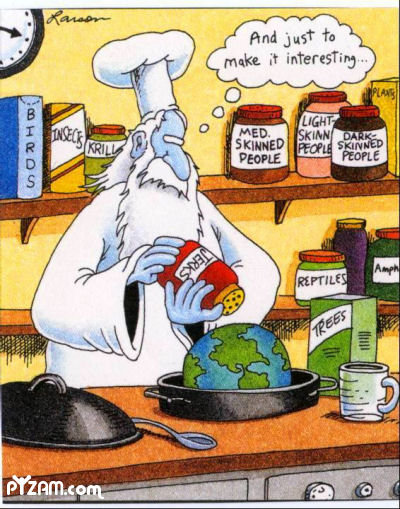 Matthew 16: God had a weird sense of humor

Then there’s religion. Did God make all of us in 7 days and then take a break and watch some reality show on God TV or something? Or did we actually evolve from something squirmy over a period of a gazillion trillion years? Again, your choice into what you believe.

Maybe he never finished putting the finishing touches on making the Earth and stuff so he sent his only son down to finish up things. Who knows?

AND, as some suggest, Jesus was married and constantly had to do errands for Mrs. Jesus so he never got to finish things either. It’s just soooo confusing.

Now I myself, growing up Catholic, obviously was taught that God created us all. Actually, if you go with comedian George Carlin’s theory, God only created 7 different people and then just made different variations of them. After all, he only had 7 days to do all this so why waste 7 days just making a trillion different looking people. Kinda like he had a “Mr. Potato Head” and just interchanged the various parts. Makes sense to me.

Then he was able to concentrate on making all that other stuff. Which obviously required much more thought than making us humans.

But what baffles me when it comes to the arguments between science and religion is the various versions of what happened when the big guy’s son came to earth and did all the things the Bible says that he did. (yes, I know, I’m opening a can of worms here, which, God may or may not have made the pattern for as well) Which was most likely one of the easier things he made considering worms are not very hard to make.

Like if there were all those Apostle guys hangin’ around Jesus day in and day out, how come each one tells a different story of what went on back then? Let’s take the Last supper for instance. Which was NOT a catered event and the food choices really weren’t that great. Some bread, wine and whatever. Maybe a fish here and there.

So they rent this hall or whatever and all sit down for this supper. You’d think the next day they’d be all kinds of comments about what went on. Like the menu, who said what? How much wine did they drink and who got soused.

And entertainment. Did ya see anyone write in the scriptures about what kind of entertainment they had? NO! Then, what did they do after eating. Play cards? Discuss Judas, who obviously nobody trusted. Or did they all simply call it a night and went home?

And who paid for that supper and all that food? Ya think at least whoever got stuck for the bill would have written something in the scriptures. 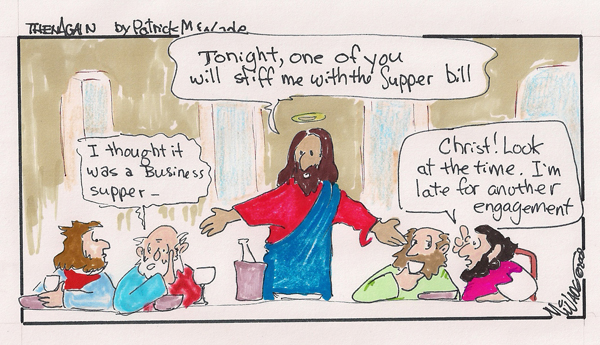 My point here is that when you read all that went on back then everyone has a slightly different version of what took place. And, as we all know, if the FBI had been around back then, and they were to interview everybody, they’d claim, “No, that’s NOT what ya saw.” Then the records would be locked up for a gazillion years with no public access.

So ya see, everybody has their view on what took place with regard to the creating of the universe and back to the time when Jesus roamed the earth. Which brings us back to the cosmos.

I, for one, cover all my bases. Not being totally 100% sure how we all got here, I figure its safer to hedge my bets. Jusssst in case both theory’s are correct. Like maybe God did create all of us BUT had some help with making things like bugs, insects, animals, Mr. Potato Head and us human animals. Which is why I always, as I’ve said on may occasions, still pray for a winning Powerball ticket.

AND……never kill any bugs or insects.

Cripes….I’m still working on what came first…the chicken or the egg.

Better to be safe than sorry when my final judgement day comes and I find out there really WAS a God and thankfully I didn’t piss him off.

Or……just in case that cosmos scientist was right and we evolved from amoebas, bugs, insects or something, and Heaven, or Hell, is run by any of them, they’ll cut me some slack for never killing a bug.

Former disc jockey, (Dick Jones) 30 years, and author of, "I Could Have Been Famous But Sex, Love & Life Got In The Way" available at Amazon.com books, & Kindle, "The Covert Chamber" a mystery novel available at Amazon.com and Barnes & Noble, and "Forgotten" the story of two WWI pilots who were forgotten for over 70 years available on Amazon.com and Kindle
View all posts by misfit120 →
This entry was posted in Uncategorized and tagged Comedy Central, Cosmos, evoloution, George Carlin, God, Joan Osborne, Neil deGrasse Tyson, Steven Colbert. Bookmark the permalink.