Don’t You Just Hate Being Claustrophobic?

Claustrophobia: The Fear of Santa Claus.

Geesh….I wish it WERE the fear of Santa Claus. However, as you all know, claustrophobia is the fear of verrry enclosed spaces. Which I for one suffer from. Although getting into a tight parking space at a grocery or department store parking lot does not affect me.

It’s those reallly enclosed spaces. Like when you get a cat scan or an MRI that totally freak me out. I think it’s because, at least for me, the fact that you’re lying on your back and being slowly eased into a very confined space and that damn tube is like 3 inches from your head. Or, it seems that way. At least to me.

So basically you have no control over what the hell is going on should you panic. Like, it’s not easy to say, “Hey, I’m freaking out and I wanna get the hell outta here NOW! Because the MRI tech has to come back into the room, push a button, slide your butt out and then attempt to calm you down. Of course by that time you’re already a basket case.

Now the reason I brought this up today is that as you are reading this I will be at the doctor’s office where they will tell me that I need a MRI. At which point I will say to them, “You give me an MRI and I’m gonna freak out pal.”

OK Mr. Misfit. We’ll slide you in there, scan your brain and see if we can find out why you’ve been having these spells of claustrophobia

How do I know this? Because I am the mother lode of freak out people when I get a cat scan or an MRI.

For instance. A few years ago I had a mild concussion and needed an MRI. Not having one before, I innocently agreed to go to Dr. Frankenstein’s office and have one done.

“Here Misfit, just lie down here, make yourself comfortable, while we give you your MRI test.”

“Oh, ok doc. So what happens next after I lie down?”

“Well, we take this hockey mask type thingy, strap in on to you face and slide your butt into this confined tube where you’ll lay there for 15 minutes while the MRI does it’s thing.”

“WAIT! You’re gonna strap a what to my face and do what?”

“Oh no problem, the mask doesn’t hurt and neither does the MRI.”

This would be me as well

Sooooo, they strap the mask on me and slip me into the MRI at which point, after 3 seconds, I begin to freak out and they have to pull me out of there kicking and screaming.

“Look you idiots….I’m claustrophobic and I’m NOT going back in there unless you drug me up with some really great stuff.” 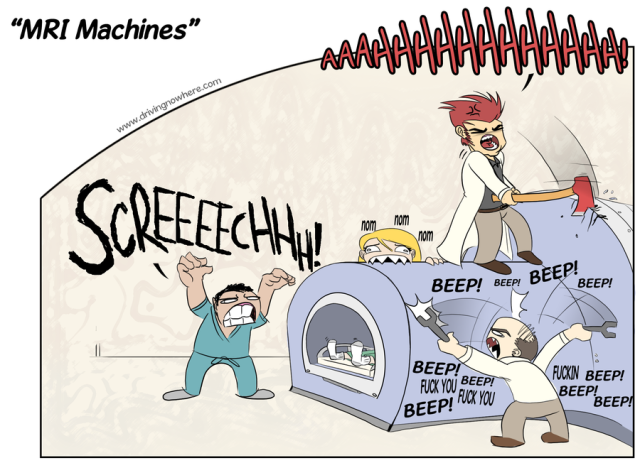 Nor could I recall the woman, (my other half) who was laughing hysterically at all that was going on. Thank Gawd for that or I probably would have killed her.

My point here is this. In today’s scientific advanced world why in the freakin’ hell can’t they develop a non claustrophobic MRI or cat scan? Yes, I know they have MRI’s that are called “stand up” MRI’s, but facilities that have them are far and in between. Like in Bangladesh or Reykjavik, Iceland. 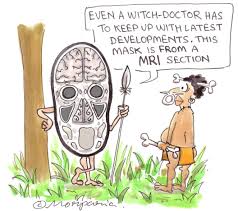 You can have non invasive surgery with laparoscopic devices. Swallow a pill that’s a camera which sends back really neat videos of your insides without any commercials, and, for the most part, get a number of body parts transplanted.

BUT…..can they invent a thing like a skull-cap MRI that you can sit in a chair wearing that’s NOT claustrophobic? NO!

Bill and Melinda Gates have offered a million dollars to anyone who can come up with a better idea for a freakin’ condom. A FREAKIN’ CONDOM for cripes sakes!

Bill….Melinda….what about a damn non claustrophobic MRI. Do ya think I give a rats ass if my Johnson is claustrophobic because it goes into a damn condom? NO!

Although if “it” had a brain, it might be claustrophobic considering where it’s eventually headed for.

Now I’m not claustrophobic to the point where I freak out in places like elevators. Unless I’m in an elevator with several other people who are in serious need of being on a weight loss program. 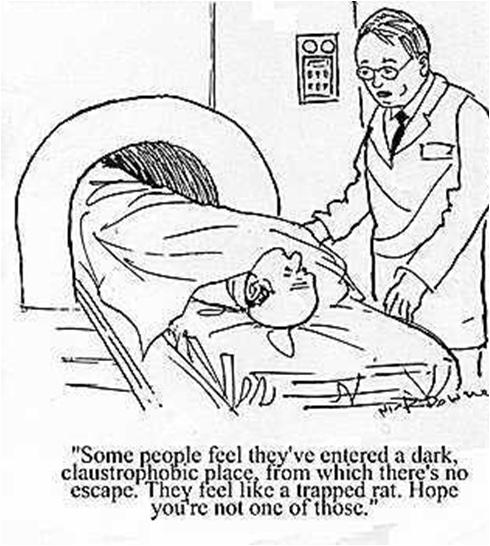 It’s just the cat scans and MRI’s. So, I have no idea how the hell doctor Strangelove and I are gonna solve this problem. Perhaps the drug route again.

And, if that is the ultimate path we will have to take, expect either no blog tomorrow, or one that makes absolutely no sense.

Which, when you consider the latter, isn’t any different that any other blog I write.

I’ll fill ya in with a short update on Thursday.

Unless the drugs still haven’t worn off.

BUT…..still as claustrophobic as an MRI……..especially if you have allergies

Former disc jockey, (Dick Jones) 30 years, and author of, "I Could Have Been Famous But Sex, Love & Life Got In The Way" available at Amazon.com books, & Kindle, "The Covert Chamber" a mystery novel available at Amazon.com and Barnes & Noble, and "Forgotten" the story of two WWI pilots who were forgotten for over 70 years available on Amazon.com and Kindle
View all posts by misfit120 →
This entry was posted in Uncategorized and tagged Bill Gates, Cat Scans, claustrophobia, doctors, MRI's. Bookmark the permalink.