It is with great honor that I present the MisfitWisdom “Flying Fickle Finger Feather Award” to yet another distinguished idiot.

Today the award is presented to “WorldNetDaily’s” Jane Chastain for being totally freaked out and ballistic about the Girl Scouts because, as she sees it, they are selling feminized, lesbian cookies.

Ms. Chastain wrote an article for the “WorldNetDaily” site entitled, “Are You Man Enough To Say “NO” To Girl Scout Cookies.”

Hmmmm. Why didn’t she address “women” in that question she posed? Like, “Are You Woman Enough To Say “NO” To Girl Scout Cookies.” WTF!

Why is it only men who have to take on the full responsibility of saying no to Girl Scout cookies. You know how weak we are when it comes to cookies. Cripes…..isn’t “Cookie Monster” a guy? What the hell does that tell ya. 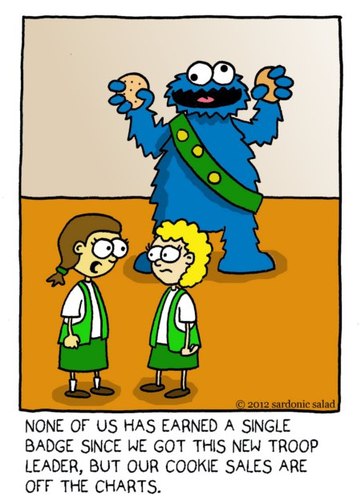 Ever since he came out of the closet

“The Girl Scouts adopted a new global agenda and began bemoaning the fact that the United States has not signed the radical U.N. feminist treaty, the Convention on the Elimination of all Forms of Discrimination Against Women, CEDAW, which would force nations to legalize abortions and prostitution. Guess a girl has to make a living.”

I wasn’t sure if she meant Girl Scouts, when they’re not selling cookies in the off-season, are turning to prostitution to make a living. But, I guess if cookie sales are down and you’re a Girl Scout over the age of say, 25 or 30, hey, what the hell. Like she said, “Guess a girl has to make a living.”

“The Girl Scouts adopted a “don’t ask, don’t tell” policy, which was as effective as the one in the military. It wasn’t long before the organization began accepting lesbian leaders and winked at lesbian activity within the ranks.”

Ya mean like an army. OMG! The Girl Scouts have an army of lesbians with all kinds of ranks selling us cookies!!!! OMFG!!! 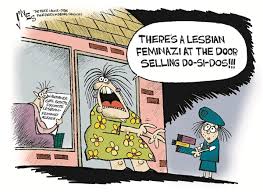 Doesn’t that fall into the “And why should I give a rats ass category as long as I get my damn Girl Scout cookies?”

I should panic if I see a Girl Scout Lt. General, or, shudder the thought, a Five Star Girl Scout General knocking on my door selling Girl Scout cookies and….(gasp) she might be a ……….(gasp) lesbian!

OMG! OMG! WTF is next. Some NFL football player coming out of the closet and announcing that he’s gay?

So Ms. Chastain has got her Peanut Butter Patties all up in a tizzy because (gasp) there may be ranks of lesbians within the Girl Scout organization. Worse yet, they could be doing strange things with Thin Mints or Do-Si-Dos.

Chastain went on to point out that in 1998, Nancy Manahan wrote the book, “On My Honor: Lesbians Reflect On Their Scouting Experience.” And she points out that in the book, “it is full of coming-of-age stories at Girl Scout Camp, and stories of lesbianism within the paid staff.”

Um, then again I’m not a Girl Scout…in a manner of speaking of course. Although when I was a lot younger I did do my fair share of girl scouting. Mostly in bars and not at a Girl Scout camp. And one attempt at selling cookies door to door.

Maybe I’m in the wrong profession here. You know, writing a blog and two books and not making a buck off of any of those things. Um does that mean I should have taken the lead from the lesbian Girl Scouts and joined the Boy scouts, Then write a book or a blog and THEN get paid for doing that?

Um…no….that won’t work either. I’m 100% straight and don’t have any cookies to sell or stories to tell or know any lesbians that could tell stories for me….unless…….unless…..I pretend to be a high-ranking Girl Scout selling cookies and telling stories about lesbians…………..under an assumed name of course.

HEY! If Ms. Chastain is all bent outta shape because there may be lesbians roaming the face of the Earth, and some (gasp) may be Girl Scouts, and it got her noticed on the Internet, I’m willing to take a shot at getting attention too.

Don’t ya just hate when that happens…..

Think I’ll start by writing an article about how I think there may be lesbians in the entertainment industry. That’ll sure get me attention on the World Wide Web.

Yeah…that’s it. Screw writing this blog for nothing. Screw writing books that no one buys. HAH!! An expose’ just like Chastain’s about lesbians in the entertainment industry. Damn! What an expose’ that’ll be.

“Hello…Seymour…..look, I got this expose’ story. Can ya get me booked on the Ellen DeGeneres show right away?”

Former disc jockey, (Dick Jones) 30 years, and author of, "I Could Have Been Famous But Sex, Love & Life Got In The Way" available at Amazon.com books, & Kindle, "The Covert Chamber" a mystery novel available at Amazon.com and Barnes & Noble, and "Forgotten" the story of two WWI pilots who were forgotten for over 70 years available on Amazon.com and Kindle
View all posts by misfit120 →
This entry was posted in Uncategorized and tagged Cookie Monster, cookies, Ellen DeGeneres, gays, Girl Scouts, lesbians. Bookmark the permalink.