Dogs. Do They Understand Us? OR…what part of “woof” do you not understand?

Ever wonder if your dog has emotions. Like missing you when you’re gone. Or perhaps thinking what a jerk you are for feeding him the same stuff day in and day out while you pig out on all other kinds of neat food.

Mark Bekoff, an emeritus at the University of Colorado, wrote an essay for “Life Science,” and answers some of the burning questions that many dog owners want to know.

Like maybe, why do dogs squat when they poop and then run around all over the place and kick up their back feet?

No, that was not one of the questions he answered, but it’s one I really wanted to know. 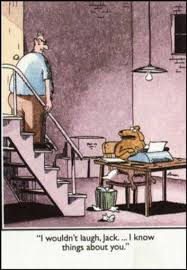 Bekoff, along with Gregory Burns, Emory University neuroeconomics professor, have some answers for those of you who own dogs. Burns also wrote an essay entitled, “Dogs Are People Too.” He most likely came up with that essay title after hearing Mitt Romney say, “Corporations Are Dogs Too.” Oh….sorry, that’s incorrect. Romney actually said, “Corporations Are People Too.” But, when ya think about it, both are not really far off the mark. Well, the dog one.

One toilet water on the rocks please

So I looked at some of the questions posed regarding their research and here’s a few:

“What have you discovered?”

“Dogs’ brains, in many ways, look and function just like human brains. We share many of the same basic structures (called a “homology”) including a brain region that is associated with positive emotions. We are also beginning to understand how the dog’s powerful sense of smell works to identify the members of his household.”

Which to me is fantastic. Dog brains are similar to ours. Which may explain the answer to my earlier question about dogs pooping and then kicking up their back feet. Kinda like humans do in the bathroom, except we don’t kick our feet, but, do feel a sense of satisfaction, and, if we could kick our feet without injuring ourselves, most likely would. 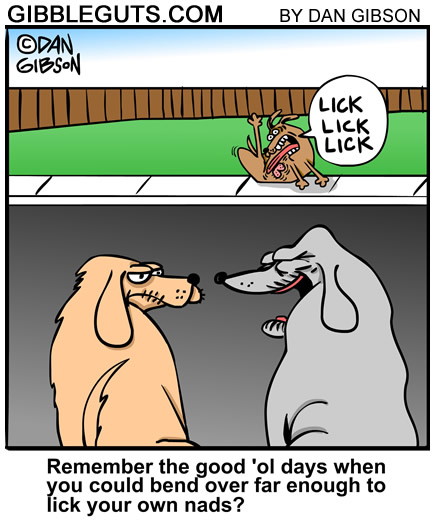 Furthermore in their essays:

“We can no longer hide from the scientific evidence. All in all, dogs and humans show striking similarities in the activity of an important brain region called the caudate nucleus. So, do dogs love us and miss us when we’re gone? The data strongly suggest they do. And, those data can further move humanity away from simplistic, reductionist, behaviorist explanations of animal behavior and animal emotions and also be used to protect dogs and other animals from being abused. Right now, animals are legally considered to be property, just like a backpack or bicycle.”

So basically what this means is that dogs have brains that are similar to ours. Which means if you’ve ever felt the least bit uncomfortable getting undressed in front of a dog because you felt they like to see you naked, you were probably right.

So how did they determine the behavior of dogs. Besides watching them smell other dogs butts. Simple, they used an MRI to study them.

Where “dog breath” comes from

Professor Berns goes on to state: “But now, by using the MRI to push away the limitations of behaviorism, we can no longer hide from the evidence. Dogs, and probably many other animals, especially our closest primate relatives, seem to have emotions just like us. And this means we must reconsider their treatment as property. . . . Perhaps someday we may see a case arguing for a dog’s rights based on brain-imaging findings. I’m sure society will as these data greatly expand what people know about the minds of other animals.”

Which means that eventually dogs, as I see it, will be able to haul your sorry ass off to court and sue you for such things as making them wear collars, giving them stupid names, taking them to the vet and having their balls cut off, (very embarrassing to dogs) and the most degrading thing of all, for all dogs, having to go outside and poop in the dead of winter while you’re sitting inside pooping in a nice warm bathroom…and YOU have toilet paper. How freakin’ degrading to a dog’s self-respect is THAT!

And finally from that essay:  “Another important question needs to be addressed: Are the emotional lives of other animals exactly the same as those of humans? Scientists really don’t know, and that isn’t an important issue: Different people experience joy and grief differently, for example, but we don’t say that if those emotions differ then one person feels something and the other doesn’t. Do dogs love us and miss us when we’re not around? As a dog lover, it’s easy to answer those questions with a resounding and unquestionable “Yes!” But, what do the data say?”

Are the emotional lives of animals exactly the same as humans? WTF!

Of course they are.

Why do ya think they have dog and cat psychologists. And tranquilizers for dogs and cats. Because they get upset like we humans do for cripes sake. Do ya think dogs chase cars for the fun of it? Of course not. They chase cars to vent like we humans do. Only because they can’t pound their paws into a wall like we can when we’re mad. Doesn’t take a rocket scientist to figure THAT out! 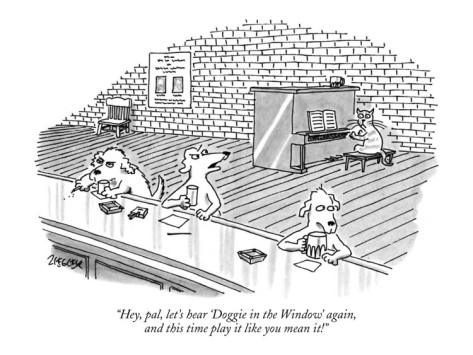 However, dogs and cats CAN communicate with each other

And cats, geez……why do ya think they claw on your sofa? Because they wanna sharpen their nails? Nope. Stress! Yes…cats get stressed and when they get stressed they either bite their nails or if they’re pissed off at you, claw your sofa. 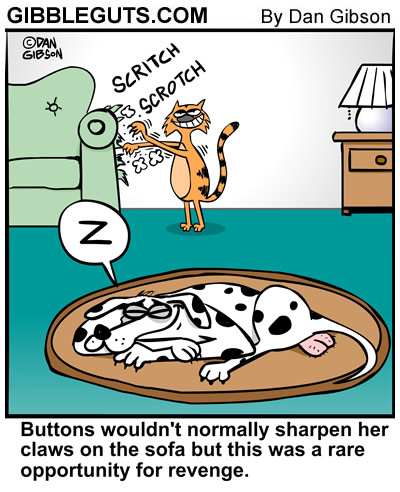 Or pissed off at the dog

Considering that dogs and cats, for the most part, all get along with each other…………….

And we, as humans can’t.

Meow and woof, which in cat and dog language means……………..

(FYI) Bekoff’s most recent Op-Ed was “Is it Ever Right to Hang a Husky?” This article was adapted from “Dogs Are People, Too: They Love Us and Miss Us fMRI’s Say” in Psychology Today. More of the author’s essays are available in “Why Dogs Hump and Bees Get Depressed.” The views expressed are those of the author and do not necessarily reflect the views of the publisher. This version of the article was originally published on LiveScience.

Former disc jockey, (Dick Jones) 30 years, and author of, "I Could Have Been Famous But Sex, Love & Life Got In The Way" available at Amazon.com books, & Kindle, "The Covert Chamber" a mystery novel available at Amazon.com and Barnes & Noble, and "Forgotten" the story of two WWI pilots who were forgotten for over 70 years available on Amazon.com and Kindle
View all posts by misfit120 →
This entry was posted in Uncategorized and tagged "Life Science, cats, Dogs, Patti Page, University of Colorado. Bookmark the permalink.