Psssst……Ya Wanna By A 1959 Chevy Bel Air…only 9 miles on the odometer. 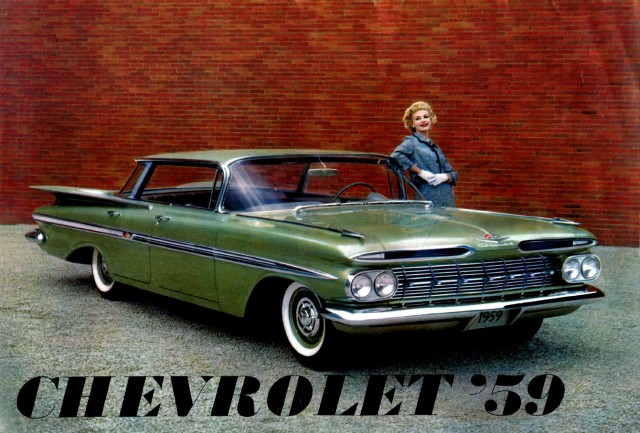 Sandra Hoppenferger back in 1959 with some hot dudes Chevy

The Chevy in question is NEW when ya think about it. Because it DOES only have 9 miles on the odometer and that’s it!

How can this be you say?

Well here’s how. Along with a 1960 Corvair Monza and 500 other vintage cars that for the most part, other than a few miles, have never been driven that have been stored in various places in Pierce, Nebraska. Where ya gonna find a deal like this?  Other than going to Cuba where vintage cars are still running but have mucho miles on them.

In Pierce, Nebraska it’s been seventeen years since car dealer Ray Lambrecht closed his Chevrolet dealership. But, according to this story by the AP, he had a big secret. Which was that he had stashed cars all over the place that didn’t sell right away.

This guy stashed these cars in warehouses, at his farm and at other places around the town he worked in for 50 years. Like how about a rare Chevy Cameo pickup which might bring in a six figure bid when this treasure trove of cars goes up for auction next month.

(I see Cubans standing in line to get visas to the U.S. to replenish their inventory of classic vintage cars) 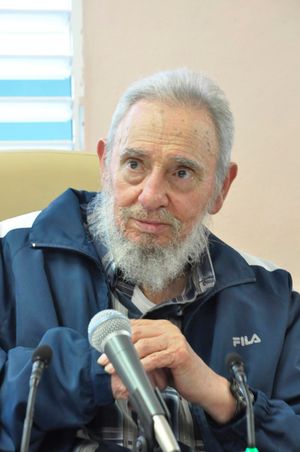 As sure as my name is Fidel, I’ll make you a car deal you can’t refuse

OMG! Just to be able to tool around town again with the radio blasting from my vintage 1963 Chevy Impala.

Ya see, I couldn’t afford a 1963 Chevy Impala back in 1963 so that I could tool around town and impress the babes. Now’s my chance to do just that.

Yeah, I remember cute steamy hot looking Sandra Hoppenferger and that enticing pointy bra she used to wear with that white pull over sweater. Damn! She never even gave me a look when I’d drive by blasting, “I Wonder Why” by Dion and the Belmonts in my 1949 De Soto.

Come to think of it, no hot babe would even glance at me when I drove by in my De Soto. Go figure.

But…it might have been because all those other cool guys had Chevys, and souped up Fords and Corvettes. Ya think?

Somehow, hearing “Runaway” by Del Shannon coming from a hot looking Chevy, Ford or Corvette might be more impressive to a babe then coming from a four door 1949 De Soto.

OH YEAH!  Well wait till I bid on one of those vintage cars. First thing I’m doing is finding a really good oldies station, (those cars did not have cassette or CD players) and waiting till a hot song comes on, say like, “Fun Fun Fun” by The Beach Boys, and then drive by Sandra Hoppenferger’s house and I’ll bet she’ll really be impressed then.

Providing of course that Sandra can actually hear me drive by her house with the Beach Boys blasting considering that now she’s in her 70’s, might be wearing a hearing aid, OR…..is in an assisted living facility where they don’t allow loud radios blasting.

Hmmmm. Maybe it’s not a good idea to go out to Nebraska after all.

But. If you’re crazy enough, and have a lot of money of course, to want to bid on any of these cars, you can do an Internet search on this story or track down the former car dealers daughter, Jeannie Stillwell, and get the details on the auction. Which I believe can also be accessed on-line for bidding.

A few of the classic vehicles do have some minor damage to them. They were stored in a warehouse until a heavy snow collapsed the roof and some of the cars sustained damage. They were then moved to another location but are all still well-preserved. 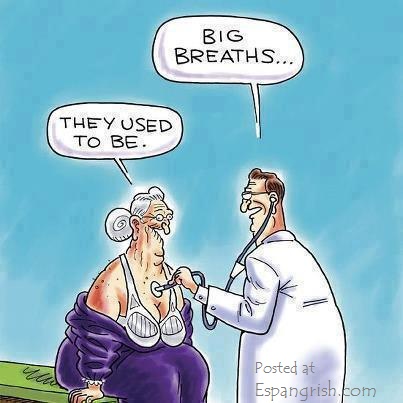 So, if ya have a lot of bucks just lying around and you’re into vintage cars with low mileage, and possibly have “Sandra Hoppenferger” envy, ya might wanna check into this auction.

(NOTE) Sandra Hoppenferger. If you’re by chance reading this blog, forget about me buying one of those vintage cars and tooling by your assisted living facility. You had your chance back in 1963 when I had my hot De Soto. And besides, your pointy boobs and pull over sweaters don’t do it for me anymore.

Former disc jockey, (Dick Jones) 30 years, and author of, "I Could Have Been Famous But Sex, Love & Life Got In The Way" available at Amazon.com books, & Kindle, "The Covert Chamber" a mystery novel available at Amazon.com and Barnes & Noble, and "Forgotten" the story of two WWI pilots who were forgotten for over 70 years available on Amazon.com and Kindle
View all posts by misfit120 →
This entry was posted in Uncategorized and tagged Beach Boys, Chevy's, classic cars, Corvettes, Cuba, De Soto, Del Shannon, Dion and the Belmonts, Everly Brothers, Fidel Castro, Fords, Grateful Dead, Nebraska, vintage cars. Bookmark the permalink.