You all know I just love freaking you out with giant mega man-eating creatures that I come across in the news. It’s just one of my favorite things to do.

So, that said, today’s giant freakin’ mega thingy that’s gonna make your life even more miserable than it already is, assuming that your life is already miserable, is a giant mega mosquito.

(I might add that this article from “click.orlando,” who ever the hell they are, spelled mosquito differently than I’m spelling it. Opting to spell it “mosquitoe.” But, considering that some people spell potato “potatoe,” I say, who gives a rats ass)

Except for Dan Quayle perhaps. Whose name I choose to spell, “Quail.” 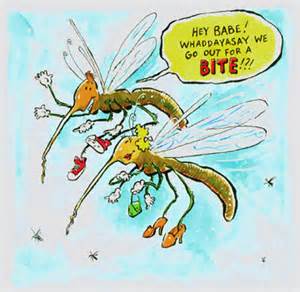 Anyhow, this giant mega mosquito is about the size of a quarter and is expected to invade Florida sometime this year according to entomologists. Which, according to my Funk & Wagnells dictionary of words that nobody could care less about, means, “the branch of zoology that treats insects.”

Treats insects for what I haven’t a clue. Unless insects get sick too and need medical attention. Who knows?

Kelly Deutsch, which is also a German word but has nothing to do with this story, is the director of “Seminole County Mosquito Control,” which I assume keeps mosquitos under control lest they band together and riot or something, says that recent rains, including the dousing from Tropical Storm Andrea earlier this week, will likely cause a spike in all mosquitos.

Or….bite that guy over there drinking Jack Daniels

Yet another one of those strange word people, entomologist Phil Kaufman, said the super-sized species is, “notoriously aggressive” and the best way to protect yourself against them is to carry a machine gun or an Israeli Uzi or perhaps a few hand grenades.

Um…no, that’s not what he suggested, but that’s sure as hell what I’d do considering the size of these suckers. He actually suggested that you carry bug spray such as “Deet” and cover up as best as possible.

The technical name for these mosquitos is, “gallinippers.” Which sounds kinda Italian to me.

“Hey Giovanni, I’d like ya to meet my new friend here, Antonio Gallinipper.”

“Oh hey, nice ta meet ya Antonio….so, whaddya do for a living.”

“Well, yer not gonna believe this, but I raise mega mosquitos and named them after myself.”

“Really! Geez, what the hell do ya do with them anyhow?”

“Well, you know all those crime shows on TV that have a lot of gory blood and gore scenes.”

“Well I’m the guy who supplys them with all that blood that my little mega mosquito friends collect.”

“Sooooo. ya wanna make a donation?” 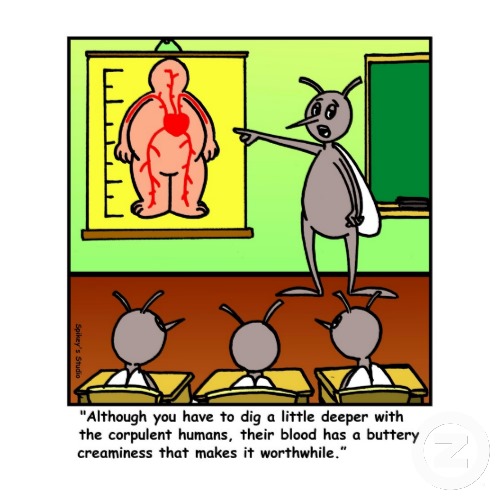 Tasty with a tint of butter flavoring

The good news according to Kaufman, is that these mega mosquitos aren’t known to carry any viruses that could be harmful to humans.

The bad news is that because they’re so big they may make giant holes in your skin and if you attempt to drink any liquids after getting bitten you’ll spurt water outta your skin all over the place.

Not really, but it’s something to consider folks.

Officials in another Florida county, (Volusia) have warned residents of a mosquito invasion after Andrea soaked the region. They have advised homeowners to get rid of standing water, in deference to sitting water, in their yards to help keep the population under control. Um, the mosquito population and not the people population.

Although, if you tend to have standing or sitting water on your property on a really hot Florida day it will attract people wanting to cool themselves off. Then, before ya know it they’re knocking on your door asking if they can borrow a few hot dogs and hamburgers to cook on your grill.

So, it’s best not to have any water around anywhere, standing or sitting.

Also, try not to antagonize any of these mosquitos

Now, considering the size of these insects are about the size of a quarter, I’m quite sure you would be able to spot them coming from a good distance. And, a mosquito that size surely must make some sort of flapping wing noise to boot. As well as that annoying mosquito sound when they’re dive bombing towards you. So, that should give you fair warning.

However, if by chance you do not hear that buzzing or wing flapping sound and whip out your Uzi or hand grenade to do in the little suckers, be very careful.

As we all know the United States Government has been using drones to spy on people and they could easily be mistaken for one of these mega mosquitos.

And if by mistake you think it’s one of those mega mosquitos and do battle with it and it turns out to be one of those government drones, and you take it down, boy are you gonna be screwed.

Because the government is gonna bill you for destruction of government property to the tune of a gazillion million dollars.

AND….they ain’t gonna buy your excuse that you thought it was a freakin’ mosquito.

Former disc jockey, (Dick Jones) 30 years, and author of, "I Could Have Been Famous But Sex, Love & Life Got In The Way" available at Amazon.com books, & Kindle, "The Covert Chamber" a mystery novel available at Amazon.com and Barnes & Noble, and "Forgotten" the story of two WWI pilots who were forgotten for over 70 years available on Amazon.com and Kindle
View all posts by misfit120 →
This entry was posted in Uncategorized and tagged "Deet, Dan Quayle, entomology, Florida, Guantanamo Bay Cuba, insects, Jack Daniels, Seminole, seniors, The Geen Mosquito-Tune Rockers, Uzi. Bookmark the permalink.