Reflections On Being Old: (um not that “I’M” old mind you)

I was in a long distance conversation the other day with a close friend of mine who lives in the land of OZ (Australia) whose name I shall not mention, (Charlie) and during that conversation a discussion about old people arose.

Might have been that fact that I’m old. My guess anyhow. Along with the fact that Charlie is very inquisitive and missed her opportunity to be a private detective. And should have changed her last name to “Chan.” If ya catch my drift here.

Somehow that old people subject arose and I was compelled to inform her that not all old people are old. Yes, some old people ARE old and, and some older than dirt itself, and then there’s Larry King, but I’m NOT one of them.

I freely admit to being in the “old” category, but refuse to be classified as “elderly.”

As in, “ELDERLY DRIVER MOWS DOWN SEVERAL HUNDRED BYSTANDERS AT A JUSTIN BIEBER CONCERT WHEN HE CAN’T FIND THE BRAKE PEDAL”

Of course we all know THAT particular headline will never happen because any elderly person with at least half a brain is NEVER gonna go anywhere near a Justin Freakin’ Beiber concert. So relax folks, you’re all safe. 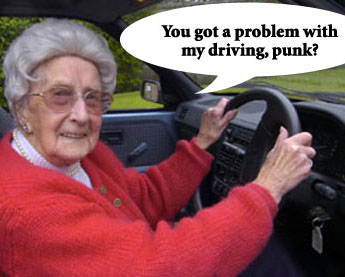 Hey….back off lady or I’ll put a knot in your damn pantyhose!”

So how you actually categorize a person as “elderly” is beyond me. I mean, would you classify anyone who follows “Honey freakin’ Boo Boo” and her dysfunctional family on TV as being “insane?’  Actually, anyone who follows that program, as far as I’m concerned, IS insane. Or, doesn’t have a freakin’ life.

But my point is the use of the word, “elderly.” WTF is elderly? And at what age do ya become one of those elderly people anyhow?

Is there like a criteria for being classified as elderly? Like drooling, driving a scooter, sucking in air from an oxygen tank while smoking a cigarette. Or standing in a line in a store and yelling out, “Gimme my damn senior discount you SOB.”

AND….actually, the word “senior” should be deleted from that line. Only because I’m a senior and have never used that line in a store. BUT….when it comes to “elderly” which in my mind IS old, a nationwide law should be enacted that states that you should have to be 85 and older to qualify as being elderly. Um, maybe even older, like 85 to 100.

Or when this freaks you out…..

Now I do not consider myself to be ancient. Yeah, I’m over 70 but, (stop your gasping you idiots) I still have the brains, stamina and intellect that I had when I was a lot younger. I’ll even bet I could even outrun any of you younger mother******s, (50 on up) in a race.  Providing of course that the race was not longer than 2 minutes. Hey….why push it!

I don’t need a walker, cane, scooter, oxygen tank, wheelchair, or a pulley system to get out of bed in the morning either. Although once in a while a muscle freezes up on me, but I don’t worry about it because of my age because I know that sometimes you suffer from those four-hour muscle things after taking…um….neverrrrrrrr mind.

I know what you’re thinking…… but no, I do not take Viagra or Cialis and do not have a reptile dysfunction problem. Which is another reason I should not be declared elderly.

And, getting back to that “elderly” classification, that seems to be a key word when news reports cite an accident or a missing person….WTF!  Is it ONLY elderly people who get freakin’ lost in the woods or something? Or, as I said earlier, an elderly person who rams into a storefront with his car.

How come it’s never, “YOUNG PERSON RAMS INTO A STORE FRONT WITH HIS CAR.”

Or….”MIDDLE AGED PERSON PLOWS INTO A TOMATO TRUCK. BLOOD, OR TOMATO SAUCE, NOT SURE, EVERYWHERE!”

So my complaint is the stigma associated with the word, “elderly.”

I mean, look at me! Do “I” look freakin’ elderly to you? (photo below)

Um, sorry, it’s the only photo of myself that I could find that doesn’t make me appear to be elderly.

Old and being “elderly” is a state of mind. With the exception of those individuals who are actually “elderly” and show their elder status by drooling all over themselves and, yes, plowing into a building somewhere because they can’t find the damn brake pedal.

Or when this happens……..

Oh yeah, and that one #$*^%$#!! old lady who claimed that the slot machine I was going to sit down at was “hers” because she “thought” about playing it while she was on the other side of the casino. NOW THAT’S ELDERLY!

Now, in conclusion, a word to you younger folk. Pay attention here. This is verrrrry important.

Guess what kiddies. Your parents do…..(gasp)…..still have red-hot out of this world mind blowing your sox off sex! YES….it’s true I tell ya….TRUE!

So, if you happen to think that being old sucks, guess what, if you’re elderly….quite elderly, and ya can’t get it up….yes it sucks. BUT….if you’re just old because your age says that you’re old, but your doo dad and foo foo are in A-1 off the lot condition……..IT’S GREAT!

Trust me on this one folks. If you’re old, or on the verge of approaching old, as defined by idiots who think 50 is old, it isn’t.

Former disc jockey, (Dick Jones) 30 years, and author of, "I Could Have Been Famous But Sex, Love & Life Got In The Way" available at Amazon.com books, & Kindle, "The Covert Chamber" a mystery novel available at Amazon.com and Barnes & Noble, and "Forgotten" the story of two WWI pilots who were forgotten for over 70 years available on Amazon.com and Kindle
View all posts by misfit120 →
This entry was posted in Uncategorized and tagged AARP, Australia, Charlie Chan, Cialis, Honey Boo Boo, Justin Bieber, Larry King, old people, seniors, sex, Viagra, Village People. Bookmark the permalink.

4 Responses to Reflections On Being Old: (um not that “I’M” old mind you)