TONIGHT…Live on stage. Performing, “If I Only had A Brain,” from that great movie, “The Wizard of Oz,”…Saraaaaaaah Palinnnnn!!!!  Yeaaaaa…..

I’m not arguing the point that Ms. Palin doesn’t have the right to say what she thinks. Just as the 2nd amendment guarantees the right for every American citizen to arm bears, we also have the right to freedom of speech. As does Sarah.

As sanctioned by the NRA

But for cripes sake Sarah, if you’re gonna say something, first get your facts together before you open your mouth and insert one of your designer shoes into your mouth.

The one thing about making a comment criticizing someone is that you can really make a solid point using facts, which usually get in the way, which, in Sarah’s case, facts are unimportant, so any point she’s attempting to make really has no point at all. Other than to make her appear as a stupid ass. Which is “my” point.

Geez….and all this time I thought God was an Independent

So, what was the point Sarah was attempting to make?

Beats the livin’ crap outta me. Other than perhaps she just needed to get her name in the news once again. Which she accomplished. Which….may have been the point. I think. Otherwise there is no point.

So Sarah went to the blogosphere using Twitter and Facebook to twit, (my term) using her face, to criticize the annual White House Correspondents Dinner this past week.  She obviously was upset about one thing or another, mainly, according to her posts, that, “While America is buried in taxes and a fight for our rights, (I guess to arm bears with AK47’s) the permanent political class in DC dresses up and has a prom to make fun of themselves. No need for that. We get the real joke.”

I might add that Sarah was not invited to that dinner so perhaps that might have riled her a bit. I’m sure she could have told a lot of funny one liners if allowed to speak. Like,”Why did a governor of a big state resign rather than finish out her term.”

Answer: “Because I didn’t feel like helping my constituents who were buried in taxes and fighting for their rights in Alaska.” That, and there’s more money to be made out there in those hills than here in Alaska.

She also went on to tweet: “That #WHCD, (White House Correspondents Dinner) was pathetic. The rest of America is out there working our asses off while these D.C. assclowns throw themselves a #nerdprom.”

Sarah explains, in her own words, the definition of “gobbledygook.”

Hmmmm. Soooooo, where is it that Sarah is actually working her ass off like the rest of us?

WAIT!  Did she get a job somewhere that I’m not aware of?  OMG!

Then again, why would Sarah even have to worry about working? She’s earned millions, as in “dollars,” putting her name on books, giving her useless opinions on TV, starring in a TV reality show, giving speeches and perhaps hitting Bristol, her daughter, up for a few mil when she runs low on cash.

Hmmm….how about posing for Playboy Magazine then

BUT….remember folks….she’s just like the rest of us. Which is why she could relate to all of us by saying, “The rest of America was out there working their asses off while the President and a bunch of correspondents were having dinner.”

Here’s a small fact for those of you who think I’m being a bit hard on Sarah. I know, I hate to confuse all of you Palin lovers with facts, but, WTF, I decided to go for it anyway just to piss all of you off.

The White House Correspondents Dinner has been an annual event since 1920. The first President to attend was Calvin Coolidge in 1924. Most Presidents and Vice presidents have attended the event over the years with only a few exceptions for various reasons. So basically any President in office since 1920 could obviously attend the WHCD. Which seems logical that they would attend, considering it was called the “White House Correspondents Dinner” and, I’m assuming, if it was called that, then, and again I’m assuming, the President would be invited. My guess anyhow.

So, with that in mind, do your research and find out just how many presidents attended that event since 1920. After you do that, come back and tell me that Sarah was blowing smoke out of her Alaskan ass. Which, if I had an opportunity to see, would do so in a heartbeat. Might roast some marshmallows while I’m at it. 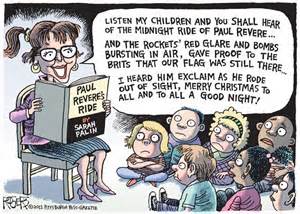 Geez….that damn Paul revere guy was sure talented. But, she did leave out how he started the New Year’s  Eve tradition of dropping that giant ball from the Old North Church

But, even if you present these facts to people who adore Palin, they will still buy into her theory that, as she says, “The rest of America is working their asses off while they throw themselves a #nerd prom.”

Because…..now pay attention here. This is verrrrry important. You might wanna write it down for future reference.

Go ahead. All you naysayers who doubt that those are the main reasons and are stomping your feet and crying “FOUL.”  Ya see, nobody has the freakin’ balls to say what I just said.

Yes I did. Wake up for cripes sake. If this incident doesn’t prove that there’s a constant discrimination effort going on against the President with a tinge of racism a part of it, then WTF does?

Look. If you think I’m nutso, good. I never claimed I was sane ya know. But I see what I see, and Palin has demonstrated that I’m seeing way too much stupid stuff coming out of people’s mouths two, three, four, five and six fold. Especially her tweet and FB posts.

Now THIS I agree with. I’ve ALWAYS felt Sweden was a threat. Strictly based on the brainwashing they gave us with ABBA music

Maybe….just maybe…..I grew up in a long gone distant society where there was respect for the Office of the Presidency regardless which party he was affiliated with. The problem, as I see it today, is that far too many nincompoops have access to the various social media outlets available to anyone who has a computer and can type. Brains are optional. As displayed by some of the comments on social media sites.

Yes, you can label ol Misfit here as a nincompoop because I may or may not fall into that category. Yet even though I’ll take ANY President over the coals, I do it with humor and NOT disrespect by name calling and slurs. That’s the difference. Oh yeah…..and facts that I research from a multitude of credible sources. INCLUDING Faux News just to get their perspective.

Oh, by the way……..I, as many critics are on the Internet, am NOT anonymous.  If I’m gonna make a point, good or bad, my names all over the place. I’m NOT gonna hide behind anonymity.

Look, if ya wanna criticize Obama, be my guest. But for cripes sake do it with factual information. Otherwise you look like a freakin’ idiot. I’d be the first one out of my padded cell to applaud you if you made a good point with facts against ANY politician.

WHY? Because I absolutely detest most politicians. If I had the choice of being locked in a cell with a politician or a snake….I’d choose the snake. Only because I know at some point I’d get a really big hug with no strings attached.

So, in conclusion. You can buy into what Sarah got all bent outta shape about.  Why, because you love her. Or, admit you have an actual brain and take it all with a grain of salt.

Unlike Palin, who obviously wrote those comments while most likely smoking a grain, gram, or ounce of some really potent Alaskan marijuana. 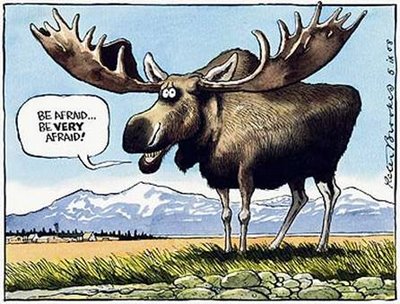 Former disc jockey, (Dick Jones) 30 years, and author of, "I Could Have Been Famous But Sex, Love & Life Got In The Way" available at Amazon.com books, & Kindle, "The Covert Chamber" a mystery novel available at Amazon.com and Barnes & Noble, and "Forgotten" the story of two WWI pilots who were forgotten for over 70 years available on Amazon.com and Kindle
View all posts by misfit120 →
This entry was posted in Uncategorized and tagged ABBA, Alaska, emilyinnc, Fox News, marijuana, NRA, President Obama, racism, Sarah Palin, The Wizard Of Oz, White House Correspondents Dinner. Bookmark the permalink.