Montana Ok’s Scarfing Up Road Kill. YES! What We’ve All Been Waiting For. 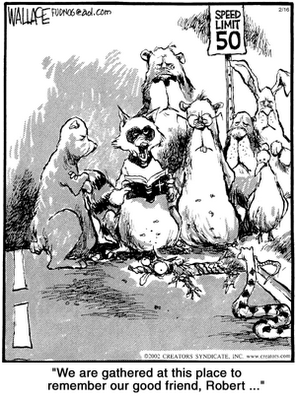 A moment of silence for the dearly departed please

In Montana, (not Hannah) Representative Steve Lavin, (R) apparently had nothing to do. So in a brilliant moment of sheer inspiration decided to introduce legislation that would allow anyone to salvage road kill for meat when it is salvageable. I guess by “salvageable” it means if the animal is dead, worth salvaging and you don’t have to draw your gun in a standoff just in case it’s wounded and puts up a fight.

Is there like not a lot of grocery stores and fast food restaurants in Montana?

The new law which was voted on by the House passed 19-2. Obviously two legislators must go out-of-state to get their food or are vegetarians. (road kill vegetables for the taking are presently allowed in Montana)

Lavin went on to say, “As people know, people hit a lot of animals, (in self-defense of course) on roadways, and I mean a lot of them.”

So this may have prompted him to introduce that legislation because the “House, Fish, Wildlife and Parks Commission” thought it was a great idea. Considering, I guess, that a lot of houses, fish, wildlife, and parks wind up as road kill. And when that happens the state highway patrol has to respond to the scene of the crime….or road kill.

Soon to be featured on an episode of CSI Montana

So, I assume most of those highway patrol officers welcomed that bill mainly because they’re tired of scraping dead road kill off of the highways usually around dinner time, which really puts a damper on a really great dinner.

“Lt. Ya want me to scoop up that dead cow over there on Highway 101, throw it in the cruiser and haul it off to Harry’s butcher shop?”

“Nah. I’ve already got two possums, a pig, one sheep, a squirrel and one drunk in the trunk. Enough food to last me till next week.”

“Geez Lt. You got a drunk in your trunk? Whaddya gonna do with him?”

“HAH!  Simple…..throw him back out in the road to attract more road kill.” 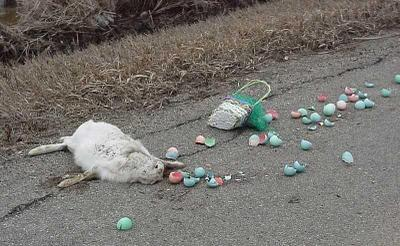 Sorry kids..um…I have some really bad news about Easter….

In many cases, the animals are wounded, (shoot outs among animals) but they still must be put down. It is in those cases that Lavin has occasionally been asked if the animal can be salvaged. “I have to tell them “no” because of the current state law. There’s a lot of good meat being wasted out there.”

And you thought I was kidding about possum, squirrel and skunk meat.

Perhaps there aren’t a lot of fast food restaurants in Montana either.

Lavin said that the Highway Patrol often calls food banks that do take road kill, even though that is a technical violation of the law, but that food banks often can’t drive considerable distances to pick up an animal in timely fashion.

“Usually when we call them they are not available or they aren’t logistically able to come out and get it,” he said.

“Hello. Montana food bank…how may I help you?”

“Oh hi. This is the State Highway Patrol and we were just wonderin’ if you’d like to come out to Highway 101 and pick up a dead aardvark. The little creature looks like he just finished a substantial meal of ants so it might be worth throwing in a pot along with some carrots and potatoes for tonight pot luck supper.”

(NOTE) Never, if travelling through Montana stop at a local food bank for a handout. 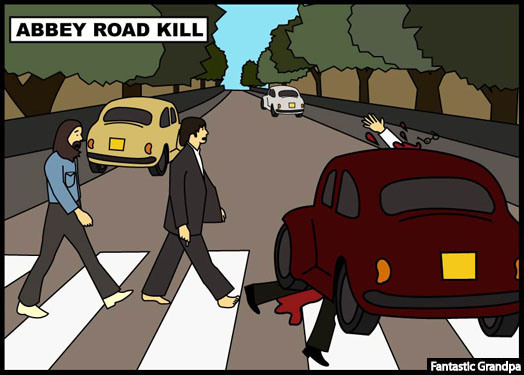 Another point Lavin made was that people aren’t going to intentionally hit an elk when it’s going to cost them $1,500 in damages to their vehicle. Nor are poachers going to go through problems of staging a road kill with the possibility of being caught.

Hmmm. How exactly do you stage a road kill?

Like perhaps luring an unsuspecting elk out into the road, carrying on a conversation with said elk, and then telling the elk to wait a second while you go back to your car for a cigarette, and then, when the elk is not paying attention, rev your car engine and aim for the sucker before he knows what the hell is going on. Thus……staging a road kill.

Totally unethical and unfair to the elk as well.

I suppose if it involves road kill fish. Otherwise poachers might be pretty safe. My guess anyhow.

Um…better call them and cancel the dinner invite

Lavin said that he doubts salvage permitting will become a widespread practice, simply because most people aren’t interested in road kill. But some are interested in game meat that is perfectly fine.

Why is it the thought of the movie “Deliverance” suddenly comes to my mind? 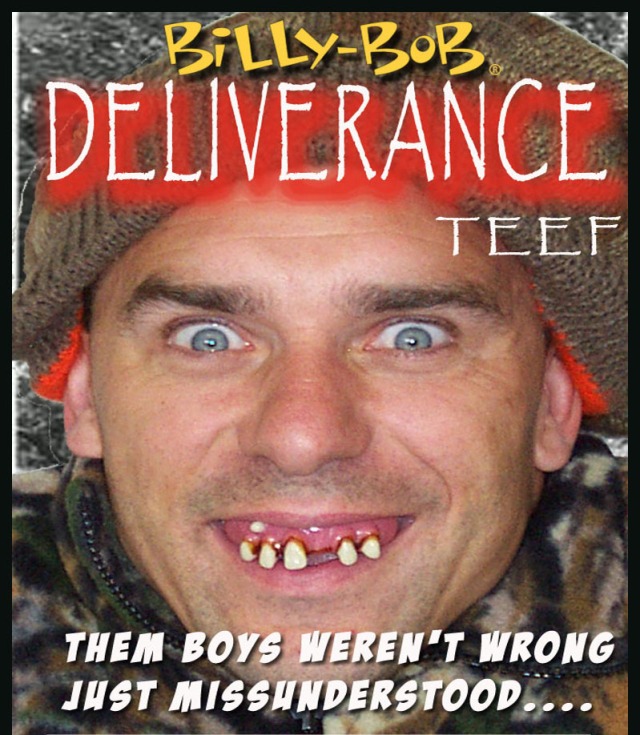 Hey maw….git out the fryin’ pan, we got us a biggin one…

“OK Festus….yew tie him up to that tree over thar and I’ll shoot the hell outta him.”

“Ah damn! Yer right Festus. Ok…let’s just bop him on the head, and then throw him in front of the next semi that comes along. We’ll make it look like road kill and with that new law that’s out there, we can salvage him afterwards.”

Yesiree folks. Them grills we be a cookin’ some mighty fine road kill meals out there in Montana. And you’ll know it’s really fresh………….

Former disc jockey, (Dick Jones) 30 years, and author of, "I Could Have Been Famous But Sex, Love & Life Got In The Way" available at Amazon.com books, & Kindle, "The Covert Chamber" a mystery novel available at Amazon.com and Barnes & Noble, and "Forgotten" the story of two WWI pilots who were forgotten for over 70 years available on Amazon.com and Kindle
View all posts by misfit120 →
This entry was posted in Uncategorized and tagged Beatles, Dead Skunk, Deliverance, Montana, poaching, roadkill, wildlife. Bookmark the permalink.

1 Response to Montana Ok’s Scarfing Up Road Kill. YES! What We’ve All Been Waiting For.