Once Again Prostitutes, (and one Senator) Get A Bad Rap.

Like Rodney Dangerfield used to say in his act, “I get no respect.”  Of course, Rodney wasn’t a prostitute, but if he were, he still wouldn’t get any respect.

“Hey! Don’t feel too bad Misfit. I don’t get any respect either.”

You would think that an age-old institution such as prostitution would by this time and in this day and age get the respect it so well deserves. But nooooo.

Now here’s an example of the disrespect prostitution is getting in a recent headline involving yet another Congressman who allegedly had an encounter, so to speak, with a prostitute. The headline reads, “Menendez Forcefully Denies Prostitution Allegation.”

Referring to Senator Robert Menendez, (59) D-N.J., who, as the headline states, “forcefully” is denying those allegations. I guess that means with much force. Like perhaps yelling or jumping up and down or slamming things on a desk to appear somewhat forceful. My guess anyhow.

Menendez, according to the news reports, engaged in relations with a prostitute in the Dominican Republic. To clear things up here, “engaged” in “relations” does not mean that Menendez was “engaged” to the prostitute or had sex with some of her relatives, as in “relations.”

Sometimes ya just have to make these things perfectly clear.

All these allegations began when the sex police, better known as the FBI, conducted a search of the West Palm Beach offices of a Florida doctor who was the Senator’s biggest political donor in his re-election campaign last year.

Why did the FBI search the docs place? Because a conservative website, “The Daily Caller” reported that Menendez had used a business jet owned by a doctor, Salomon Melgen, to fly to the Dominican Republic for trysts with prostitutes.

(trysts with prostitutes are similar to trysts with automobiles. Such as when you go to a car dealer and want to tryst out a newest car to see if it’s worth buying. In the case of prostitutes, to see if they’re worth riding) 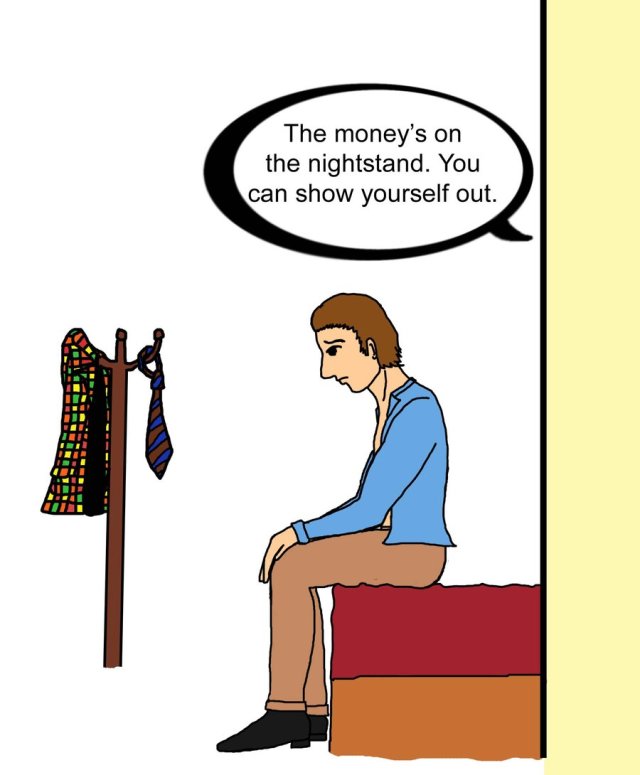 But, I’m thinking to myself. Yeah…soooooo what’s the big deal here? Even if Menendez did fly on the docs plane. He DID reimburse the doc some $58,500 from his own personal funds for use of the plane. Now why is this such a big deal and who cares? After all, Menendez is up for the chairmanship of the Foreign Relations Commission. What better way to get experience on foreign relations than to have a foreign relationship.

STOP right there Marvin!  I need not knowith anymore.

Do the words “Republicans” along with “conservative website,” and “sex” have ANYTHING to do with the fact that Menendez is a  (gasp) “Democratic Senator” and, as we all know, “sex,” prostitutes,” and that dastardly word, “Democrat” don’t mix with those other words.

This wouldn’t be politically motivated would it?

Nah. I’m just imagining things here. After all, Republicans, conservatives, and even cartoon characters and animals all actually have sex. Well, um…..as far as the prostitute factor goes, I really don’t think there are any cartoon or animal prostitutes. Regardless, EVERYBODY has sex. With or without prostitutes. Democrats and Republicans too…..as hard as that is to believe.

I’m still not so sure about those Tea Party people though. 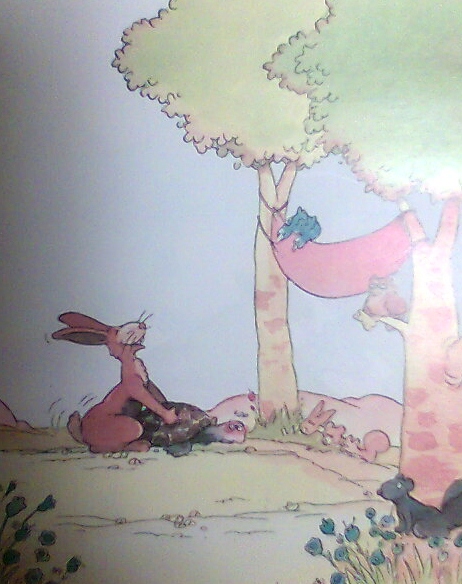 Yeah….did ya see any Congressional investigation because the Hare lost to the Turtle because he was so pooped out from having sex half way through the race?

Menendez said that he initially failed to properly pay for the trip because it just, “fell through the cracks.” And, as we all know, when things fall through the cracks, while one is in the heat of mind throbbing passion, involving such cracks, (sorry) you can obviously overlook a few important things.

So anyhow, why is it prostitution keeps getting slammed? Who, (excluding Puritans from Plymouth Rock days) gives a rats ass about anyone having sex with a prostitute? Oh yeah….excluding the FBI. Um….then again, that’s a toss-up too.

HEY! If the Secret Service, (which is not so secret when it comes to sex and hookers….can anyone say “Columbia?”) enjoyed a good round of prostitute sex, why not the FBI too. 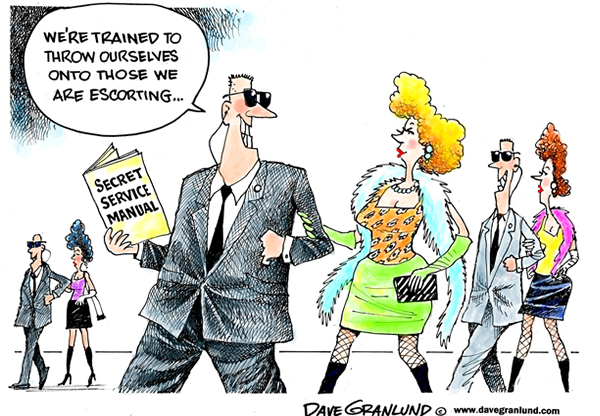 Lighten up guys. It’s only sex for cripes sake. It’s not like anyone’s blowing up anything or something. Well, um…..not THAT kind of blowing. I mean, you know….the “BOOM” stuff.

So, in conclusion, as I’ve always said, prostitution is an age-old institution. It’s always going to be around. And I personally do not care who uses their Visa or MasterCard to get laid. Senators, FBI, Secret Service, Menendez, Bart Simpson, or even anyone from the “Department of Homeland Security.”

After all, with respect to the “Department of Homeland Security,” what better way for those guys to protect the “homeland” and keep the economy moving than by employing the services of a hooker.

So how does that protect all of us folks? I’ll tell ya.

First of all, most married men wouldn’t think of knocking off their spouses for lack of sex because they could easily hire a prostitute. Unlike this poor guy pictured below. 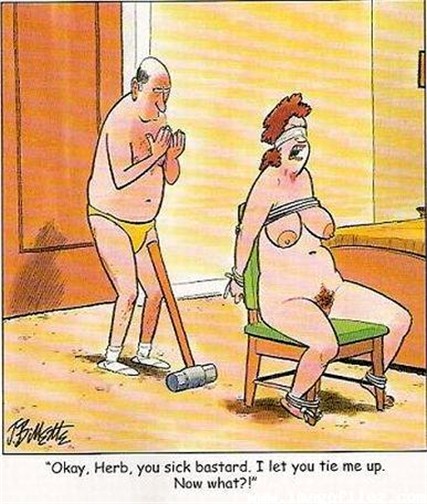 But the best logic to legalizing prostitution……………………..

You know how great you feel after having a good romp in the hay. You can face the day all primed up and ready to take on the world. Yes, solve the world’s, as well as your own problems because everything, after sex, is really GREAT!!!

So, with that attitude, just think of what a great job those people at “Homeland Security” could do protecting us from all of the bad guys, like terrorists, if they don’t have sex on the brain and can concentrate on catching the bad guys.

Think about it. Agents are watching for terrorists and bad no good nicks on a stake out and need to be on top of their game. No mistakes or errors. Suddenly a hot chick, or hooker, walks by, their attention is diverted, and while they’re watching that hot babe, some ratfink terrorist sneaks by them and escapes.

BUT…..after some really good sex……they’d never pay attention to any woman walking by and for sure catch the bad guy. How much more logic do ya need than THAT!

So….let’s cut Menendez some slack here. I’m sure he came back from the Dominican Republic all charged up and submitted some really good legislation in Congress because he really had a good clear head. Both upper and lower.

Lets hear it for the prostitutes……….doing their best to save America from the evils of bad guys and terrorists…………….

Former disc jockey, (Dick Jones) 30 years, and author of, "I Could Have Been Famous But Sex, Love & Life Got In The Way" available at Amazon.com books, & Kindle, "The Covert Chamber" a mystery novel available at Amazon.com and Barnes & Noble, and "Forgotten" the story of two WWI pilots who were forgotten for over 70 years available on Amazon.com and Kindle
View all posts by misfit120 →
This entry was posted in Uncategorized and tagged Bart Simpson, Congressman Robert Menendez, conservatives, Dominican Republic, FBI, Homeland Security, hookers, New Jersey, prostitution, Rodney Dangerfield, Secret Service. Bookmark the permalink.

2 Responses to Once Again Prostitutes, (and one Senator) Get A Bad Rap.