Aye….if yer a landlubber such as I, you have absolutely no idea what the hell anyone who spends a lot of time around ships is talkin’ about when you get into a conversation with any of them.

I came to this conclusion after reading a story in my local newspaper about a bunch of people who spend their time preserving ships. Mainly after reading this one paragraph:

“an apprentice shipwright at the shipyard, uses a caulking mallet, caulking irons and oakum to caulk the forward port bulwark planking.”

Or, as “Mad Magazine” used to say on many occasions, “it’s crackers to slip a rozzer the dropsy in snide.” 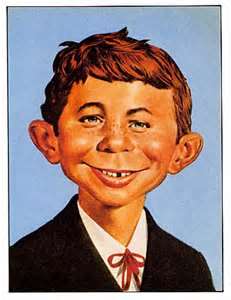 Now I personally have no freakin’ idea what “oakum” is, other than a distant clan relative of Mammy Yokum from Lil Abner, nor do I know what a “bulwark” is and why you need to caulk it. Unless it’s a bull they keep on ships and it needs to be caulked on occasion to keep it from leaking bull***t all over the poop deck. Sounds logical to me.

A former user of “bulwark” but now drug free.

So, as a public service, and also to satisfy my own curiosity, I decided to look up some nautical terms to see what they mean. Like that bulwark thingy. Which is, as I suspected, an actual bull that poops on a poop deck and needs to be caulked every now and then.

Actually a bulwark is the extension of the ship’s side above the level of the weather deck. Whatever a “weather deck” is. I guess a place where you can get the latest weather forecasts.

But, in researching a lot of these nautical terms, I did find a lot of sexual underlying meanings. Which, considering those long days and nights out there on the lonely ocean, doesn’t surprise me. Along with a bunch of terms that no normal person would ever figure out the meaning of if they happen to get into a conversation with a sailor. Which is one reason I never get into a conversation with a sailor.

Here’s a few that caught my eye mateys.

“Baggywrinkle.” Which is a soft covering for cables. But to me would imply a sailor attempting to describe some old chick in a bar that, after a few drinks, looks pretty good except for the bags and wrinkles.

“Balls To Four Watch.” Has something to do with the 0000-0000 on U. S. Navy watches or if you happen to spot a guy in the shower while on ship and he has four balls….. stand clear!

“Beat To The Quarters.” I thought I knew this one. I figured it meant that if someone on deck dropped a roll of quarters, you’d better beat the other guys before they got to them first. Actually it means prepare for battle, which could also mean fighting off those other guys trying to get those quarters.

“Booby-bird.” I was attracted to this nautical phrase simply because it gives me the opportunity to once again post a photo of a booby bird. In actuality, a booby-bird is a bird that has no fear and is easy to catch. Similar to a hooker with big boobs in a bar out to make a buck. 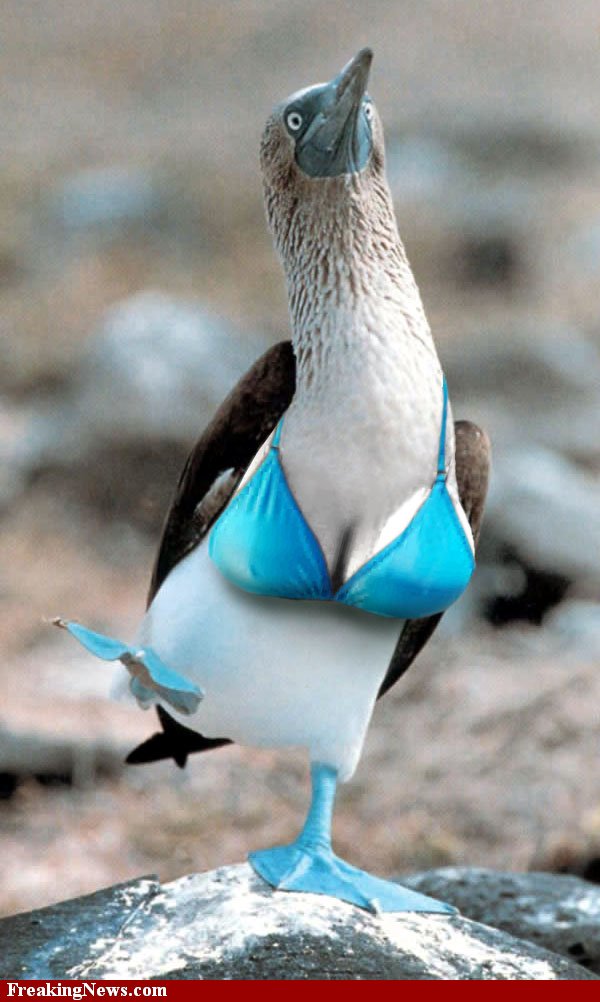 “Boy Seaman.” Not to be confused with “buoy seaman” or seaman of any kind. (I know what you perverts are thinking, but I’m NOT gonna go there) A boy seaman is a young sailor in training. Perhaps experiencing his first encounter with a woman, whereas seaman may come into play. Oops…I did go there…..sorry.

Now this next word is an actual nautical term so don’t get all bent outta shape because I used it. The word is, “cuntline.”  Honest!  Which is the valley between the strands of a rope or cable on a ship. (do you get the impression that sailors have waaaay too much time on their hands without the presence of a woman and begin to imagine female body parts whenever they look at things while on board a ship)

Geez…..gawd knows what the hell they’d think looking at a port-hole.

“Flemish.” Which is NOT something you get on your face like acne. It’s a weld placed in the bottom of a ship to keep wood dry. Although, ya gotta admit, it does sound like that little cartoon woman that’s always in Playboy Magazine. (below)

And, as long as we’ve managed to turn this innocent ship lingo stuff into sexual innuendoes, how about the term, “Harden Up.” Which actually refers to turning towards the wind. If you’re horny….I guess. Ya see, sailors just can’t get their minds off of sex.

Which may be how they get their “jollies.” Which is actually a Royal Navy nickname for the Royal Marines.

Yes…..sex on the brain once again with, “laid up.” Which means to reserve or mothball. Which could also mean you’re too old to have sex as well. Or….having sex while standing. Who knows for sure?

My favorite is the term used for a floatation device, “Mae West.” Now if you think I’m kidding about sailors always having sex on the brain just think of how the Mae West got its name. Yep….because the actual actress, Mae West, had big boobs which many sailors figured would keep her afloat if she were to fall overboard. I couldn’t find any stories related to if Mae had actually been thrown overboard from a ship and managed to float however. 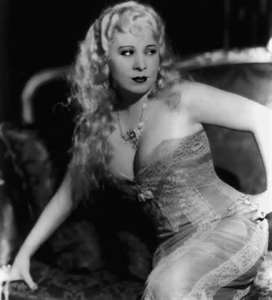 Mae West with a really good pair of floatation devices.

There’s the “poop deck” which, to me, would be a place to go to take a poop. But, it’s a high deck on the aft superstructure of a ship. Damn! On top of that, if you said to someone that you were, “pooped,” it wouldn’t mean that you pooped in or on the poop deck but were swamped by a high sea. Which in reality could also mean your toilet overflowed.

A “screw” is a propeller. Which is why sailors never use that word when recounting their sexual activities while on shore.

“You had sex with a what? Ohhhh, that must have hurt fella.”

How barnacles select a neighborhood to live in.

A “sextant” is not a perverted sailor as many of you would immediately think. It’s a navigational instrument used to navigate wherever it is you want to navigate to…..most likely that last bar you visited and can’t seem to find without using a sextant because you were stoned outta your tree the last time your were there.

“Slop Chest” is NOT an older woman in her 60’s that has sagging boobs. It’s the ships store or merchant.  As “Slop Effect” is NOT trying to fondle those boobs but the phenomenon by which a vessel moving quickly through shallow water creates an area of low pressure. Same effect as sagging low boobs, but less of a phenomenon. 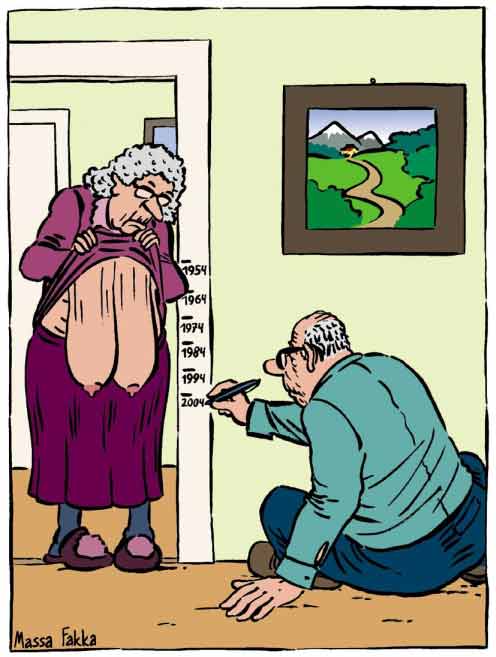 And finally, just to show you that all these terms do have sexual overtones, “Tramp Steamer.” Yes, I know, you’re all thinking it’s a ship carrying a bunch of tramps that sailors can get on board and have a good time with. It’s a ship with no fixed schedule. But, when ya think about it, so do hookers.

So thar ya have it. Why shipbuilding or being on ships can be very sensuous. Hope this clears up a lot of misconceptions for you. Especially that most sailors are a bunch of damn perverts with sex on their brains all of the time. Which I’ve proven is NOT a misconception.

So until tomorrow mateys, I’m off to “shiver me timbers” by watching an old Mae West movie and perhaps learn something about floatation devices…..nice soft cuddly floatation devices if ya get my drift ya land lubber.

Former disc jockey, (Dick Jones) 30 years, and author of, "I Could Have Been Famous But Sex, Love & Life Got In The Way" available at Amazon.com books, & Kindle, "The Covert Chamber" a mystery novel available at Amazon.com and Barnes & Noble, and "Forgotten" the story of two WWI pilots who were forgotten for over 70 years available on Amazon.com and Kindle
View all posts by misfit120 →
This entry was posted in Uncategorized and tagged booby birds, Lil Abner, Mad Magazine, Mae West, Playboy Magazine, sailing, sailors, sex, ships. shipbuilding. Bookmark the permalink.

1 Response to Shipbuilding Can Be Very Sensous….But Also Very Confusing.