Replacing The $1 Bill With A Coin. Hmmm….the Feds are bored once again. 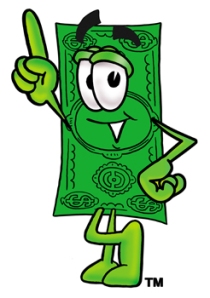 So, nobody can decide, or agree, on just exactly how to avoid the fiscal cliff. No big deal. As avoiding cliffs go. Which is why most roads with steep hills and long drops over the side have guard rails. So that ya can avoid going off a damn cliff…..fiscal or a road one.

But….that’s of no importance when it comes to the real problem. Which is the one dollar bill. Don’t ya just hate carrying around a whole wad of one dollar bills. Think of it……trying to carry, say a hundred of them in your wallet or pocket. Damn, I’d sooner carry a hundred dollars worth of pennies or quarters in MY pocket.

Only because at my age it sort of acts as a weight balance and keeps me from falling over or being blown away during a Nor’easter.

Yep. Now those brainiacs want to eliminate the paper version of the one dollar bill and come up with a coin to replace it. Brilliant!

Um….am I mistaken or did we go through this once before with some Indian’s photo on a dollar coin. NAH…I must be mistaken.

So, what’s the logic of Congress?

(NOTE) I hated to used the word “logic” and “Congress” in the same sentence.

Did I mention the vending machine companies have absolutely no interest in this proposal?

Not that Congress has a clue that the American public in general does not like the idea of replacing a paper bill with a coin. Nothing like that.

BECAUSE THEY’RE TOO FREAKIN’ HEAVY AND DON’T FOLD NEATLY INTO OUR WALLETS YA DAMN DUMMIES!

That and the fact that you can’t drop a dollar coin into a slot machine at many casinos anymore. I have considerable experience with this factor. Just sayin.’

Been there….done that. Sooooo, what’s the bad part?

So not only are the Feds looking to find a way to deep six the paper one dollar bill, but also how to change the metallic makeup of other coins as well using less expensive metal.

You may recall that major metallurgical changes in our wampum was over 50 years ago when Congress directed the U. S. Mint to remove silver, (not the Lone Ranger’s horse) from dimes and quarters and to reduce its content in half dollars as well. Most coins today I think are made out of “Reynolds Aluminum” foil. Great for carrying coins in your wallet or pocketbook and wrapping leftovers in.

As we all know, falling tin foil can be very dangerous.

The plan is as follows. Moving to less expensive combinations of metals like steel, aluminum and zinc.

I personally would have said, “tin” considering I throw away tons of tin cans from opening various vegetable cans during a week’s time and would really appreciate the opportunity to convert those tin cans into coins……in my basement……with my own printing press……..which obviously I’ll have to convert from making fake one dollar bills into tin coins.

(speaking of the Secret Service, which is part of the Treasury Department, you might find this story interesting about a guy that actually did print one dollar bills….verrrry bad looking one dollar bills. But got away with it for many years.  Enter “Mr. 880 Story” into your search bar and look for the “Snopes” write-up.)

The other plan the government has is to gradually take those dollar bills out of the economy and replacing them with coins. The subtle approach. For those of us who don’t have a freakin’ clue as to what the government is planning and then suddenly realize it when our pockets are overflowing with one dollar coins and say to ourselves….WTF!

But have no fear. This entire process, if implemented, of converting one dollar bills to coins would take, according to the “GAO,” (Government Accounting Office) about several years. As does everything else the government plans.

That would then put me well above the age of even giving a rats ass about paper or coin one dollar bills because I’ll either be dead by then…….

or, have been run over by a semi trying to cross the road to get my morning paper with a pocket full of one dollar coins weighing me down and not being able to move fast enough to get out-of-the-way.

As for the rest of you. Better start stashing your one dollar bills. And I don’t mean slipping them into a stripper’s g-string at some strip club.

Although if you’re gonna part with them eventually, I can’t think of a better way to do it.

Which leaves us with yet another burning question.

Just how are ya gonna stuff a one dollar coin into a strippers g-string?

(DONATE) Here’s your once in a lifetime opportunity to get rid of those bulky old one dollar bills you’ve been stuffing into your wallets and pocketbooks. You can use the MisfitWisdom PayPal donate link, (below) to free yourself of them once and for all in preparation for converting your wallets and pocketbooks into suitcases with which to carry those new dollar coins. Just sayin.’

Former disc jockey, (Dick Jones) 30 years, and author of, "I Could Have Been Famous But Sex, Love & Life Got In The Way" available at Amazon.com books, & Kindle, "The Covert Chamber" a mystery novel available at Amazon.com and Barnes & Noble, and "Forgotten" the story of two WWI pilots who were forgotten for over 70 years available on Amazon.com and Kindle
View all posts by misfit120 →
This entry was posted in Uncategorized and tagged dollar coin, Edsel, Federal Reserve, Lone Ranger, Mr. 880, Reynolds Aluminum, Sacagawea, Secret Service. Bookmark the permalink.