Whoever Wins “Powerball” Wednesday…um…can ya send me a few bucks?

Yep….this Wednesday an earth shattering event takes place. The revelation of a new Mayan calendar that says they were only kidding about the world coming to an end on December 21st. Funny people, those Mayans.

Well, personally I’m still waiting for that earth shattering discovery before the 21st. In the meantime, there’s another earth shattering event. “Powerball” and the largest jackpot EVER! It could be in excess of $500 million dollars. What the hell is anyone gonna do with $500 million dollars. Um, I really haven’t given it any thought myself but I’d sure as hell like to give it a shot.

One of the downsides of owning a business if your employees hit the lottery.

(Note to the person who wins that jackpot. Ya wanna kick in a few measly bucks to a poor blogger?  Just sayin.’ I mean, cripes, are ya really gonna miss a couple of hundred here and there?)

I know, it’s your proverbial “snowballs chance in hell” that “you’re” gonna be the one to win that jackpot. But, as my other half always says, “It only takes one ticket.” The problem being is that “I” never have that stinkin’ “one” ticket. I couldn’t even get one of those damn “Willie Wonka” golden tickets after buying hundreds of candy bars. Which is why I put on so much weight. Hey….no sense letting good chocolate candy bars go to waste. 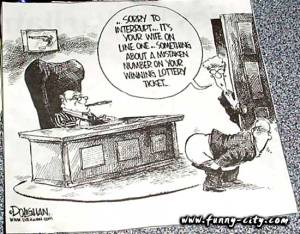 So what are the odds of hitting Powerball anyhow. The same as anyone donating to the MisfitWisdom blog……zilch.  Well, not actually zilch when it comes to playing Powerball, but damn near close to it. There are a lot of figures out there but from what I can figure out, according to some of those figures, the odds are one in 146,107,962. Yep….the same odds that someone will donate to my blog. AND….the same odds that someone, who actually hits Powerball…………..will donate to my blog.

Which is why if I hit the lottery I’m going into the “Witness Protection Program.”

But, that said, will I still buy a ticket?  Of course I will. Along with a gazillion other people…..many of them who do not write blogs, but could use a few extra spending bucks as well. Or…….have some changes they’d like to make in their lives.

So, what would I do if I won Powerball? Once I got out of the emergency room from shock. Or if my other half didn’t kill me to get her hands on the winning ticket. Not that I wouldn’t share it with her mind you, but she’d spend it on stupid stuff like food, clothes, fixing up the house, buying cat food, pocketbooks, and paying bills. You know, as I said, stupid stuff like that.

Sure, I’d spend some of it on myself, along with my other half, and the cats, but, being a compassionate person who has struggled throughout my entire life to make an honest buck, ‘cept for that one time I found $20 in a Wal-Mart store and ran like hell before someone said it was theirs, I’d start a “MisfitWisdom” fund to help people.

People who are in need due to unforseen circumstances like unscrupulous con men who dupe people out of their life savings, or someone who lost their home by no fault of their own. Or a person who was denied a medical procedure that would save their lives and were rejected by those wonderful caring insurance companies. The list is endless, but those are the kinds of people I’m talking about.

The only stipulation, or “catch” as some of you would ask, is that all recipients of the MisfitWisdom fund would have to promise to read the MisfitWisdom blog each and every day. I know, a tall order and a heavy burden to put on anyone, but it’s the only way I can build up my blog following. A steep price to pay for anyone receiving a MW donation, but, worth it. Unless they lie about promising to read it every day…..which would be impossible to lie about. Because, with my share of the $500 million dollars, I’d have bought one of those “Romper Room” mirrors and be able to tell exactly who’s keeping their end of the bargain. Heh, heh.

As far as spending all that money on lavish things for myself, nah, doesn’t interest me. To me, lavish things are being able to afford things like really great soft toilet paper, upscale paper towels, prescriptions that keep me alive, (excluding marijauna….I can grow that myself) and some extra bucks to keep buying “Willie Wonka” candy bars. Damn….I’ll find that golden ticket yet.

Of course my greatest satisfaction if I won Powerball would be the knowledge that I am contributing to the deficit strapped U. S. Government. Yes, by simply winning $425 million dollars I get to share my winnings with the IRS. Which amounts to my final take of $278.3 million.

Um…..when you think of those odds I mentioned earlier of hitting the Powerball jackpot, take this into consideration. The IRS hits a lottery jackpot every day of the week…..and THEY don’t even buy any freakin’ tickets.

Hmmmm. Maybe that’s the way to win. Get a job with the IRS. 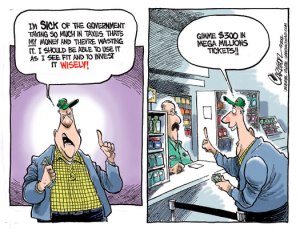 So folks. Give it your best shot. Get out there and pick your winning, or losing numbers. Ya never know. Like they always say, “Ya can’t win if ya don’t play.” Unlike the “Boston Red Sox” who did play but consistently lost. Or the N.Y. Yankees who also played, won a lot, but lost the big lottery ticket in the end.

One final note. If you do happen to be the lucky person who wins this Wednesday’s Powerball jackpot, the MisfitWisdom “donate” link is posted below.

Former disc jockey, (Dick Jones) 30 years, and author of, "I Could Have Been Famous But Sex, Love & Life Got In The Way" available at Amazon.com books, & Kindle, "The Covert Chamber" a mystery novel available at Amazon.com and Barnes & Noble, and "Forgotten" the story of two WWI pilots who were forgotten for over 70 years available on Amazon.com and Kindle
View all posts by misfit120 →
This entry was posted in Uncategorized and tagged blog writing, IRS, lotteries, Mayans, Powerball Jackpot, Red Sox, Romper Room, Willie Wonka, Yankees. Bookmark the permalink.

1 Response to Whoever Wins “Powerball” Wednesday…um…can ya send me a few bucks?