Pardon The Pun, But It’s Time To “Weigh In” On Gov. Chris Christie’s Detractors.

Yes, I’m guilty of making jokes about New Joisey Governor Chris Christie’s weight. But, just like the short jokes I endured all through my life, and the old line, “Got any gum on yer Dick,” because of my first name, all’s fair in love and war. Which has nothing to do with gum or Chris Christie, but it seemed like a good line to throw in.

Yes,,,(sigh)….I even said this photo of Christie & Obama resembled a photo of Laurel & Hardy. But, ya gotta admit…um..er…never mind.

Foist of all, oh, sorry, I was still in my Joisey type lingo mode. First of all, let me state that when I decide which candidate to vote for, I base it on what I know about the candidate, his platform, or if he still wears platform shoes, and his character. As in when Ronald Reagan, Sonny Bono, Arnold Schwarzenegger and the guy from “Love Boat,” Fred Grandy, (Gopher) portrayed various characters when they were movie stars or on TV.

They all made it in politics based on their character, not necessarily the ones they played, but their personal makeup. Which a lot of them put on before going before the cameras. And, of course, their moral character. Or, beating a dead horse to death, if they ever rode down an Interstate doing 60 MPH with a dog strapped to the roof of their car. That stuff.

(NOTE) I would never beat a dead horse to death. What would be the point if the horse was already dead?

So, that said, which I just did, I basically do not always vote along party lines. Unless there happens to be a really good party going on, the line is long, but the wait is worth it.

Now, getting back to my original line of thinking here, whatever the hell that was…….um…oh yeah, Governor Chris Christie.

Lately the Governor has been taking a lot of heat and sweating because he needs to lose weight. Um, no, that’s not it. Sorry. The heat I’m referring to is the heat he’s taking from a bunch of idiots within his own party. The GOP. Which, is beginning to look more and more like their initials, “GOP”…..”Goofy Old Party.” No offense to Walt Disney or Goofy.

The guy is an honest to goodness straight shooter. He says what he feels like saying regardless of whether it’s the politically correct thing to do or say. So he’s taking the heat because of his comments about President Obama’s visit to New Joisey after hurricane Sandy, at which time the president offered federal disaster help to the Governor’s state. 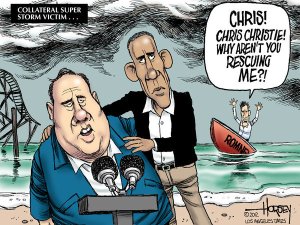 Obviously Christie was thankful for that pledge of support and expressed himself by praising the president for touring the destruction and later on during the week having the opportunity to talk to Bruce Springsteen on the phone courtesy of the president. May have been the Springsteen call that upset Republicans the most. I’d guess because they might have figured that it might have given the Governor an idea that he was “Born To Run” in 2016.

That, along with Hurricane Sandy, the 47% remark, the assault on women’s bodies, rape and abortion comments, not releasing all of his tax returns, killing off “Big Bird” and “PBS,” immigration, letting the auto industry sink, the “my wife drives two Cadillacs” comment, tieing his dog to the roof of his car, and almost barfing when he told a Southern crowd, “Ah just ate, grits and ah love em.”

So NOW, this week, it’s Christie’s fault. And Republicans are in no mood to forgive him for his close relationship with President Obama…..maybe even Bruce Springsteen.

One of Romney’s advisors was quoted as saying, “Christie allowed Obama to be president, not a politician.”

Christie’s response: “I will not apologize for doing my job.”

He’s also taking some heat from Rupert Murdoch. You know Rupert. The Media honcho who owns a lot of media stuff including “Fox Nudes.” Their motto: “Fair and unbalanced.” The last word referring to Murdoch.

Murdoch told Christie prior to the election, that he was treading on thin ice, (which is not good if you weigh as much as the Governor does) and that he, (Christie) would be guaranteeing Obama’s re-election. He told Christie he just damn well better reiterate his support for Romney, which he did the next day. After avoiding that thin ice out there on some New Joisey lake.

So in essence even though he praised the president, he still supported Romney, which goes to show you that he did what he felt was the right thing to do. Give thanks where thanks is deserved and at the same time support the candidate of his choice. Others, in that same position would have begged for Federal aid in the wake of the storm, got it, and then dissed the president simply because that’s what you’re supposed to do if you oppose the president.

But, not Christie. Which is why I love this guy. Um, not that I’d wanna marry him or something, or give him a big hug, because he’d obviously squish me, but because he’s an upstanding guy that does not let politics interfere with his true beliefs.

He’s…..gasp…..HONEST! So for being honest he gets all kinds of flack and blamed for Romney’s loss. You know what those people are in his own party that blame him for that are.

I personally hope that Christie runs for President in 2016. If he continues to display the honesty and straight talk that he’s famous for, I think he’d be a very attractive candidate. Um, attractive as in popular. Unless he goes on a really great diet and then really becomes attractive. Then again, I kinda like “Mike & Molly,” who also have a bit of weight on them. Hmmm…..surprisingly THEY haven’t been blamed for Romney’s loss yet. I said, “YET.”

The smartest crayon in the box however is billionaire “Home Depot” co-founder Kenneth Langone who said to Christie: “Governor, if you lead a miraculous recovery of the state of New Jersey, that’s all that’s going to matter. They are going to be begging you to run, just like they begged Eisenhower.”

Ya might wanna clip out this blog, post it on your fridge, and leave it there till 2016. Just so you’ll understand it when Christie runs for President, all of those Republican detractors suddenly support him, and I…heh heh….say, “Hey, I told ya so.” 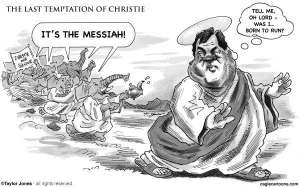 Then again…..if all else fails in 2016…..there’s always Chris Christie Claus.

(DONATE) The Bruce Springsteen approved MisfitWisdom PayPal donate link is posted below. If it is not highlighted, (blue) copy and paste the link into your browser. Make Governor Chris Christie and Bruce proud of you by contributing to MisfitWisdom. Um….well, at least make me proud of you and very appreciatve. If I ever run into the Governor or Bruce I promise to tell them you made a donaton. Honest.