Thanksgiving. Or: OMG!! I Can’t Believe I Ate All That!

First of all, Happy Thanksgiving from MisfitWisdom.

On this day when we all gather together to give thanks for, um….for….?   Oh yeah, the end of the 2012 political advertising season, “Black Friday” super sales, and Viagra, I thought I’d give you all a break from the usual nonsense by presenting you with some Thanksgiving facts, history, and some really neat Thanksgiving cartoons.

Try not to get any food on your computer while you’re reading today’s blog. I made the mistake of dropping some turkey gravy on my keyboard last year and still, on occasion, have to fight off my cats while writing.

Of course everyone will be enjoying a tasty turkey on this day. No thanks to Ben Franklin who, if he had his way, would have made the turkey the national bird, which would have meant no one would be able to eat a turkey. Fortunately, our forefathers chose the bald eagle. Lucky for the eagle, considering that if Ben had his way and turkey had won out we all might be eating eagle instead. The vote was unanimous for having the eagle as the national bird and when Franklin protested, he was told to go fly a kite.

Contrary to popular belief, the Pilgrims did not have big buckles on their clothing, shoes or hats. With no buckles, many of the Pilgrim men had constant problems keeping their pants from falling down. Hence, the reason you see almost every photo of a Pilgrim wearing those big buckles. The original photos, all taken of various Pilgrims with their pants down around their ankles were photoshopped and the buckles added for effect.

A Thanksgiving staple, cranberries, which are grown in cranberry bogs, owned by the Bogg family in Massachusetts and also related to former Red Sox player Wade Boggs, which the original bogs were named after, and, which is how Wade got into baseball in the first place rather than just growing cranberries on the Bogg farm. Ya see, fresh cranberries really bounce. That’s how you can tell they’re fresh. During cranberry bog harvesting break times, Wade would take swings at those cranberries and knock em outta the bog. Which is how he got his start in baseball. Unfortunately, Wade, used to tiny cranberries coming at him when he was batting at home in the bogs, was frightened at the thought of a huge baseball being thrown at him, and struck out a lot. He was eventually traded to the New York Yankees who in turn traded him to the Tampa Bay Rays who in turn traded him to the Plymouth Cranberries Triple A minor league team. Presently I think he’s returned to the cranberry farm and is “bogged” down a bit with all of the orders for Thanksgiving cranberries. 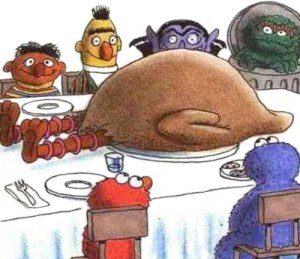 A sad note. Big Bird did not survive the bad press he got during the election thanks to Mitt Romney. On a happier note, the other Muppets will celebrate him this Thanksgiving.

A little known fact if you’re watching your weight on Thanksgiving. The average person consumes 4,500 calories on this day. Fortunately authorities have located that person and put him, or her on a severe diet. 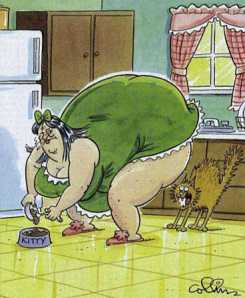 Another tradition on this Thanksgiving Day is the Macy’s parade. All sorts of colorful floats and those huge balloons. Um…..speaking of huge buffoons…oops….I meant “Balloons,”…..balloons……………….

Being an animal lover, it’s very hard for me to think about all the sacrifices turkeys have made over the years when it comes to Thanksgiving. Funny, I don’t feel the same way about chickens though. Go figure. Maybe it stems from my childhood when given a dare by the other kids, I wouldn’t attempt anything I thought was dangerous. Like asking Sally Dorfsinferk if she wore falsies. At that point all the other kids yelled out at me, “CHICKEN!”  Never did find out if she did or didn’t.

Come to think of it……does anybody still wear those things? Just sayin.’

Finally on this Thanksgiving Day, what every person in America is thankful for. “Black Friday.” The ultimate shopping day of the year. The only shopping day of the year where one has to wear combat gear to shop. Lest you be attacked  by some crazed shopper who wants that last super 5,000 inch HDTV 3-D with DVD, Internet, and coffee-making capabilities. Beware….it’s usually an old innocent looking grandmotherly type lady wielding an umbrella. Suggestion…..carry a can of Mace or a freakin’ stun gun.

I’m one of the smart ones. I do my shopping on the Internet. Never leave the house on “Black Friday.” Have my paperboy purge all of the sale circulars and coupons out of my paper before he leaves it on my doorstep. (Black Friday coupon thieves) And I do all of my shopping on “Calm Saturday.”  The day after “Black Friday.”

With all of that “Black Friday” frenzied shopping going on, I always get the best deals on stuff that got damaged by fist fights, shoppers who whacked other shoppers on the head with merchandise that got damaged in the process, and totally exhausted sales clerks who are zoned on tranquilizers after all that and are willing to give you the lowest price on anything just to get you outta the freakin’ store.

HEY! I’m not stupid!  didn’t fall off of the yam truck yesterday ya know.

And finally, one day of respite from all of the doom and gloom news we’re subjected to day in and day out. It’s enough to make any turkey want to end it all. Which, if any such turkey took it’s own life, I might consider eating THAT one. No guilt involved.

Happy Thanksgiving from everyone here at MisfitWisdom.

(DONATE) The every unpopular MisfitWisdom PayPal donate link is posted below. If it is not highlighted, (blue) it’s because, during this shopping season, I did not want some off the wall shopper to mistake it for a “Blu-Ray” DVD player and attempt to grab it thinking it was on sale. Just copy the link and paste it into your browser, (does ANYBODY EVER do that?) Guess not. Oh well, may the “bird” be with you.

Former disc jockey, (Dick Jones) 30 years, and author of, "I Could Have Been Famous But Sex, Love & Life Got In The Way" available at Amazon.com books, & Kindle, "The Covert Chamber" a mystery novel available at Amazon.com and Barnes & Noble, and "Forgotten" the story of two WWI pilots who were forgotten for over 70 years available on Amazon.com and Kindle
View all posts by misfit120 →
This entry was posted in Uncategorized and tagged Ben Franklin, Big Bird, Black Friday, Macys, Muppets, Newt Gingich, Pilgrims, Plymouth Mass., Red Sox, Shopping, Tampa Bay Rayss, Thanksgiving, Wade Boggs, Yankees. Bookmark the permalink.