Isn’t It About Time We Legalize Sex?

My name is General David Petraeus and I didn’t approve this blog.

I know what you’re all saying to yourselves. “But Misfit, sex IS legal.”

And, don’t they even have classes on how to have sex and seduce someone?

But for a guy or a woman to have to give up a career simply because they want to have sex. What’s with that! It’s just human nature.

Which I have also given to myself after a really good night in the sack……as surges go……when you’re my age……and sometimes those really good surges are far and in between.

Frankly I put the blame on women. Guys would have no problem avoiding sex if it were not for women. They’re everywhere for cripes sake. Ya see a woman and, shazam, male sex hormones take over. Personally I think it’s the boob factor. Boobs are constantly covered, except for the cleavage factor, and THAT drives men nuts. Ya don’t see sex scandals over there in countries where women’s boobs are exposed do ya. Take a look at all the years National Geographic Magazine has displayed native’s boobs. Do ya see sex scandals there? No!

Do ya see Hugh Hefner, who’s constantly surrounded by gazillions of boobs on a daily basis resigning? No! Ok, Ok, so he’s been married and divorced a few million times, but, he NEVER had to resign as president of Playboy Magazine. See what I mean.

It’s time we legalize sex. So what if a General or Congressman jumps his secretary’s bones. Who cares? Other than the FBI and the CIA. And that’s only because they’re pissed off because they weren’t able to get in on the action when the Secret Service scored with a few hookers in Columbia a month or two ago.

Which is why, if you’re married, and hold a powerful position, you should never confide in any woman drinking a cocktail.

The problem here is that when a man wants to have sex with a woman, they need to have the woman in question sign some sort of a disclaimer. Like…….

(Disclaimer) In the event I can no longer control my sexual desires for your really hot body, and the fact that I hold a prominent position in the government, you hereby agree to A. Swear that you will never write a book about our relationship or my penis size. B. You agree to never discuss our sexual relationship with anyone unless they too sign an agreement to never tell anyone about anything, including the size of my penis. C. In the event my wife, the FBI, CIA, Secret Service, Fox News, Jon Stewart, Steven Colbert and the cast of Saturday Night Live attempt to get you to reveal our relationship, you will claim that it was not a relationship with me, but with Bill Clinton. D. You agree to keep your boobs covered at all times when in my presence in public…..lest I lose it during a news conference. E. If all else fails, and we have to admit we had a sexual relationship, we split 50% of the book deal royalties.

Let’s face it. Sex needs to be legalized in all cases. At least between consulting adults. And….um…..hold on a sec…..I’m getting a call from someone in the blogger legal department.

“Well now ya do buddy. We monitor all blogs from the “WordPress” site and we happened to notice that your blog for today is about legalizing sex.”

“Yeah, so what’s the problem?”

“Sex is already legal pal. Why the hell are you wasting your time pushing for something that’s already legal? We here in the legal department don’t get it.”

“Well, um, I figured that it HAS to be illegal if General Petraeus had to resign as head of the CIA.”

“No, No, No you idiot. He resigned so as not to embarrass anyone any further and nip it all in the bud before someone in the media exposed him and blew the story wide open. He even said that his behavior was unacceptable. That’s why he resigned. Not because he was having sex that wasn’t legal.”

“So I’m wrong. Sex IS legal, but kinda illegal if you’re a General and you’re head of the CIA?”

“Damn, no, you just don’t get it do you. Sex IS legal, but it’s a grey area if you’re married, a General, and the person you’re having sex with wrote a book and happens to be around you all of the time. Sensitive information could be compromised due to the General’s position.”

“Position? Oh….you mean like positions when you’re having sex and……..”

“Yeah, that’s it….kinda. If you’re having sex, in whatever position, you could, in a moment of passion, blurt out all sorts of top-secret sensitive information and put the country and our national security in jeopardy. Suppose he blurted something out like, “Ohhhh Marsha, I’m soooo turned on I’m as big as one of those ICBM missiles we have pointed at Iran.”

“Ohhhhhhh. I get it now. So actually sex IS legal, but mostly if you’re not in any powerful position, (sex positions excluded) because if you’re an ordinary person having sex, (in any position) then it’s ok to have sex….right?”

“Correct a mundo.  So change your blog today to reflect the point that sex IS legal. And, ya might wanna slack off a bit on the “women with boobs” are to blame for all these sex problems too.” 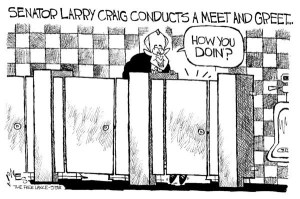 Well folks, I guess I was wrong. Sex IS legal so none of us have to worry. Unless we’re in sensitive positions. Not the sexual ones. I think.

All this is soooooo confusing.

(DONATE) The MisfitWisdom PayPal donate link, which is “positioned” directly below this paragraph, and has nothing to do with sex….I think. If it is not highlighted, (blue) copy and paste the link into your browser to get to the PayPal site. However, if you just happen to be pre occupied in a certain position at the present moment, um, finish what you’re doing and donate later on.

Former disc jockey, (Dick Jones) 30 years, and author of, "I Could Have Been Famous But Sex, Love & Life Got In The Way" available at Amazon.com books, & Kindle, "The Covert Chamber" a mystery novel available at Amazon.com and Barnes & Noble, and "Forgotten" the story of two WWI pilots who were forgotten for over 70 years available on Amazon.com and Kindle
View all posts by misfit120 →
This entry was posted in Uncategorized and tagged Bill Clinton, boobs, CIA, FBI, General David Petraeus, Hugh Hefner, Jon Stewart, Larry Caig, National Geographic, Playboy Magazine, Saturday Night Live, Secret Service, seduction, sex, Steven Colbert, Wordpress. Bookmark the permalink.