Two More Days!!! And The Constant Brainwashing Is Over!!! YES!!!!

Now now Fluffy….don’t fret…those awful bad people will go away in just two days and then we can safely watch Animal Planet.

But…..water boarding IS an option. Lesser of two evils.

I frankly think that given the choice of being water boarded or listening to political ads if I were a terrorist, I’d opt for the water boarding. At least if you’ve had enough, you can always just drown yourself.

“Ok Achmed, you gonna talk or are we gonna give you another dose of Romney/Obama ads?”

“OMG…nooooooooo, please, please, no more ads…I can’t take it…please…..mercy….mercy…..anything….pound tiny wooden splints under my fingernails, put me on a stretch rack, dump a bunch of fire ants on me, tape my eyeballs open…ANYTHING….pleeeeeease!”

Obviously any self-respecting terrorist would give in. Hell, I’d talk myself if I had to watch political ads as long as we’ve been watching them. I believe its been about a year and a half. As far as I’m concerned political advertising should be relegated to six months of campaigning. If you don’t have a clue as to who to vote for after being subjected to six months of constant TV ads, then your freakin’ brain dead.

Like, what’s with these undecided voters? Can’t they make a freakin’ decision already? Somebody give those suckers a slap on the damn head or something for Gawds sake.

Can anybody say, “undecided voters.”

I look at it this way. I go into a grocery store, stare at a shelf with a variety of items that I’m contemplating which one to buy, and in less than ten seconds, I’m outta there. Of course my other half takes a bit longer when standing in front of those choices. It’s like the price on the item is gonna magically drop if she stares at it long enough. Drives me absolutely nuts.

So, if politicians campaign from, say the May before the election in November, which amounts to just about six months or so, why couldn’t we all make up our minds by then? Cripes, if ya walk into a singles bar and decide to hit on some chick it doesn’t take you all night to make that decision. And THAT’S a big decision as far as I’m concerned. You could wind up jumping in the sack with that person, fall in love immediately, (guys are sometimes shallow that way when it comes to sex) and then spend the rest of your life with that person.

(NOTE) If you just happen to be sitting in a singles bar reading this blog and you’re gonna hit on that hot chick next to you cause your pants are on fire, fire up your smartass phone and go to “YouTube,” search for “Meatloaf’s” “Paradise By The Dashboard Light,” listen to the lyrics verrrrrrrry carefully, then decide if you still wanna hit on her. Just sayin.’

Of course, in this instance the correct decision would be to immediately beat feet….or paws.

In elections, if you kinda like make the same decision, you’re only stuck with that candidate for four years. Damn….what’s wrong with this picture? Hmmm…..maybe marriages should work the same way……ya think?

“Dear, it’s been four years since we’ve been together and it’s time for a change. You haven’t lived up to your promises of constant mad passionate sex and besides that, our household deficit has skyrocketed what with your shopping trips to J.C. Penny.”

“WHAT!  You’re dumping me after four years! Look at my record. Meals on the table every night, I do your ironing, wash your stinky clothes, and endure hours of channel surfing when football games are on. You’re not gonna find another woman like me ya know!”

“Yeah, well your four years are up and it’s time for a change. I posted your stats and photo on “Craig’s List” along with four other prospective candidates and according to the “PEW” and “Nielsen” polls you’re not doing very good. Unless, you manage to pull in a lot of votes from Ohio, which, as we all know, decides not only the Presidential elections but everything else as well.” 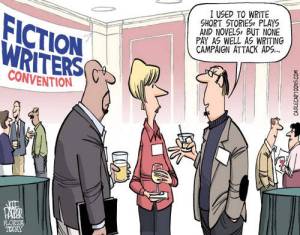 But, when ya think about political ads….it’s still fiction. And…..just as scary.

See, relationships could go the same route as campaigns. Maybe even running TV ads where spouses could promote their own platforms in order to hold onto their current marriage position.

Um….on second thought, that would only mean more campaign ads on TV. Damn!

Hmmmmm. How can all this be rectified?

Well, considering that if the country’s problems aren’t solved within the first week of a candidate taking office, I think we should be able to fire who ever is in charge at the end of each week. Kinda like a revolving door policy. You know. If they don’t end the war in one week, or make a gazillion jobs available for everybody, cut the deficit, lower unemployment, and guarantee a chicken in everybody’s pot, fire the bastard.

Then give the next guy the same opportunity. No progress in one week. Fire the SOB.

We all know that if ya can’t straighten out all of the world’s problems in four years, after someone before you screwed things up for 8 years then you’re outta there. Let someone new take over who has all the ideas on how to solve the problems that face us in one weeks time. Yep….all any candidate needs is one week. Screw that four-year stuff.

HEY!  That’s it. the answer to all of our constant TV ad problems. Eureka!

We elect a President every week of the year. And whichever one is able to solve the world’s problems gets to stay on another week…..until he f**ks up. Then on to the next one.

Then every candidate would have the opportunity to be President. Who the hell would give a damn which party is in power as long as we could dump the sucker after a week.

Hey…is this a brilliant plan or what!

AND….on top of all this…..we’d finally have a logical reason to explain why Donald “Lemon Lips” Trump exists, other than taking up valuable space on earth.

He’d be the guy, after a President is in office for a week and really sucks at the job, to go into the Oval Office and say to him…. 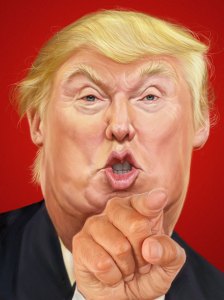 Geez…..sometimes I just amaze myself at how brilliant I can be.

(DONATE) The MisfitWisdom PayPal donate link is posted below. Unlike TV political campaign ads that will go away after Tuesday, the PayPal link will not. Too bad. So, you might as well just accept the fact that it’s there and make a donation. If the link is not highlighted, (blue) just copy and paste the link into your browser to get to the PayPal site. Regardless of your party affiliation, all donations are accepted.

Former disc jockey, (Dick Jones) 30 years, and author of, "I Could Have Been Famous But Sex, Love & Life Got In The Way" available at Amazon.com books, & Kindle, "The Covert Chamber" a mystery novel available at Amazon.com and Barnes & Noble, and "Forgotten" the story of two WWI pilots who were forgotten for over 70 years available on Amazon.com and Kindle
View all posts by misfit120 →
This entry was posted in Uncategorized and tagged Craigs List, donald trump, election 2012, I Can't Get No Satisfaction, J.C. Penny, Neilsen Polls, Obama, PEW Research Polls, Political TV ads, politics, Rolling Stones, Romney, singles bars, terrorists, torture, water boarding. Bookmark the permalink.