More Signs The Mayans Were Right. Terrorist Squirrels In Vermont

Every since the theory of the world coming to an end on December 21st of this year was predicted by the ancient Mayans, I’ve been carefully watching for signs that the end is near.

Ignoring, of course, that nutcase Harold Camping and some bozo who keeps shoving a sign in front of my truck every time I go to WalMart that says, “The End Is Near.” Unless he’s just some guy who hates political ads and is expressing his delight that in just a few weeks all these political ads will be done with. In that case, he’s no bozo.

But, there are signs that the Mayans may be right on target. I’ve written blogs about giant cockroaches, strange-looking animals, huge giant squid eyeballs washing up on beaches and Donald Trumps hair. Surely signs that the world is coming to an end.

And now another sign that tells me that I’d better be stocking up my basement with cans of Spam and beans. Just in case the world does come to an end on the 21st of December and I somehow survive. If you know anything about Spam, the canned meat, you’ll know that it survives in that can for over 15 years. Along with e-mail spam. Being way over the hill myself, those cans will outlast me. So I’m prepared.

In Montpelier, Vermont squirrels are going nuts. YES….this is yet another sign of impending doom. Most of the time squirrels just romp around doing whatever it is squirrels do to pass the time of day. Gathering nuts, pissing off birds by raiding bird feeders, leaping from tree to tree and taunting indoor cats.  That’s what squirrels are supposed to do. Besides the really stupid ones who run in front of your car, panic, and then get squished.

Squirrel outside my patio window taunting the cats

But in Vermont it’s getting way out of control. Clarence Boston, who doesn’t live in Boston, but whose last name really is “Boston,” and is an orchardist, which I guess is some sort of fruit type grower person, or conducts orchestras in orchards, has been doing this “orchardist” stuff for over 33 years and says that he hasn’t seen this many squirrels infest areas as long as he’s been orchardisting…..(my word)

One of his major complaints is that the squirrels wait till his apple crop is nearly ripe to swarm into trees from nearby forests and eat almost half a tree’s fruits in two or three hours. What ticks him off the most, beside the fact that squirrels do not know how to make apple pies, is that they take a bite out of an apple, leave teeth marks, and never finish the apple. Thus making the apples worthless for retail sale. 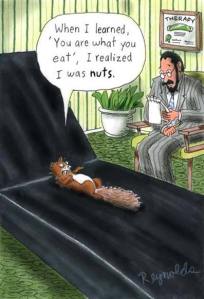 Plus, these terrorist squirrels are eating the barks off of trees, making nests in attics, chew through wires in homes and leaving squirrel poop all over the place. (squirrels do not have very good bathroom manners)

On top of all this, drivers are dodging squirrels that dart across roads making it very hazardous to talk on one’s cell phone, text while driving, eat or follow your GPS directions. Can’t do all those things while a damn squirrel is committing suicide.

What drivers see shortly before running over a squirrel

But the one line that Mr. Boston, that orchardist guy said that got me to the point of thinking that this may be all connected to the Mayans end of world theory, is when he said, “I am somewhat stunned. You get used to looking at disasters. It just happens. But this one is new. It’s different.”

YES! “Different!”  Squirrels are trying to tell us something. The end is near. The Mayans were right. Repent! Panic! Panic!

Unless, of course, I’m just reading too much into this stuff and due to the lack of a good supply of acorns last year, squirrels spent a lot of time at home doing what male and female squirrels do when they don’t have a lot of acorns to polish up and store……they spend quality squirrel time together and make baby squirrels.  Which may account for the massive amount of squirrels in Vermont this year.

Hmmmm.  Maybe I am reading too much into this. After all, it’s just a major problem up there in Vermont. Maybe the Mayans got it wrong and it’s just Vermont that’s going to fall off the face of the earth on December 21st from an overload of too many squirrels.

Which may account for the fact that in New Hampshire a few years ago the “Old Man In The Mountain” collapsed. Most likely the cause of squirrels storing too many acorns on top of that mountain.

In either case, I think I’m just going to keep a close eye on developments as we near December 21st. As well as stocking up on Spam.  I’m NOT gonna start going into a state of panic right now.

Next to cockroaches, the only other thing that will survive when the world ends on December 21st.

Unless that guy with that sign that says, “The End Is Near” is found dead alongside the entrance to Wal-Mart with a bunch of half eaten apples and acorns and there’s evidence that squirrels had something to do with his demise.

(DONATE) The completely squirrel free MisfitWisdom PayPal donate link is posted below. If it is not highlighted, (blue) or half eaten with squirrel teeth marks, simply copy and paste the link into your browser to get to the PayPal site. You will not have to worry about suicidal squirrels darting in front of you as you make your donation. PayPal has installed squirrel donation sites for them to donate which is located in a separate part of the PayPal building.

WTF! Now I’ve got a damn squirrel and moose stealing my “save the day” line…..

Former disc jockey, (Dick Jones) 30 years, and author of, "I Could Have Been Famous But Sex, Love & Life Got In The Way" available at Amazon.com books, & Kindle, "The Covert Chamber" a mystery novel available at Amazon.com and Barnes & Noble, and "Forgotten" the story of two WWI pilots who were forgotten for over 70 years available on Amazon.com and Kindle
View all posts by misfit120 →
This entry was posted in Uncategorized and tagged donald trump, Harold Camping, Mayans, Mighty Mouse, New Hampshire's Old Man In The Mountain, SPAM, squirrels, Vermont, WalMart. Bookmark the permalink.