Does Anybody At “Dunkin’ Donuts” Have A Freakin’ Clue….or a specific donut?

Yes, I know. I’m getting all bent outta shape today over a donut. Well, actually it’s about “Dunkin’ Donuts” themselves. “Dunkin Donuts” corporate to be even more specific. I know this isn’t an earth shattering end of life as we know it rant, but, to me personally, “IT FREAKIN’ IS!”

Now why would a really calm, (when I take my daily tranquilizer) person such as me get all ballistic over a donut?  I’ll tell ya why. Because I’m nucking futs, that’s why. AND….because I’m tired, tired I tell ya, tired of filling out a survey that asks me how I enjoyed my visit to “Dunkin Donuts” and when I tell them exactly how I enjoyed my trip, they ignore me. The nerve of them bozos. Don’t they know who they’re dealing with here?

They’re dealing with a nutcase!  ME!  First of all, before I go into my donut rant, take a look at what states have Dunkin Donuts. I’ve listed all of them to show you how big they really are, what state has the most DD’s and what states have none. (if you do not see your state on this list, ignore today’s blog because you obviously have no idea what a donut is) 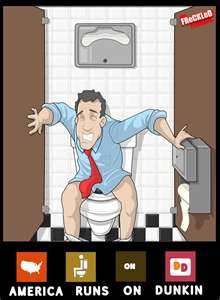 NEVER drink too much coffee……just sayin.’

You’ll notice, if you were quite observant, that Massachusetts has 1,018 DD’s. So THEY will greatly appreciate this blog. If they take time from gorging themselves with donuts long enough to read it. However, states like Alabama, California, Kansas, Louisiana, and Minnesota, that have only 1 DD, I have one thing to say to them: “Quick, run them suckers outta town before you get hooked on their donuts.”

Nevada and West Virginia only have 2 DD’s. I’m assuming one is in a casino, disguised as a slot machine and the other in a coal mine somewhere that only serves black coffee.

So, where am I going with all of this?

Ya see, it’s like this folks. I absolutely can’t stand stupidity when there is simple logic involved. I mean, it’s not like I’m asking “Dunkin Donuts” to spike their coffee with a shot of Jack Daniels or something.  All I freakin’ want is a specific donut. ONE STINKIN’ SPECIFIC DONUT!  Which, I might add, I can get if I drive 45 miles into another state…where, for some odd reason, they have that donut, but the state I live in does not.

WHAT! Is there like a ban on this donut or something? Is it against the law to sell this particular donut in my state?  Is there an activist organization hell-bent on keeping this donut out of people’s hands in my state? Is the “Tea Party” involved in this? After all, they could hold something against “Dunkin Donuts” for promoting coffee more than tea.

Now, this donut, which I would eat for the rest of my life if confined to solitary confinement in an institution somewhere is a very simple chocolate covered lemon filled donut. Kinda like a Boston Cream donut but with a lemon filling. So, you say to yourself, as I have on many a frustrated occasion, WTF does it take to fill that very same donut with lemon instead of that Boston Cream stuff?

Insert lemon gizmo filled with lemon filling into the donut hole and that’s it! Do ya have to go to chocolate filled lemon filled donut school to grasp that concept you nerds at “Dunkin Donuts?”

Unless because Massachusetts has the most DD’s and the capital is “Boston,” they have some sort of deal with that state to only push “Boston” cream donuts on everybody. I think I’m getting paranoid here. 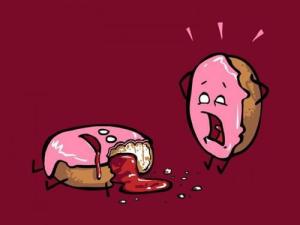 So, being the calm person that I am, (again, after my morning tranquilizer) I banged off a letter, (one of several I’ve sent to DD) and they never respond. WTF is with that! Why have a site you can send a message to DD if ya don’t respond?  Makes me wanna go out and buy a jelly donut at DD, take it out in the parking lot, and symbolically smash the livin’ crap out of it. ( See crime scene photo above) Then let the birds enjoy the remnants. Although I secretly think they’d like the lemon filled one better.

Again, this might not seem like a big deal to all of you who are completely satisfied with the donut selection at DD. Fine! But look at it this way. Suppose you were seriously addicted to a specific donut, and when you couldn’t get it, went out on a destructive rampage, smashing poor defenseless crullers against a tree because that was your only choice of donut. OR…..you couldn’t get your favorite spread of cream cheese on your morning bagel. SEE….this is how serial killers get to be serial killers.

Start your morning off wrong because you didn’t get that cream cheese or donut and the next thing ya know you’re making the headlines for donut abuse in a DD parking lot somewhere.

Not a pretty sight. And quite messy. Not to mention getting chocolate all over yourself and having seagulls eyeing you with baited breath. 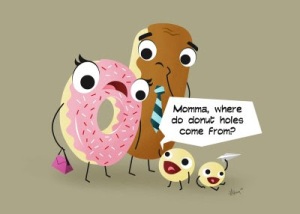 On top of all this, being the cheapo SOB that I am, and one of those money-grubbing “give me my freakin’ discount” seniors, I always fill out the survey you get when you get your receipt at any DD.  Gets ya a free donut when you buy a medium coffee.

BUT!  Because 99 percent of the time I usually take that coupon/receipt, (which gets me my free damn donut) to a DD and give them two receipts, one for me, one for my other half, some of the DD’s want me to do two separate transactions. WTF! Meaning, because I mostly use my debit card, I have to do it twice. WTF is with THAT! Some DD’s accept both slips on the same transaction, while others do not.

Am I missing something here? Is “Dunkin Donuts” …..”Dunkin Donuts” or are some DD’s not really DD’s but DD’s in disguise?  Yes…..I am fully aware that most DD’s are franchise owned. BUT….why can’t these jerks all get together and decide to do things uniformly?

Maybe it’s a conspiracy, like not being able to get my favorite donut, to make everyone uptight so that you’ll buy more than one cup of coffee.

“Hey Harry, here comes that flake who wants to use more than one coupon and is gonna get all bent outta shape because we don’t carry his damn chocolate covered lemon filled donut. Get ready to dial 911 just in case THIS is the time he really goes ballistic.”

“Yeah, but there’s always a first time ya know.”

“No problem. I have a can of “Pledge” lemon spray and it’ll calm him right down.” 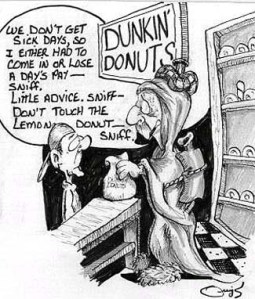 Or……this could be a reason I can’t get my stinkin’ chocolate covered lemon filled donut.

Sooooooooooooo. After all that ranting and writing to DD corporate with a heartfelt plea….what do I get for a response……….FINALLY!

Thank you for taking the time to contact Dunkin’ Donuts. We always appreciate hearing from our guests. It’s important to us to get feedback both good and bad about our products and the service you receive at our restaurants. We will make sure your comments get heard and shared with the appropriate people.
At Dunkin’ Donuts we value our guests and are committed to making your visits to our restaurants a pleasant experience. We look forward to the opportunity to serve you again soon.

I give up. BUT. I do have a plan. I’m going to buy a dozen Boston Cream donuts. Bring them home, suck out the Boston cream inside of them. Buy some lemon filling, suck the filling into a basting thingy, insert it into the donut hole, and pump in the lemon filling. HAH! Take that Dunkin Donuts!

Why is it I  still don’t feel like I’ve achieved ultimate satisfaction? (sigh)

(DONATE) The ever so calm and peaceful MisfitWisdom PayPal donut link, (munch) is posted below. If it is not highlighted, (blue) it may be obscured by chocolate and lemon. (wasn’t easy filling those donuts and the lemon filling with a damn baster) In that case, simply copy and paste the link into your browser. HEY!  If I can take the time to fill a freakin’ box of donuts with lemon the least ya can do is copy and paste that link. I’m the one with the mess here! (munch)

Former disc jockey, (Dick Jones) 30 years, and author of, "I Could Have Been Famous But Sex, Love & Life Got In The Way" available at Amazon.com books, & Kindle, "The Covert Chamber" a mystery novel available at Amazon.com and Barnes & Noble, and "Forgotten" the story of two WWI pilots who were forgotten for over 70 years available on Amazon.com and Kindle
View all posts by misfit120 →
This entry was posted in Uncategorized and tagged Boston, Dunkin Donuts, Pickles, senior discounts, seniors, surveys, Tea Party. Bookmark the permalink.

9 Responses to Does Anybody At “Dunkin’ Donuts” Have A Freakin’ Clue….or a specific donut?