Like I always say. You can’t make this stuff up. Ya see this photo of this innocent looking 8-year-old kid below. Cute isn’t he. He’s also gonna get around $63,000 dollars for what appears to be a really neat rock of sorts that he’s holding.

But….it’s not a rock folks. It’s whale barf.  Yep, some whale got sick a whale back, um, sorry, a while back, most likely from eating some really bad shrimp, and then the barf, I assume, floated around for a really long time until it became hard, then landed on a beach somewhere, in this case Southern Britain, where little 8-year-old Charlie Naysmith stumbled upon it, thought it was really cool, and brought it home.

Charlie, you may remember, was the kid who found the last golden ticket in a “Willie Wonka” chocolate bar. So, it’s completely understandable that he’d luck out and find whale barf worth $63,000. 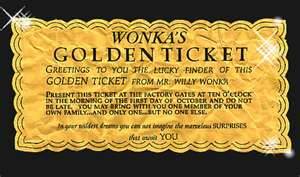 Damn kid found this ticket before I could.

To get a bit technical, scientists like to refer to “whale barf” as “ambergris.” Why? Beats the livin’ crap outta me. But, ya gotta admit, it does sound better than vomit or barf.

“Blacccch!  I had waaaaay to much to drink last night honey and I think I’m gonna ambergris.”

“Yeah, well I told ya if ya drank like a freakin’ whale you’d get sick!”

Now ambergris, (barf) is common occurence with whales who tend to eat a lot of stuff floating around in the ocean. It’s made up of a substance regurgitated, (barf) by sperm whales.

Scuse me a sec.

“Honey, forget going out for fish and chips tonight!”

I guess whale barf is really rare. Otherwise why would anyone in their right freakin’ minds pay $63,000 for it?  Not to mention, but I will, that it’s considered worth its weight in gold and that a guy in South Australia found a 32.5 pound of whale barf in 2006 and got $300,000 for it.

Charlie the Tuna, (mafia name) gets the bad news that “tuna barf” is worth jack squat.

Now this story just goes to show you that, 1. The things you can learn from reading the MisfitWisdom blog. 2. That regardless of how stupid you think something is, there’s always someone who will buy it from you. 3. W.C. Fields was right when he said, “There’s a sucker born every minute who will buy whale barf.”

Well, um, he didn’t actually say THAT, but he should have. Unless he actually did say that after selling some whale barf of his own. One can only imagine.

A prime example of why whales barf. Most likely because they are trying to lose weight and suffer from anorexia.

Now I got this story from “The Post Game,” which I assume is a newspaper, magazine, or a bunch of people who go around posting stick up notes on refrigerators as sort of a sport. The author, Robbie Levin, must be fairly new at the Post Game considering if THAT’S what the editors gave him to cover, he hasn’t honed up his reporting skills enough to cover really earth shattering news, or, he just might be their expert on whale barf and fish. Just a guess. Anyhow, thanks Robbie. Hope ya had a cast iron stomach researching this story.

Now if I could only find some sucker willing to pay big bucks for cat barf. Scientifically called, “hairballinitius.”

With five cats in my house taking turns coughing up furballs, hairballs, or whatever, I’d be rolling in dough. 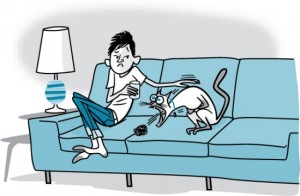 (UPDATE) *sniff*….I was going to comment on Clint Eastwood’s appearance at the GOP convention last night, but, if I said he appeared to be a rambling old man who was just given a 24 hour pass from the rest home I’d be dissing myself because I’m only 12 years younger than him. AND……..I’m still not talking to any empty chairs in my house……yet.

(DONATE) The MisfitWisdom PayPal donate link is posted below. If it is not highlighted, (blue) copy and paste the link into your browser to get to the donate site. The more donations I get, which to this point is zilch, the less I have to think of ways to make a buck, like collecting cat barf, just in case there’s a market for it in the future. Ya never know.

Former disc jockey, (Dick Jones) 30 years, and author of, "I Could Have Been Famous But Sex, Love & Life Got In The Way" available at Amazon.com books, & Kindle, "The Covert Chamber" a mystery novel available at Amazon.com and Barnes & Noble, and "Forgotten" the story of two WWI pilots who were forgotten for over 70 years available on Amazon.com and Kindle
View all posts by misfit120 →
This entry was posted in Uncategorized and tagged ambergris, anorexia, cats, Charlie Tuna, Clint Eastwood, fish, W. C. Fields, whales, Willie Wonka. Bookmark the permalink.

2 Responses to WTF! Now Whale Barf Is Worth Money!!