How Mother Nature Sticks It To You…..The Old Bat.

Yes, once again it’s a peaceful quiet Sunday, and, as you all know by now, after I get over saying to myself, #@!&%$! because no one ever donates to this blog, and I’ve taken my morning tranquilizer, I tend to settle down in a blind stupor and decide what to write about that isn’t off the wall. Like I usually do during the week. I tend to get more ornery during the week due to the number of garbage trucks that whiz by my house on a daily basis on their way to the incinerator, which, is 1,000 feet from my front door.

Personally I think there’s waaaay too much garbage going to that incinerator on a weekly basis as far as I’m concerned. I have my suspicions that more is going on there than meets the eye.  Like maybe discount cremations.

Anyhow, I came across five guys from Santa Barbara, California who came up with the idea that they would take photos of themselves beginning in 1982 and every year thereafter just to show the changes in them as they aged. So each year they return to the same place, the same bench, along with the same pigeons, who never show any sign of aging, and they have their picture taken.  Below is a photo of them in 1982: 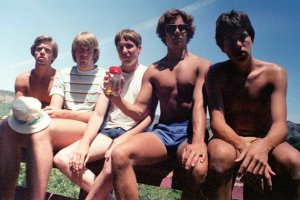 Photo from 1982 minus the pigeons.

Pictured above are John Wardlaw, Mark Rummer, (bet he gets a lot of “what a bummer” jokes) Dallas Burney, (his parents were most likely in to TV show “Dallas”) John Malony and John Dickson. Again, pictured below, are the five friends in a photo taken this year. Other than the “flab” gain, as one of them said, they don’t look too much different.

Photo of the same guys taken this year. Still minus the pigeons.

So, I decided that this would be a good idea for me to do as well.  The only drawback is that I’m too freakin’ old to continually take photos of myself over the years, considering that the odds are I’ll be pushing up daisies within the next ten years and most of the pigeons wouldn’t actually be pigeons but vultures waiting for me to drop if I sit on any park bench longer than 1o minutes.

BUT……..I decided to show you how Mother Nature sticks it to all of us, in the long run, by showing you MisfitWisdom photos from eons ago and up to today.  Without me actually having to sit on a park bench fending off vultures. Or perverted old ladies trying to hit on me. So here we go. A walk back in time with Misfit. (sniff) 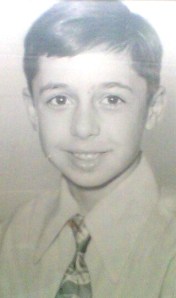 A third grade photo of Misfit. Young and innocent. I didn’t have many friends back then so my mother had to tie a bone around my neck so that the dog would play with me.

Still innocent and posing in my First Communion outfit, along with my grandmother, who was about 35 at the time. If women dressed like that today I’d be single and still using a bone around my neck so that the dog wouldn’t leave me.

Trust me, it gets worse:

Jumping ahead to 1959, because I basically can’t remember, or want to, those other years in between, this is Misfit in civilian clothes while in the U.S. Army in Germany. I dressed in civilian clothes whenever I could so that if the enemy attacked I could pass myself off as a civilian. Dressing in women’s clothes worked quite well too, but I didn’t do it as often because I kept getting hit on by the other GIs.

Just to show you that I did, on occasion, wear a uniform, this is also from 1959. This was my meanest grimace. Which I perfected in the event of coming face to face with the enemy. In my case it was my Master Sergeant.

I managed to hold on to the young and innocent look while in the Army and took my first plunge into entertainment at a U.S. Army service club.  You’ll notice that besides dressing really cool, I’m holding an actual 45 RPM record…..now extinct……along with those clothes I’m wearing.

Am I like realllly cool or what! I think the answer is WHAT!

Eventually I did survive my time in the Army by perfecting the art of potato peeling and keeping a low profile. Which, when you’re 5 feet 4 inches tall isn’t very hard to do. Also saved time on digging really deep foxholes like those big guys had to do.

My first break into radio broadcasting in 1963. As you can see I still had not perfected the art of dressing like normal people. But, when you’re on the radio, no one can see you, so I didn’t give a rats ass.

Tired of being ridiculed for my attire and lack of taste in clothes, I went with a more subtle look designed to attract a little more attention. 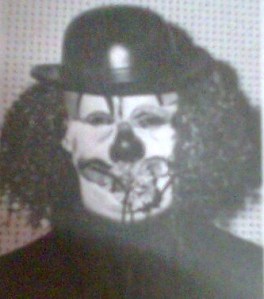 My new look, designed to show my real inner self, worked for a while but I eventually scrapped it when no one would take me seriously.

Desperate for attention and willing to do anything to meet a really nice girl, I turned to the one thing I was good at. (below)

Sooooo, being a failure as a “flasher” I went on to the next best thing, radio broadcasting. 30 years of acting like an idiot on the radio, kinda like I do here each day writing these blogs, and then eventually I reached retirement age never realizing my dream of becoming a huge celebrity. So now most of my time is spent flashing my other half, who also laughs as did Parton, and on occasion going to a Dead Sox game in Boston.  HEY…..if you’re constantly a loser might as well stick with a bunch of losers. 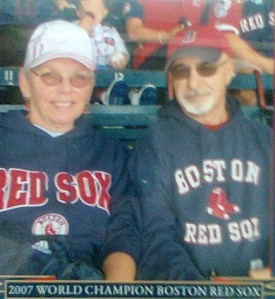 Misfit and Ms. Misfit at Fenway Park when there actually WAS a baseball team to watch. Hmmmm…..is that Terry Francona laughing in the background?

BUT…….writing this blog does have its advantages. As soon as I find out what they are, I’ll let ya know.

However, old habits are very hard to break, as in those guys who keep taking those photos. Oh yeah, as for those guys, Dickson is a restaurant columnist, Wardlaw is a photographer and filmmaker, Burney is a teacher, Molony works for UPS and Rumer is retired and most likely a dity old man.

http://youtu.be/CcHffTlD8wY  This YouTube Artie Johnson, Ruth Buzzi and Don Rickles skit will show you where I got my dirty old man inspiration from.

As for me, old habits , as I said, are hard to break, as you can see below. 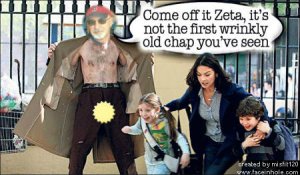 (DONATE) The MisfitWisdom PayPal donate link is posted below. As you can see it hasn’t aged in all the years I’ve posted it. If it is not highlighted, (blue) copy and paste the link into your browser before it gets too old. You know the old saying, “Don’t F**K with Mother Nature.

Former disc jockey, (Dick Jones) 30 years, and author of, "I Could Have Been Famous But Sex, Love & Life Got In The Way" available at Amazon.com books, & Kindle, "The Covert Chamber" a mystery novel available at Amazon.com and Barnes & Noble, and "Forgotten" the story of two WWI pilots who were forgotten for over 70 years available on Amazon.com and Kindle
View all posts by misfit120 →
This entry was posted in Uncategorized and tagged 45 RPM records, aging, Boston Red Sox, Clowns, disc jockeys, Dolly Parton, Fenway Park, flashing, Germany, Mother Nature, photography, radio broadcasting, terry francona. Bookmark the permalink.