“Um…no….but have you ever seen him actually wear a wedding ring?”

I totally agree wholeheartedly that anyone should be able to say whatever the hell they want to. Um….except the “F” word which, as we all know, is a very very bad word that will not only get you censored in a heartbeat, but guarantee you a straight trip to hell.

BUT….spreading racism with comments about the President and not being civil and calling him a bunch of racist names, or posting photos doctored to make him look silly, (not referring to editorial cartoons or funny ones) seems to me the wrong tactic to take if you want to make a point and be taken seriously.

Again, I have absolutely no problem with anyone disliking the President. It’s your choice. BUT……name calling, racial slurs, and not stating your reasons in a civil manner is kinda stupid if ya ask me.

WHY? Because, being somewhat of a logical person, I tend to look at both sides of an argument. Kinda like when I pick up a banana at the store. I always check for defects first. Hence, why I always get really good bananas.

BUT…when you say that you dislike Obama for this and that but do not give solid credible reasons other than “He’s ruining the country,” or “He’s the worst President ever,” or, He’s black and that’s the only reason he was elected,” you are just spouting off at the mouth.

OK….so you dislike him. FOR WHAT?  Make a list of all the rotten low down no good stuff he’s done that immediately affects you and I’ll read it with interest and so will others. Why is he the worst President?  How is he ruining the country? How was he elected because he was black? Then back up your argument.

Hey….look at it this way.  If I get into an argument with my other half and spout out on “Sodahead” that my other half hates me……what proof do I have.  So you reply and ask me my logic and I reply that she says I’m insensitive because I hate broccoli and won’t eat it.

So then, because a lot of people are going to come to the defense of broccoli, including those who grow that awful tasting vegetable, I’m going to get slammed by a bunch of broccoli right wingers calling me all kinds of names for defaming broccoli, yet…….without hearing my argument.  And if I even attempt to explain my dislike of broccoli, it won’t matter. I’ll be called un American, a vegetable hater, unfair to broccoli farmers, and one of the worst people living in my town. Perhaps even in America.

A lot of politicians, including Presidents were really bad. I won’t name any because I’ll be accused of picking and choosing. BUT…to claim that Obama is the worst!  Geez….read your history “Sodaheaders.”  REALLY….the worst! 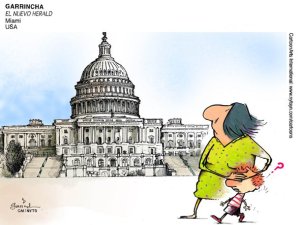 Sorry honeeee, I can’t let you see the place where all of that swearing you hear comes from.

OK….so here’s your chance. Step up and give me a “factual well researched”piece on why he’s the worst.  Might wanna include broccoli in there as well just so I can have a good argument with my other half about why I should not be persecuted for my dislike of broccoli. (I also dislike artichokes too….sue me)

Geez….I really hate to get off on a political tangent here because I just like to write humor. But almost four years of Obama bashing is driving me nutso. Almost makes me wish Moammar Gaddafi were still around so I could tell all of you to direct your hatred towards him.
Hmmmm. Maybe that’s it! Yeah…..some of you “Obama is the worst President ever,” people have no one else to hate.  Osama bin Laden is sleeping with the fishes. Gaddafi is somewhere in a desert sucking sand. Former Egyptian President Mubarak is somewhat on his last leg, and Pee Wee Herman doesn’t have a show anymore.

The safest thing to do for those of you who like to spread hate and discontent is to focus your efforts on someone EVERYBODY hates. THEN……it won’t matter if your credible or not. I mean, everybody hated Adolf Hitler, except Eva Braun, Hitler’s dog, and a few other guys. So posting a message on “Sodahead,” if “Sodahead” were around back then, and saying that Adolf is the worst dictator ever would make sense to me.

Of course the Gestapo would be pounding on your door within a few hours, but, “HEY!” at least you got to say what you wanted to say before they shoot your stupid ass.

See…that’s the difference folks. We can all go on any social media website, spew off hatred, and in some instances, if not all, remain completely anonymous as we attempt to spread all of that wonderful hate and discontent.  Freedom of speech.

But puleeeeese! If you’re going to spread all of that hate and discontent, be factual in your hate and discontent posts. My bio and name are in all of my MW blogs and I freely admit I HATE broccoli.  So bring it on…….call me the worst person in the world. Tell me I hate broccoli because it’s green. Tell me I’m ruining things for broccoli farmers.

And vile posts with no factual information to back up claims on “Sodahead.”

(DONATE)  The vile MisfitWisdom PayPal donate link is posted below. If it is not highlighted, (blue) it might have been censored by broccoli underground terrorists. In that case just paste and copy, or…is it copy and paste,..hmmmm……oh yeah, it’s copy and paste the link into your browser to get to the PayPal site. You might wanna donate simply because I’m “the worst blogger ever” and hope that with a huge donation I can be convinced to shut the “F” up.

Former disc jockey, (Dick Jones) 30 years, and author of, "I Could Have Been Famous But Sex, Love & Life Got In The Way" available at Amazon.com books, & Kindle, "The Covert Chamber" a mystery novel available at Amazon.com and Barnes & Noble, and "Forgotten" the story of two WWI pilots who were forgotten for over 70 years available on Amazon.com and Kindle
View all posts by misfit120 →
This entry was posted in Uncategorized and tagged Adolf Hitler, artichokes, broccoli, discontent, Eva Braun, freedom of speech, G.W. Bush, Gaddafi, Gestapo, hate, Mubarak, Obama, Osama Bin Laden, Pee Wee Herman, racism, Roger Rabbit, social networks, Sodahead, spinach. Bookmark the permalink.