Cat and Mouse Game With Blackie The Snake 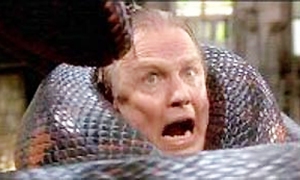 How I picture myself in a battle with this huge snake

There’s no logical reason a snake should be hanging around my yard. None what so ever.  Yet, here’s this humongous Anaconda man-eating snake slithering around my yard threatening me with his snaky sneer and those huge fangs. 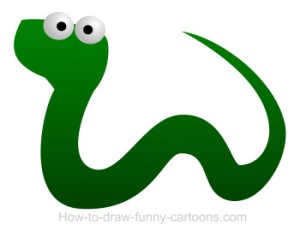 How the snake in my shed really looks.

Um…ok…..it’s not really that big and I actually never spotted any fangs on it but he DOES do a lot of slithering. Waaaay too much slithering.  Why in the hell isn’t he, or she, slithering out West somewhere, or, at least someplace where snakes can meet other snakes and do whatever it is snakes do.

What is it they do anyhow? Not only that, but how do ya tell a male snake from a female snake?  It’s not like they dress differently, or the females have higher pitched hisses. Snakes are snakes and I don’t like them.  Not that I’m discriminating against snakes mind you, because, um……ok, ok, I’m an anti snake person and I am discriminating against them. So sue me already.

Its boiled down to a cat and mouse game between Blackie and me. (I’ve named him Blackie because he’s all black and kind of reminds me of “Boston Blackie.”) (photo below) 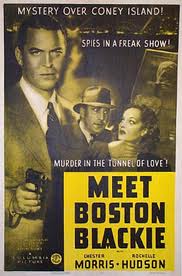 Although “Boston Blackie had a moustache, carried a gun, and my snake Blackie, as far as I can determine does not. Actually I haven’t gotten that close to him to find out. And I’m not going to either.

I’ts been going like this for the past month.  I venture out to the tiny shed in our yard and there he is just waiting. Just waiting for me to take him on.

But I’m not that stupid. I know how sneaky snakes are. Try and reason with them by using a little logic about how they should be out West somewhere and how their families might miss them and they get all emotional and wanna hug you.  Trouble is they wanna hug you and strangle the livin’ daylights outta you.  So I don’t attempt to reason with them anymore…..which is why its turned into a cat and mouse game between the two of us. 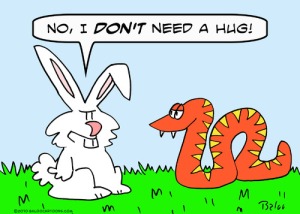 So Blackie is pissed off and so am I. He wants to set up home in my shed, loll around inside of my leaf blower, lie back and enjoy a comfy snooze inside of my lawnmower grass catcher and on occasion venture out in the daylight and sun himself exactly in a spot where I might bump into him……………

Thereby causing me to let out a blood curdling scream which sends both of us running, or slithering in opposite directions. (the snake is the one who does the slithering)

A day in the life of a snake

Now this routine has been going on for over a month now. I’ve even gotten to the point where I’ve done research on Blackie.  It seems that he’s what is known as a “Racer” snake, is 3 to 6 feet in length, (waaay to big as far as I’m concerned) and is quite common throughout most of the United States. Except in parts of Arizona, New Mexico, Texas and California, which is where all those other snakes are. He’s most likely anti-social.

Then I find out that he not only likes to hang out around my shed, but in grass, (and I have a lot of grass) and he loves to climb trees and hang out as well.

I’m becoming paranoid.  I can’t walk out in my yard without scanning the layout of all grassy areas, trees, my shed, lawnmower, leaf blower, and the front drivers seat of my truck. Only because he’s a “Racer” and ya never know if they have a tendency to wanna race and have mastered the art of hot wiring a Dodge Ram.  Just can’t be too cautious ya know.

And because my truck is a pickup, what’s to stop him from dropping out of a tree, landing in the back truck bed, snuggle up for a nice warm afternoon nap, and then, not knowing he’s back there, I get into my truck, tool down the road, and have a freakin’ snake staring at me through the back window.

HEADLINE:   “MAN SURVIVES TRUCK ACCIDENT ONLY TO BE STRANGLED TO DEATH BY HUMONGOUS BLACK SNAKE”

Yeah….yeah…I know…he’s not humongous, but when you’re casually attempting to get out your lawnmower and a snake pops out, trust me….it’s humongous! Damn SOB.

So, at this stage in the game, between the snake and I, it’s a standoff. Me standing off….him slithering off somewhere. BUT….I have a plan.

At first I was going to attempt to scare the snakebejesus out of him by taking my iPod outside, placing it next to the shed, and blast him out with continuous ABBA music. Surely that would drive ANY snake nuts.  But, on the slim chance that snakes actually like ABBA, I scrapped that plan.

So I went with plan number two.  This involves a rake, garden hose, a cooler with a snap lid, and the cooperation of my other half.

Now I know Racer snakes love mice and tiny rodents. So I’ve hired some illegal mice, (sorry Arizona) and set up a home for them near my shed. The plan is to nail that snake as he attempts to befriend, or eat the mice. Depends whether he’s hungry or lonely.

Once he shows his snaky little face, I’m gonna whack him with my rake, pin him down while my other half gets the cooler, opens the lid, shoos him into the cooler with a garden hose and slams the lid shut.  Then take him to my local FedEx and ship his butt to Arizona.

One of the pitfalls of using a garden hose…….a dumb snake.

Just wanna be sure he can’t find his way back. That and because Arizona has a tough immigration law, so if he as so much attempts to make it back to New England, the Arizona border patrol will nail that SOB in his tracks. Brilliant plan if I say so myself…..which I just did.

My other half says I’m nucking futs if I think she’s going to have any part in anything that has to do with snakes.

Look for my ad on “Craig’s List” for a new spouse under the heading, “Outdoorsman type of guy seeking adventurous type woman who likes to be hugged.”

(DONATE) The MisfitWisdom PayPal donate link is posted below. If it is not highlighted, (blue) copy and paste it into your browser to go to the PayPal site. If someone at PayPal wants to give you a big hug for donating, it’s ok. There are no snakes at PayPal. Snakes have nowhere to hold their wallets or carry their money so they do not go there for any reason what so ever.

Former disc jockey, (Dick Jones) 30 years, and author of, "I Could Have Been Famous But Sex, Love & Life Got In The Way" available at Amazon.com books, & Kindle, "The Covert Chamber" a mystery novel available at Amazon.com and Barnes & Noble, and "Forgotten" the story of two WWI pilots who were forgotten for over 70 years available on Amazon.com and Kindle
View all posts by misfit120 →
This entry was posted in Uncategorized and tagged ABBA, Anaconda, Arizona, Boston Blackie, Craigs List, FedEx, Jon Voight, New Mexico, Racer snakes, snakes., Texas. Bookmark the permalink.