It’s Sunday. So Whats The Big News? MMM Boobs and Some Nutcase Has Sex With A Teddy Bear. WTF!

I’ve come to the conclusion that the media have nothing better to do on a weekend but leave their reporting duties to interns with no news experience while they take off for Marthas Vineyard, go camping in the Rockies or just zonk out.

Otherwise why would two stories that made the news today be about some woman who’s decided to go for the whole ball, or “boob of wax” and opt to have her current MM implants enlarged to MMM’s.  (I’m assuming her current implants are M&M’s…um…no not those ya eat) well…um…..I suppose if you think about it you could kinda ea…um….neverrrr mind.

Her name is, (get this) Lacey Wild, (44) and she is currently sporting, (or carrying) around “L” cup boobs.  Which I think is somewhat bigger than the “Stanley Cup,” (hockey) the “America’s Cup,” (yachting) the “Ryder Cup,” (golf) or any cups I have in my cupboard. (I checked just to be sure)

So she’s going to have them, (the boobs and not a bag of M&M’s) enlarged to MMM’s because…..because…..”To give my kids a better life.”

Yes folks….to give her kids a better life.  Geez….if she had said to give her husband a better life I might have bought into that one.  But her KIDS! Hmmmm…..let’s see why.

She says, “If I have triple “M” implants, (no M&M’s inscribed on them) it will take me to the top, (no pun intended) five big breasted models in the world. It will increase my fame, (not to mention width) and earning power considerably. I want to make the most of this opportunity, to give my kids a good lifestyle.  I want to provide for them and pay for a college education, so they have the opportunities I don’t have.”

She goes on to say, “Now I need to support us.”  Hmmmm….the boobs or the kids?

Oh…sorry, she was talking about the kids.

Her kids do not want her to have the implants citing health concerns.  But Lacey is going ahead, (literally…..considering her boobs will enter a room first) with the surgery.

In order to prepare for the larger boobs she has to forgo wearing a bra to let her skin stretch. Staaaaaaaaaaand back if you’re around her folks. Only because her surgeon says that “the skin around her breasts are already extremely thin,” and cautioned her how dangerous it would be for her to undergo more surgery.

Not to mention any innocent bystanders who happen to be anywhere near her if those babies burst.  Not a pretty sight.

All her children’s friends from school, (mostly boys I’d guess) want to be her friend on Facebook. DUH!

“When I’m not acting or modeling, I’m just like everyone else.” she said.

Um….except in a crowded elevator Lacey. “Oops….sorry…could you push the button for floor 5 please?”

So there’s this guy in Cincinnati, Ohio, Charles Marshall, (28) who was placed under arrest for the fourth time for…..you’re not gonna believe this one…..for having sex in public with a teddy bear.  Yep…..bear molestation.

Ok….I know what you’re thinking. How can ya have sex with a stuffed animal? As usual, I shall, delicately as possible, explain this one.

He masturbated. Is that delicate enough for ya? HEY…I don’t make up this stuff for cripes sake. Don’t diss the freakin’ messenger. Blame it on those damn part-time news reporting interns. 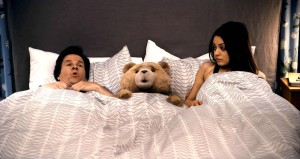 Strangely enough, a new movie out, “Ted,” has a scene in it with Mark Wahlberg in bed with…(gasp) a teddy bear. OMG! Is this gonna be like the Zombie thing and we’ll be reading all kinds of stories about people having sex with teddy bears! MARK! MARK! Say it ain’t so!

Most of the charges were some short stints in jail, small fines, and charges of disorderly conduct.  With a teddy bear I guess.  Although how it is exactly you get disorderly with a stuffed animal is beyond me. HEY….it’s not like a teddy bear can file sexual harassment charges against you or something. Um…unless it’s one of those talking type teddy bears.

Marshall has been arrested in an alley, mens room, and library doing his thing with the teddy bear. (so far the bear has not been identified) A judge told him to stay away from all public libraries.  So if you live anywhere near Cincinnati, you’re pretty much safe from encountering him in a public library.  Alleys and mens rooms, I’m not so sure.

My suggestion. Stay away from alleys and if you really have to use a restroom, use the one in the library. Might wanna stay outta the section of the library that has those little “Golden Books” about bears.  Jusssst to be on the safe side.

Authorities stated that it was unclear if Marshall used the same teddy bear on each occasion.

Seeing that no other bears have come forward with allegations against Marshall, it seems pretty clear that only the one bear was involved.

In an election year and with this “teddy bear” story breaking all over the news, Obama chooses to ignore anything that has to do with animals….like foxes.

So, there ya have it folks. The top Sunday news stories.  Which is why television sucks on the weekend and there are a lot of reruns.

Because there is no news on the weekends. Just a bunch of inane news stories about boobs, teddy bears getting assaulted and bloggers writing this stupid stuff….because…..

Everybody who reports the REAL important news is either out on Marthas Vineyard or camping in the Rockies and could give a rat’s ass about all this stupid stuff that happens on a weekend.

Except for me. I love this stuff.

(DONATE) The biggggggggg, (DDDDD) MisfitWisdom PayPal donate link is posted below. If it is not highlighted, (blue) copy and paste it into your browser to go to the PayPal site. PayPal does not discriminate against anyone with big boobs or who may visit their donate site carrying a teddy bear. However, if by chance you ARE carrying a teddy bear please wash your hands before pushing the donate button.

Former disc jockey, (Dick Jones) 30 years, and author of, "I Could Have Been Famous But Sex, Love & Life Got In The Way" available at Amazon.com books, & Kindle, "The Covert Chamber" a mystery novel available at Amazon.com and Barnes & Noble, and "Forgotten" the story of two WWI pilots who were forgotten for over 70 years available on Amazon.com and Kindle
View all posts by misfit120 →
This entry was posted in Uncategorized and tagged "TED, America's Cup, boobs, Cincinnati, Elvis Presley, M&Ms, Mark Wahlberg, Martha's Vineyard, Obama, Ohio, Ryder Cup, Stanley Cup, teddy bears. Bookmark the permalink.

1 Response to It’s Sunday. So Whats The Big News? MMM Boobs and Some Nutcase Has Sex With A Teddy Bear. WTF!