The Headline In My Paper Said: “Kansas Town Flushed With Pride.” WTF!

If you live on the East or West coast you might not get too excited about the opening of a new toilet. But I’m really beginning to wonder about those people out there in Kansas who can’t wait for the grand opening of a giant toilet-shaped building in the town of Lucas. And yes…….there are actual toilets inside.

I’m also wondering about the original newspaper editor who gave the “A-OK” to cover this earth shattering story that all of us obviously will be following with intense interest. (that includes the editors at my local paper) And to think, I actually fork over 75 cents a day to read this stuff.

Yep….this is a photo of the giant toilet in Lucas, Kansas Gives one a sense of relief….literally. Kinda resembles a mini casino if ya ask me. Maybe the town fathers might consider installing a poker slot machine so one could not only have a single “flush” but a “royal” one as well.

Not only that, but I’m beginning to worry about all of the people on eBay who are bidding on an auction to be the first to flush this toilet. Think I’m kidding. As of Friday afternoon 45 bids have been received and the highest bid was $215.   $215 dollars to flush a freakin’ giant toilet.

For cripes sake….come on over to the MisfitWisdom household and I’ll let ya flush my toilet for $2o bucks if that will make ya happy. Might be better than asking for donations as I usually do at the bottom of this blog every day.

The “Grassroots Art Center” in Lucas, Kansas has been working on this public restroom project for over four years. Long time to wait if you had to go to the bathroom.

So, after fours years of holding their legs crossed and butt cheeks tight, they have finished the project and decided to auction off the first flush.  It’s scheduled to open on June 2nd and bids on eBay will be taken until 6:35 pm CDT on May 25th.  The first flush is scheduled for June 2nd at 3:21 pm CDT.

Might wanna hold off going to the bathroom if you bid on this flush just so you can get your money’s worth.

Now this may be kinda tricky for anyone who wins the bid on eBay for the first flush at 3:21 pm.  Suppose you win and you really don’t have to go to the bathroom at 3:21 pm……then what?   Can you save your flush until you actually have to go?  I mean, why waste a good ceremonial flush with all those cameras and TV people watching you flush if you really don’t have to actually go to the bathroom. Seems like a waste.  Or…..lack of waste.

Play on words there folks. 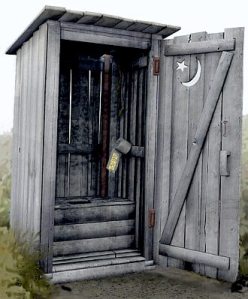 Now, if someone were to offer a “first dump” bid for THIS classic toilet on eBay I’d open the bidding at fifty cents. Just for the sentimental memories I have of many a cold night going to this luxury bathroom. And the splinters.

I would think that after waiting four years to finish this giant toilet-shaped building, the good people of Lucas, Kansas would want to not only have a real authentic flush, but real authentic poop as well.  Perhaps with a giant roll of toilet paper to go along with their giant toilet.

Hmmmm…….maybe a giant butt.  Nah……where ya gonna find a butt that size anyhow?

What would be really neat would be if they could have incorporated some sort of a water slide into their giant-toilet shaped building. You know,…….like when you flush the toilet, you jump in and it’s actually a water slide that propels you down a giant toilet drain and you come out of the drain in a toilet paper roll shaped boat. How neat would that be!

(Note to Disney, Six Flags and Universal theme parks. I thought of this idea first)

I apologize folks. It’s just that I live in a small quiet town and to see all of those people in Lucas, Kansas get all of the fun and attention constructing a toilet-shaped building, and receiving bids on eBay to flush it just made me a bit envious.

Actually it wasn’t the fact that they’re getting all of the attention because they built a giant toilet-shaped building. Geez…..even I could have done that.

It’s the fact that people are actually bidding MONEY on eBay to flush this freakin’ toilet for the first time that’s pissing me off!!! You’re bidding MONEY to flush a damn toilet you idiots!!!  What the hell is wrong with you people?  FLUSH THIS!!!!

But…..but…..ya see folks…..I don’t have a giant toilet for you to bid on or flush. Just this stinkin’ daily blog with a donate button link below that no one ever uses.  Yet, a bunch of people build a giant toilet and people bid on it to be the first to flush it.

(NOTE) This most likely explains why Dorothy and Toto were in such a hurry to get back to Kansas.

(DONATE) The MisfitWisdom PayPal donate link is posted below. Yes, I know, it does not have the allure of actually flushing a toilet, but think of all the joy you’ll receive by copying and pasting the link into your browser and going to PayPal to donate. It’s much more satisfying than simply flushing a giant toilet and watching your eBay winning bid moment go down the drain.

Former disc jockey, (Dick Jones) 30 years, and author of, "I Could Have Been Famous But Sex, Love & Life Got In The Way" available at Amazon.com books, & Kindle, "The Covert Chamber" a mystery novel available at Amazon.com and Barnes & Noble, and "Forgotten" the story of two WWI pilots who were forgotten for over 70 years available on Amazon.com and Kindle
View all posts by misfit120 →
This entry was posted in Uncategorized and tagged EBay, Kansas, Lucas, outhouses. Bookmark the permalink.

1 Response to The Headline In My Paper Said: “Kansas Town Flushed With Pride.” WTF!