Sometimes You Just Can’t Make this “Stuff” Up. Like…Farting Dinosaurs.

It never fails to amaze me the stuff you can find by surfing the Internet. You can probably tell by now that I have waaaay too much time on my hands by some of the stuff I write about.  But, think of it this way. I’m only writing about stuff that I found on the Internet while someone out there is actually getting PAID to write this stuff.

What stuff you ask?  Stuff like these two stories that popped up on the Web this past week:

“DID FARTING KILL THE DINOSAURS?”  and, “THE VIOLENT SEX LIFE OF THE “DAGGER PENIS” BUG.”

Geez….I can’t even scrape up any damn donations from ANYONE for rewriting this stuff. BUT……I do have one consolation. I don’t have to face any editor and explain why I wrote stuff on “farting dinosaurs” or the “sex life of a bug.”  Which obviously is Pulitzer Prize award writing stuff.

So let’s take a look at these two earth shattering stories today.

British Scientists, (those guys that have nothing better to do than check out why dinosaurs farted and became extinct) have concluded that because dinosaurs were mostly vegetarians, (except for those in the movie Jurassic Park) produced so much methane they triggered global warming which possibly hastened their extinction. 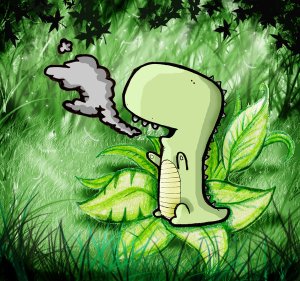 “Whew….that one was really a bad one. Gotta stop eating those scientists.”

Kinda like if you’re in a room full of people and let one go. The next thing ya know you’re either standing there all alone or someone has kicked your butt outside.

This study was about “dinosaur flatulence,” as the scientists like to call it, while us normal people call it, “farting.”

So how did scientists determine that dinosaur farting may have caused their extinction? By comparing flatulence produced by cows, because, like dinosaurs, cows basically eat the same stuff and fart as much as dinosaurs. Which is why you see an occasional cow standing by themselves in a field. No other cow wants to be around another cow with really bad flatulence.

And…considering these scientists figured out that a 140-foot Argentinosaurus, (Which I guess was a dinosaur from Argentina) would have consumed a least a half a ton of food each day, it would then yield thousands of pounds of methane discharges. (really bad stinking flatulence) which created a climate change in which the dinosaurs could not survive…or have relations with other dinosaurs because it was too damn hot and stinky what with all of that farting going on. (my theory anyhow)

Now, onto the other half of, “You can’t make this stuff up.”

This time it’s Swedish scientists who miss the singing group “ABBA,” and were extremely bored one day so they decided to check out the sex life of something called, “the dagger-penis bug.” Or, for those of you who want to know the technical term, “Xylocoris flavipes.” Might be a good opening line the next time you’re in Sweden at a bar and want to make an impression on some chick sitting next to you.

“Knock it off you damn pervert, I’m not that kinda girl!”

So anyhow, this “penis” bug is not a bug you want to have sex with….if you’re another bug of the same species.  Apparently this bug has some sort of attitude when it comes to mating rituals.  (this is not for the squeamish)

This is how it mates. A male on the prowl comes equipped with a spiny “dagger penis” which he uses to forcibly stab its way into a female’s abdomen, ejaculating once inside. So, instead of copulating through traditional methods, (buying the other bug a drink and then heading off to a motel) the male bug cuts to the chase by using his razor-sharp private part to pierce the female and then ejaculates inside of her.  (hope you’re not eating breakfast while you’re reading this)

So why do they do this?  Scientists say because it works out just great for the male bug because the female bugs who are wounded are vulnerable to multiple male partners, (Rush Limbaugh would obviously call them all sluts) and then they would lay a whole lot of eggs. Why? Because the female bugs, after being stabbed by the male bug, tend to worry about dying so their evolutionary inclination is to reproduce faster.

Kinda like what Demi Moore was thinking when she hooked up with Ashton Kutcher.

How to tell which Swedish bars prohibit “penis bugs” from entering.

So my question to both of these scientific studies is: “And we all need to know this why?”

Personally I now feel that my day has been fulfilled by knowing that dinosaurs became extinct due to farting and that this penis bug is into weird sex.

I also might add that now that I know that dinosaurs became extinct due to farting, that it could also hasten the demise of us humans as well.  As the Mayan’s have predicted, it might simply be due to all of the farting that we as humans do on a daily basis.

(DONATE)  The MisfitWisdom PayPal donate link is posted below. If it is not highlighted, (blue) copy and paste the link into your browser and it will transport you to the PayPal site.  It’s quite safe to visit the PayPal site as scientists have determined that no “penis bugs” have ever been detected on the premises. However, if you live in Sweden and feel a sudden prickly feeling and the urge to have many children, get yourself checked out immediately.  Um….please make a donation first. Thanks.

Former disc jockey, (Dick Jones) 30 years, and author of, "I Could Have Been Famous But Sex, Love & Life Got In The Way" available at Amazon.com books, & Kindle, "The Covert Chamber" a mystery novel available at Amazon.com and Barnes & Noble, and "Forgotten" the story of two WWI pilots who were forgotten for over 70 years available on Amazon.com and Kindle
View all posts by misfit120 →
This entry was posted in Uncategorized and tagged ABBA, Ashton Kutcher, bugs, Demi Moore, dinosaurs, Jurassic Park, Mayans, Pulitzer Prize, sex life, Sweden. Bookmark the permalink.