Home Security: Now You Too Can Have An ICBM In Your Apartment.

Hey….screw those panty waist namby pamby wouldn’t scare a respectable burglar security systems. Nope….give me a biggggg “Inter Continental Ballistic Missile” (ICBM) that I can put in my living room right next to my TV remote….jusssst in case during one of my favorite shows I need to defend my home and launch that sucker.  Just hope I grab the right remote at that exact moment.

Otherwise I’m either gonna switch channels or blow the bejesus out of the UPS guy when he rings the doorbell.

In London, which as you all know is, when I last checked, in England, they have come up with an innovate idea to protect everyone who attends the Olympic games. Which I assume will be held in England.

Surface-to-air missiles stationed on rooftops of an apartment block in the East part of London. This was confirmed by Britain’s air defense ministry, which is in charge of defending things and has nothing whatsoever to do with actual ministries which usually pray that they won’t be hit by a missile.

Around 700 people, according to the Associated Press, have been contacted and warned that the missiles and about 10 troops are likely to be based at their site for around two months. I would imagine the residents have also been told to stock up on bathroom tissue, various provisions, and to keep a very close eye on their teenage daughters as well. You know how guys get just sitting around guarding missiles with nothing else to do.

Britain has also said that 13,500 troops are being deployed on land, (not necessarily in a single apartment) and at sea and in the air to help protect the Olympics alongside police and security guards. (no, George Zimmerman did not apply for this assignment while he’s out on bail)

Also being deployed are Typhoon fighter jets, helicopters, two warships and bomb disposal experts.  None of which will be located at any of those apartments either. Only because it’s very hard to get a fighter jet and a helicopter into an apartment without anyone noticing.  It’s even hard to get those bomb disposal experts into an apartment without arousing suspicion because those guys are always on edge and shaking all the time……surely someone would notice them too. (just think Barney Fife)

Never, ever, tell a joke that ends in “boo” to a bomb disposal expert.

The British, known for their cutting edge missile defense technology, first developed the manned ICBM back in the 60's.

Most of the people who have been notified that their apartments are going to house ICBM’s are not too happy about it.

“Blimey blokes…..yer gonna put what in my apartment?”

“Well sir, we have to install this ICBM in your living room just in case a terrorist organization threatens or attacks anyone during the Olympics.”

“But why me?  I’m just an ordinary citizen living here in my cozy two room efficiency and I don’t have enough room as it is….blimey!”

“Well sir, think of it as being your patriotic duty for God and your country.  And after a while you really won’t even notice the missile….you’ll kinda get used to it. Maybe it might even enhance your decor. Use it to stick those sticky notes on it. Or you could decorate it with flowers and stuff.  Um….just don’t use any of those refrigerator magnets however.”

“Huh….I can’t use refrigerator magnets.  Why not?”

“Well sir, the magnets might interfere with the mechanics of the guidance system in the missiles and you could accidentally launch one in error.”

“Hmmmmm.  Um, exactly which direction do ya have that missile pointed at?”

“Cause if I just happen to forget about using a refrigerator magnet, and I accidentally launch that sucker, I want it to hit my ex wife’s apartment across town. Waste not, want not.” 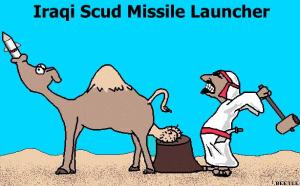 Not to be outdone by the British, the Iraqi's had their own ICBM program but ran out of camels. Which is why they lost he war.

The government also sent out leaflets, which are leafs with a message written on them, that tells residents that there are no hazards to those living in the buildings involved.

But……….jusssssst in case…..make sure you have a valid living will.

It went on further to say that the missile system would “only be authorized for active use following specific orders from the highest levels of the government in response to a confirmed and extreme security threat.”  Something like Rupert Murdoch’s newspapers attempting to hack into Prince Williams e-mail account.

Tune in tomorrow folks for yet another startling revelation from the British Air Defense Department:  How Queen Elizabeth’s hats have been converted into lethal frisbee explosive devices.

Damn those British are innovative.

(DONATE) The MisfitWisdom PayPal donate site link is posted below. If it is not highlighted, (blue) copy and paste it into your browser, or hat, and it will take you to the PayPal site.  Once there, should you notice suspicious looking devices that resemble missiles, fear not. They’re only located on the top floor of PayPal, so if you do happen to see them, just take the elevator down to the first floor, donate, and get the hell outta there before you get arrested for seeing something you’re not supposed to see.

Former disc jockey, (Dick Jones) 30 years, and author of, "I Could Have Been Famous But Sex, Love & Life Got In The Way" available at Amazon.com books, & Kindle, "The Covert Chamber" a mystery novel available at Amazon.com and Barnes & Noble, and "Forgotten" the story of two WWI pilots who were forgotten for over 70 years available on Amazon.com and Kindle
View all posts by misfit120 →
This entry was posted in Uncategorized and tagged air defense, Britain, George Zimmerman, ICBM, Iraq, Olympics, Prince William, Queen Elizabeth, Rupert Murdoch, UPS. Bookmark the permalink.