Could the old TV series “Taxi” be making a comeback…..in Columbia? Hey, the pickings are ripe considering the recent popularity of 42-yea old Jose Pena a taxi driver in Columbia who is now a huge celebrity thanks to the Secret Service scandal. 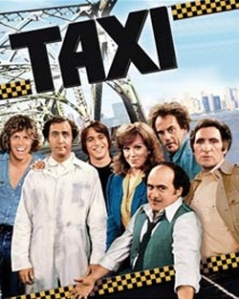 Pena, who lives with his mother and is now in hiding lest he be pounced upon by scoop hungry journalists, became an instant celebrity because he was the one who drove home the prostitute who set the scandal in motion.

Marilu Henner....who could actually play "Lolita" the hooker in the new version of "Columbian Taxi."

Meanwhile the reporters are pounding on Jose’s door asking all kinds of questions:

“Tell us Jose, did she offer ya money or favors?”

Anyhow, I thought this would be the perfect opportunity for the old TV series “Taxi” to either create a new Columbian version of the show or to at least cash in on re-runs.

This is perfect!  Just think of the possibilities what with the Secret Service scandal and hookers, and of course taxis.  The perfect combination.

Louie: “Hey Tony, get into ya cab and drive over to the Caribe hotel and pick up Lolita Jimenez.”

Tony: “Aw geez Louie, does it hafta be me. I got a audition for a part in a play and this could be my big break. Besides, Lolita never wants to pay me…it’s just, “Heyyyy Tony….wanna see my bigggg boobies in exchange for the fare.”

“Louie: “OK, Ok….I get it ya dummy. Reverend Jim, how about you….wanna go pick up Lolita?”

“Reverend Jim: “Nah, I found the religion and, um….is that a bug on the floor, holy crap, Look Louie, a bug and it’s multi colored and, wow…lookit….it’s smiling….and….”

“Louie: “Forget it Rev…..OK….Elaine….looks like you’re next to go pick up Lolita.”

“Elaine:  “Me…..you know I don’t like her. She’s always flaunting her stuff and thinks she has bigger boobs than me. HAH!  I could go a round or two with a Secret Service agent and they’d sure as hell pay me big bucks. No questions asked. Hey, give the job to Latka.”

Louie: “Yeah very funny Latka, go sit in the corner over there.”

Alex: “Look Louie, I’ll go pick up Lolita. I can handle myself with her. No problem.”

Louie: “And what make you think you’re better than all the rest of these bozos?”

Alex: “Cause “I” can keep a secret, unlike the Secret Service who’s supposed to keep secrets but can’t even meet secretly with a hooker and keep it secret. Besides, if we blab it all over the place about hookers and Secret Service agents in our first show here in Columbia why would anyone tune in to the rest of the shows the rest of the season.”

Of course the censors wouldn’t have to put any restrictions on the Columbian version of “TAXI” because prostitution is legal there so I would expect ratings to soar on the very first episode.  I’m not sure if it’s ok to show boobs on Columbian TV, but if it is, I see a long run for this new reincarnation of “Taxi.”

Meanwhile Jose Pena still remains in seclusion, but, if the show takes off I could see him potentially securing a spot in the show. Perhaps replacing Latka considering Andy Kaufman is no longer with us.  Hey….you could never understand Latka anyhow, so if the show made it here to the U.S. who’d know the damn difference.

If I'd only driven that hooker I could have gotten her to repent her sins and she would have kept her Secret Service servicing a secret.

I myself spent many years between radio broadcasting jobs driving a taxi. It’s one of the reasons, thankfully, my mind is as demented as it is. I owe it all to those years of driving a taxi. You learn a lot from that experience. Mainly because people like hookers, business men, bank robbers, perverts, and somewhat normal everyday people get into a taxi and carry on conversations as if you weren’t there.

They seem to think that when General Motors built the vehicle, you came with it. They’ll talk about ANYTHING!  Which is why my brain is so f**ked* up, yet, amazingly sane enough to write all of this stuff on a daily basis.

My own “Taxi” experience which I will always remember is driving a guy in the dead of night to Fall River, Massachusetts. When he refused to pay the fare and jumped out of the taxi I chased him and was going to spray him with some mace.  He got away but was captured by the police a few minutes later.

When the police grilled me in front of the guy, they asked me what took place. I told them everything and that I was gonna spray the hell outta the guy with my can of mace.

So the copy says to me, “Did ya know this guy had a gun?”

So the copy says, “Let me get this straight, you were gonna spray this guy with mace and he was gonna whip out his gun and shoot you….is that correct?”

I never chased anyone again.  Except for hookers who didn’t pay. And only because, the way they dress, there’s no way they were carrying a gun.  Unless it was concealed in their cleavage and it was a very small gun. Or, they had huge cleavage and a realllly bigggg gun.

Which is why I never chased hookers with huge cleavage.

(DONATE) The MisfitWisdom PayPal donate link is posted below. If it is not highlighted, copy and paste it into your browser and it will take you to the PayPal site…or you could call a taxi, and it might get you there faster. If you are a member of the Secret Service or a hooker, DO NOT engage in any conversations with the taxi driver as this will lead to a huge scandal. On the other hand, if you want to help the driver to become a big personality, feel free to blab your mouth off.

Former disc jockey, (Dick Jones) 30 years, and author of, "I Could Have Been Famous But Sex, Love & Life Got In The Way" available at Amazon.com books, & Kindle, "The Covert Chamber" a mystery novel available at Amazon.com and Barnes & Noble, and "Forgotten" the story of two WWI pilots who were forgotten for over 70 years available on Amazon.com and Kindle
View all posts by misfit120 →
This entry was posted in Uncategorized and tagged Andy Kaufman, Carol Kane, Christopher Lloyd, Columboa, Danny DiVito, Jeff Conaway, Judd Hirsch, Marilu Henner, Secret Service, TAXI TV Program, Tony danza. Bookmark the permalink.