*(DISCLAIMER)  MisfitWisdom takes absolutely no responsibility for anyone who reads today’s blog and:

2. Has recurring nightmares for the rest of their lives.

3. Calls Sarah Palin and begs her to bring up the “death panel” issue again.

4. Has a sudden panic attack when you drive by a rest home or assisted living facility.

5. Freely admit to anyone that your parents and grandparents are still alive and “literally” kicking.

6. Spend the rest of your lives in therapy.

Again….you have been warned.   I’ve done all I can possibly do to protect you from forever being traumatized. If you choose to ignore my warnings……..I accept no responsibility.

Now…..for those of you over 50, official AARP members, retired, own a scooter, walker, on oxygen and live in an assisted living facility, a rest home or are still at home and have several cats or dogs and are either hard of hearing or wear really strong bifocals…..it’s ok for you to read this blog.  Cause you already know all of this stuff you devils you.

The video was produced because of the spike in STD’s among seniors in Florida. It’s risen a whopping 71% in the past seven years. Which obviously means that bingo isn’t as popular as we thought in Florida.

(STD’s are not “Senior Toaster Danish’s,” which some of you may think is a new product that caused that 71% spike)

The video, which you can view at their site, and on YouTube, shows various positions that seniors may want to attempt while having sex. Some of which, (positions) I have posted below. (this is not for the squeamish)

Of course all of the photos from the video below show fully clothed seniors. I assume because, for the sake of all mankind, and womankind, no one really wants to see a naked senior. Which is the main reason most seniors make out with the lights off. Either that, or because seniors usually pinch their pennies and attempt to stretch their Social Security checks, they go to bed when it gets dark to save a buck on electricity……which may account for that 71% spike in sex.

Why is this rise in sex among seniors only in Florida?

Because there’s nothing else to do other than visit Disneyworld, Universal Studios and Sea World. After you’ve seen all that, there’s nothing left but bingo and SEX!  And, as we know, sex is free. And doesn’t involve a mouse, any kind of a dolphin and no one’s yelling “ACTION” except your partner.

A final warning…….many who did not heed warnings from other sites and blogs are already experiencing panic attacks as indicated by various posts I myself have read on some social media sites such as Twitter. 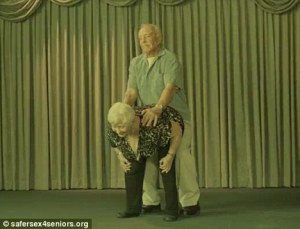 OK sweetie....I'll play horsie with ya one more time for old times sake.

Bertha....are ya sure this is how ya do CPR? 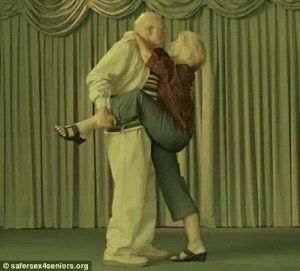 (DONATE) The MisfitWisdom PayPal donate link is posted below. If it is not highlighted, (blue) copy and paste it into your browser and it will take you to the PayPal site. Seniors wishing to make a donation please do so before you decide to attempt any of the above sexual positions. Jusssst in case you throw a joint out-of-place and are incapacitated and unable to use your computer the next day to make a donation.

Former disc jockey, (Dick Jones) 30 years, and author of, "I Could Have Been Famous But Sex, Love & Life Got In The Way" available at Amazon.com books, & Kindle, "The Covert Chamber" a mystery novel available at Amazon.com and Barnes & Noble, and "Forgotten" the story of two WWI pilots who were forgotten for over 70 years available on Amazon.com and Kindle
View all posts by misfit120 →
This entry was posted in Uncategorized and tagged AARP, Disneyworld, Florida, parents and grandparents, SaferSex4Seniors.org, Sea World, sex, Universal Studios. Bookmark the permalink.