Spain Develops A Fold Up Car. Great For Contortionist Drivers.

How small is this car. I thought you’d never ask. It’s 1.5 meters long which is about 5 feet. (Texans, or anybody on Weight Watchers do NOT buy this car)

Yep, a small car developed in Spain with the assistance of MIT’s Media-Lab in Boston, Massachusetts has come up with a car sooooo small that you can fold it up and take it with you to the office instead of parking it. Um, if you have an office on the first floor or a really good-sized elevator. 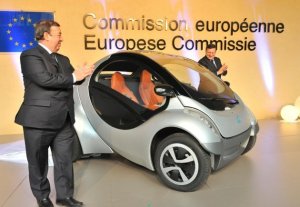 The new car is called the, Hinko” which is the Basque word for “urban” which is where the developers think this car will be driven the most.  I personally would have, given the size of this car, called it the “Ant” because it’s so small that if you leave any food in the car while it’s parked outside, it might attract an ant colony who could very well call in ant reinforcements and haul it off to an ant colony for future consumption.

Besides, Volkswagen’s nickname is the “bug” so why not attach a cutesy name like the “Ant” to this new car.

The car is electric and seats two people, very thin people I would think, has no doors, which could pose a problem on a rainy day or if you want some privacy, say like if you have one of those itches that needs scratching below the waist.

The “Hinko,” (is it me or does this car sound like it should be manufactured by the Japanese) as you can see in the photos is verrrry small and can fold up. I would assume that before you fold it up you have to make sure your spouse or mother-in-law is out of the car first.  Then again, who cares on the latter. 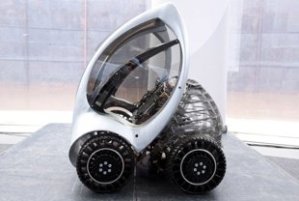 HellllP! Hellllp! I folded up my car before I got out!!!

It folds up just like a child’s collapsible stroller for easy parking, or, I guess if you really want to pick it up and tote it off to the office. Which would open up another revenue source for local municipalities, office parking meters.

It can go 75 miles without a recharge and is only $16,400 in American money.  I said “only” for anyone who just happens to have $16 thousand dollars lying around doing nothing as most of us do.

It will go on sale starting in 2013 in Europe.  Now the most interesting aspect of this car is that the motor is located in the wheels.  Yep, the wheels.  Which means that it has no front hood, which means you save on all that unnecessary optional stuff like a hood ornament, extra chrome, and deer repellent sensors.  If you hit a deer in that car they’ll simply fold you, the deer, and the car up into one neat package and haul you off to a cemetery.

I personally like the idea of the motor being located in the wheels for a number of reasons. Car gets banged up…hell, scrap it and keep the motor, which, as I said is in the tires. Not only that, but if that car is so small that the motor is in the tires, hell, take them off at night, haul the motor into the house and use it to run some appliances. Waste not want not….my motto.

The only down side I can see to this is car thieves. You all know what happens when you park your car in a seedy neighborhood….kinda like the one I live in. Turn your back for one second and your car is stripped. This new car makes it a lot easier for thieves. No longer do they have to strip one of these new “Hinko’s” but all they have to do is stroll up to one of them, slip it into a pair of those baggy jeans, and off they go.  And, if they totally wanna avoid any suspicion, just leave a baby stroller in its place and no one will know the difference.

Next invention on the horizon at MIT…..a super diet pill that makes you lose weight overnight so that you can fit into that “Hinko” car.  I see sales of these cars skyrocketing, along with a rush on diet pills…………and baby strollers……….for those of you who don’t wanna fork out the $16 thousand for the car but are willing to have your old kids baby stroller converted to a “Hinko.”

(DONATE) The MisfitWisdom PayPal donate link is posted below. If it is not highlighted it might be due to those engineers at MIT developing a anti-highlighting spray that protects blog readers from having to be subjected to the MisfitWisdom donate link posting. However, I have developed an anti anti spray to counter their sinister efforts. All you have to do is spray your computer screen with Windex and then copy and paste the PayPal link into your browser. Works every time. Foiled again MIT!

Former disc jockey, (Dick Jones) 30 years, and author of, "I Could Have Been Famous But Sex, Love & Life Got In The Way" available at Amazon.com books, & Kindle, "The Covert Chamber" a mystery novel available at Amazon.com and Barnes & Noble, and "Forgotten" the story of two WWI pilots who were forgotten for over 70 years available on Amazon.com and Kindle
View all posts by misfit120 →
This entry was posted in Uncategorized and tagged Japanese, MIT, The Hinko car, Volkswagon, Weight Watchers. Bookmark the permalink.