Every stinkin’ year we normal everyday slugs have to endure the horn blowing and hype of the entertainment industry as they pat themselves on the back for a great job for giving us movies to keep us entertained so that we don’t go absolutely nutso watching these endless political debates and the constant campaigning along with our otherwise mundane lives.

Of course I’m referring to the annual Oscar nominations that were just announced yesterday.  It’s ok for Hollywood to want to honor their achievements and that of the stars and all the rest of the individuals who contributed to a great movie. BUT……who actually, other than the stars and those individuals gives a rats ass?  Me…..nope. 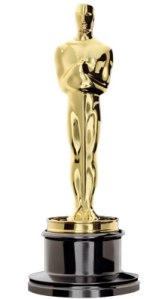 Do I care enough to sit in front of my TV to watch the endless stream of award winners prance up to the podium and thank everyone for their Oscar down to the family dog? No!

Now you might think I’m being sort of cold-hearted, but ya have to think of it from my perspective.  Besides the entertainment industry, what other industry has a television program that honors people in the workplace?  After all, acting and producing movies is actually a “workplace” where actresses and actors go to work each and every day.

So, if you kinda take that out of context, don’t we, as normal everyday people do the same exact thing when we go to work each day…..except that we, for the most part, don’t get to dress up in outlandish costumes or wear makup……except for women that is.

Well, actually some of us do actually get to wear costumes. chauffeurs, UPS and FedEx drivers, the mailman, servers at Dunkin Donuts, McDonald’s, Burger Kings, Wendy’s, and street hookers, who, obviously should be number one on the list of people who should be awarded with an Oscar or something, simply for some of THOSE outlandish outfits.  Not to mention the acting performances both before and after soliciting prospective patrons. Worthy of an Oscar don’t ya think?

How about that FedEx guy who tossed that package over a fence containing an expensive computer monitor and kept us all in stitches.  Or the pepper spray cop who kept his cool while spraying a bunch of protesters. The action scene in that was totally worthy of an Oscar. Or those perfectly choreographed dance scenes that highlighted the exquisite moves of former Italian Prime Minister Silvio Burlusconi at those Bunga Bunga parties. Best Oscar award for a foreign dance film. 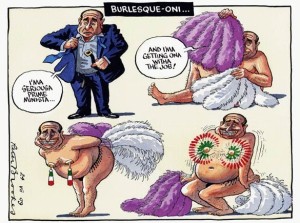 Best Oscar For Choreographing and Performing in a Dance Scene: Silvio Burlusconi (knog.google.com)

The Captain of that cruise liner, Francseco Schettino, that sank off the coast of Italy should surely get the “Best Actor” award for his performance. That heart wrenching scene where he says to authorities, with tears in his eyes and full of emotion, “Looka, I dida not abondona da shipa,…….I wasa helping da passengers and fella off da boat and into da lifeboata anda beforea ah knowa it, ba-da-booma, I’ma ona land.”

I cried myself at all of the emotion in that one touching scene. My heart went out to the captain in his valiant attempt to remain on that ship. The shear emotion depicted in his facial expressions as he told his heart wrenching story while sitting at police headquarters sipping a latte. Oscar award for the best actor.

How about an award for the best actress. Surely one can’t forget that emotional scene when former Tea Potty candidate Christine O’Donnell said, “I am not a witch.” I put down my eye of newt sandwich and applauded that speech. Yep….best actress.

There are a lot of other categories in the Academy Awards that regular people deserve to be honored for as well.  Make up artists. Yes, I know we don’t care about THOSE awards, but this year one particular person stands out and should receive that award.  If I were on that nominating board I would have chosen, in the category of best makeup for a performance, Callista Gingrich.  My gawd…..have you seen her!  It must take hours and hours of hair spray and Elmers glue just to prepare her to stand by Newt’s side and hope the sun isn’t strong enough to melt her makeup and hair.  Fascinating if ya ask me.

I think it’s about time we all get together and establish our own Oscars.  Perhaps call them something else, so as not to infringe upon the name “Oscar.”  Something really catchy and worthy of honoring all of the people who never get honored right down to normal everyday people.

HEY!   How about “SLUG!”  YES!  A gold covered slug!  Slugs never get any recognition and this would be their shining moment as well.  Present it to the mailman, that UPS or FedEx driver, that pepper spray guy and all the rest of the people who never get any appreciation for their accomplishments.  Who knows, this idea might just take off and next year at this time we’d be watching the first annual “Slug” awards on national TV. 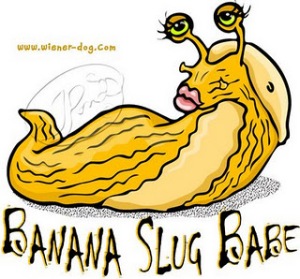 Starting with best actress and actor.

Best Actress: My other half with her famous, “I have a headache” line when I’m feeling frisky.

Best Actor: Obviously myself, when I reply to her, “Do ya really wanna waste a good Viagra pill…………………do ya punk?”

(DONATE) The MisfitWisdom daily, weekly, monthly, annual donate link for PayPal donations for the cause is posted below. If it is not highlighted it is most likely due to the fact that most of the highlighting has been used up by the Oscar people in highlighting their achievements. In that case, just click on the link, copy and paste it into your browser and it will take you to the PayPal site where you can then make a donation and receive a bit of applause….from me.

Former disc jockey, (Dick Jones) 30 years, and author of, "I Could Have Been Famous But Sex, Love & Life Got In The Way" available at Amazon.com books, & Kindle, "The Covert Chamber" a mystery novel available at Amazon.com and Barnes & Noble, and "Forgotten" the story of two WWI pilots who were forgotten for over 70 years available on Amazon.com and Kindle
View all posts by misfit120 →
This entry was posted in Uncategorized and tagged Bunga Bunga, Burger King, Callista Gingrich, Captain Francseco Schettino, Christine O'Donnell, Costa Concordia, Dunkin Donuts, FedEx, Hollywood, McDonalds, Silvio Burlusconi, The Oscars, UPS, Wendys. Bookmark the permalink.