Who Are Those 2 or 3 Percentages In Polls?

We are all familiar with polls.  Well, most of us. Except for those people who think that when you mention “polls” they think you’re talking about Polish people.  Now THOSE  2 and 3 percent are the two to three percentages I’m writing about today. Not Polish people.

This time of the year when most polls are centered on politics, on any given day you’ll come across a poll on a political candidate, what the polls say about the candidate’s chances of winning, where they stand, or other polls on the popularity of TV programs, celebrities, hot issues and how long Kim Kardashian/s marriage would last.  We all know the result of that last one. 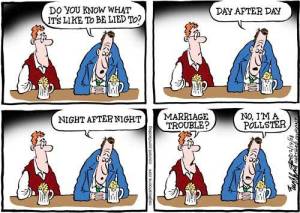 But, what amazes me are those unidentified 2 and 3 percentage people. It’s like they’re brain-dead idiots.

For instance.  If you were to take a poll asking the following question:

“Is it ok to murder someone”   Now you know there’s going to be a breakdown of the final polls results.  Say like 95% will say “no.” 2% will say it depends on the circumstances, like defending yourself.  BUT….out pop those 2 and 3 percentage point people who will say they either have no opinion or simply don’t know.  WTF!!!

What freakin’ planet are these people on?  Are they walking around freely with no restrictions?  Can ya spot them easily by the blank look on their faces and the drool?  WHAT!!

Ok….now let’s look at this in comparison to recent news events.  Everybody has an opinion on Herman Cains recent sexual harassment problems.  Or the verdict in the Michael Jackson case. Or if Obama is doing a good job as President. Or if Congress is brain-dead and IS actually that 2 and 3 percent. Which is a very good possibility.

But, that assumption aside, just who are these 2 and 3 percentages. I’m serious here folks.  Watch the next poll that you see on TV or read in a newspaper or magazine that asks a very simple question that could actually be answered in a simple yes or no….say like……

Or….to solidify my point, jusssssst in case you can’t actually grasp the point that I’m attempting to make, which may mean that you might be in that 2 or 3 percent range, in which case, take the next poll, and if you fall into the 2 or 3 percent range….seek help immediately and DO NOT respond to any more polls.

Ok…..poll question:  Now think deeply with a lot of concentration before you answer this poll question.

“Should sexual relations with an animal be a crime?”

Now go ahead and laugh folks, but I’ll bet ya there actually would be that response from that 2 to 3 % of people.  Which is why you should really watch those poll questions, weigh the logic behind them, and then see how those 2 and 3 percent answer.  It’s really scary.

I mean,. you don’t have to be a rocket scientist to respond in a logical manner when you’re asked a simple poll question.  Unless of course it has to deal with donating your brain to NASA so that they can send it to Mars for one of their experiments.  Betcha 2 or 3 percent say…”um, do I git paid for it?”

Of course, and this is my own personal opinion, I believe that most polls are biased depending on who’s paying for the poll, while other polls, (very few) are unbiased, again, depending on the source.  You have to sort that out.

If you’re a Conservative, Liberal or whatever, you obviously will tend to lean towards the results favoring your own party and beliefs.  So, stick with it if that floats your boat.  Me, I take all polls with a grain of salt……on the rim of a Margareta glass.

Unless it’s a poll about women and sex….in which case most men seem to agree on. Even those 2 and 3 percentages.  You’ll notice I said “most men” and not women.  Because you cannot give a woman a poll to answer about sex….unless she’s young, single, and has never been married.

Because in a poll about sex…….say like the following question I made up, this would be the results if women were polled and asked:

“Are all men pigs because they want sex all of the time?”

So ya see, it’s all a matter of opinion and whom you ask certain questions to in a poll. And, there’s always gonna be that strange 1, 2, and 3 percent that have no freakin’ clue.  Although in that last example above, I’m with that woman who voted with the 1%.

(DONATE) The MisfitWisdom PayPal donate link is below. If it is not highlighted, copy and paste it into your browser and it will take you to the PayPal site where you can make a donation, or, be among the 0% who have chosen to donate so far.  See, in THIS poll of people who have donated, I’m obviously correct in my percentages….which is 0% donations.  Now if I could only find that one woman who’s over 65 who was in that 1% as to having sex with a guy that’s still breathing I might be able to convince her to at least donate too.

Former disc jockey, (Dick Jones) 30 years, and author of, "I Could Have Been Famous But Sex, Love & Life Got In The Way" available at Amazon.com books, & Kindle, "The Covert Chamber" a mystery novel available at Amazon.com and Barnes & Noble, and "Forgotten" the story of two WWI pilots who were forgotten for over 70 years available on Amazon.com and Kindle
View all posts by misfit120 →
This entry was posted in Uncategorized and tagged congress, Democratic, Herman Cain, Kim Kardashian, Michael Jackson, Mickey Mouse n, Obama, Political pollsters, polls, Republican. Bookmark the permalink.