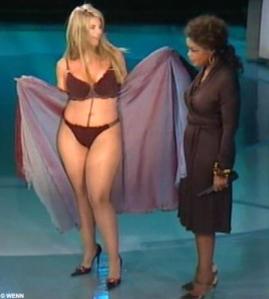 Kirstie on Oprah a while back obviously demonstrating how to flash someone.

Alley. One minute she’s thin and the next time I see her she’s overweight to the point that I don’t even recognize her.  I’m thinkin’ that if she ever wanted to pull off a great bank job all she has to do is knock one-off when she’s overweight, go home, lose a gazillion pounds, and they’d never be able to identify her if she showed up on those bank security cameras.

I mean, just take a look at these photos of Kirstie. She’s gone from a size 14 to a size 4 which makes her body size ten times smaller. She actually lost 100 pounds!  Geez, if I lost that much weight I’d be damn invisible. Or dead.

Kirstie claims that she did not have any plastic surgery either. Just being on a strict diet. For me, that would be called starvation. I can’t for one minute image how in the hell she lost that much weight without passing out from starving herself.  Geez, I can’t go an hour without scarfing down a Oreo or a Fig Newton.  And I don’t even eat that much, yet I’m at least 20 pounds overweight. WTF!!

I’m happy for Kirstie but a bit envious.  I’ve tried just about everything to lose weight from walking, eating less, watching my caloric intake, and attempting to go into hibernation for six months like bears do. Most I can sleep is six hours though. And that’s only due to the fact that we have five cats that demand that they be fed every 6 hours and do everything they can to get me out of bed.

You’d think THEY would be fat eating so much. .  Hmmm……maybe I need to look into the ingredients in cat food. Do they list calories on cat food cans? Has anybody ever gone on a cat food diet…..excluding cats?  I mean, if Fancy Feast has tuna casserole in a can just how bad can it be? Might be worth a shot.

I could become a spokesman for Fancy feast if I opted to give that tuna casserole diet a shot. Would they accept a human who’s on a Fancy feast diet as their spokesman?  HEY….it worked for that guy in the Subway commercials!

My question is why is it that all diets suck. Except for that cookie diet…..which I can’t afford.  I attempted at one time to start my own cookie diet but found out that you could only eat two Oreos, and anything beyond that was a no no.  It was also difficult for me to experiment with that Oreo diet because my other half was eating them faster than I could space them out over a period of time.

So now both of us are overweight from eating damn Oreos. So much for the cookie diet.

I personally think, if most of you out there who are overweight and have absolutely no willpower whatsoever, can’t afford those diet programs, Jenny Craig or Weight  Watchers, is to somehow find a way to go into an induced coma for a several week period.

Because as far as I’m concerned that’s the only freakin’ way I’m EVER gonna lose any weight.

Unless Nabisco discontinues making Oreos……then I might stand at least a decent chance of losing weight.

(DONATE) The PayPal donate link is below. If it is not highlighted, copy and paste it into your browser and it will take you to the PayPal site where you can donate to MW for creative effort. Look at it this way folks.  Instead of buying those Oreos or Fig Newtons, take that money and donate it to MW. Just think of the weight you’ll lose by contributing. Kinda like contributing to the “MisfitCraig Weight Loss Program.” 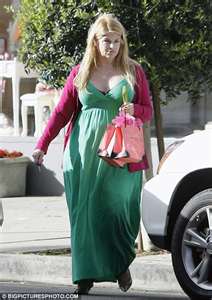 Kirstie showing some weight in this photo

Former disc jockey, (Dick Jones) 30 years, and author of, "I Could Have Been Famous But Sex, Love & Life Got In The Way" available at Amazon.com books, & Kindle, "The Covert Chamber" a mystery novel available at Amazon.com and Barnes & Noble, and "Forgotten" the story of two WWI pilots who were forgotten for over 70 years available on Amazon.com and Kindle
View all posts by misfit120 →
This entry was posted in Uncategorized and tagged Fancy Feast, Fig Newtons, Jenny Craig, Kirstie Alley, Nabisco, Oprah, Oreos., Weight Watchers. Bookmark the permalink.