Break out the depends and Viagra folks, the original Batman, Robin and Catwoman reunited recently at a panel discussion sponsored by TV Network “The Hub” celebrating the 45th anniversary of the dynamic duo, and one cat.

There was no discussion of any of the three characters making a comeback, most likely due to the fact that the original members, Adam West, (83) Bert Ward (65) and Julie Newmar, (78) at their ages wouldn’t be able to fit into their crime fighting outfits, lest even chase a criminal without the use of a high-powered souped up scooter that a lot of seniors use.

“Help me get into my Batman spandex stretch pants and shirt and my Batman bifocal equipped mask. While you’re helping me, call Robin and tell him we need to get right out and start fighting crime.”

“Um, yes sir, but Robin is in Chicago attending an AARP meeting with former superhero Captain Marvel and Plastic Man.”

“Sorry sir, Mighty Mouse retired some time ago after cutting a deal with the Kraft company to market their Kraft singles cheese products. I understand he’s doing quite well and has a retirement home in Aruba.”

“Well, yes sir, but this is the 21st century and crime fighting has evolved. There aren’t many caped crusaders around anymore.  For instance, there’s “Iron Man,” and Captain Marvel’s son “Private Marvel,” and “Captain America,”who by the way is starring in a new movie, and there’s the Attorney General of the United States who fights crime without the use of a cape or a fast car.”

“OMG!!!  What’s this world coming to Alfred…..WAIT!!!   What about Arnold…..surely Arnold is still around fighting crime and corruption.”

“Sir, if you’re referring to Arnold Schwarzenegger, I’m not sure that he would agree to fill in for Robin. I might also add that Arnold is in his 60’s and doesn’t quite fit into speedos comfortably anymore. In fact, Arnold has just signed a contract to star in a new movie, “The Last Stand” where he plays a sheriff who has trouble standing, due to his age, but still manages to fight the outlaws by showing off his sagging abs, which freaks out the bad guys, and they all take off for the nearest saloon.”

“A Sheriff!  A Sheriff!  WTF!!   What the heck do I have to do to get some damn recognition around here Alfred?”

“Sir, perhaps you might consider running for Mayor of Gotham City…..worked for Arnold.”

“Holy baloney Alfred…….that’s ingenius!  Then after I do a few terms as Mayor I can sign a movie contract like Arnold and be a big star again…..!”

“But Batman sir, after two terms of serving as Mayor of Gotham City you’ll be 91 years old……what movie role could you possibly play?”

(DONATE) The PayPal link is below. If it is not highlighted it is due to sinister forces out to destroy the good all superheros do. In that case, thwart, (love that word) their efforts by simply copying and pasting the link into your superhero browser and it will take you directly to the superhero PayPal site where you can donate to help fight crime and promote the American way…..namely funding this blog. 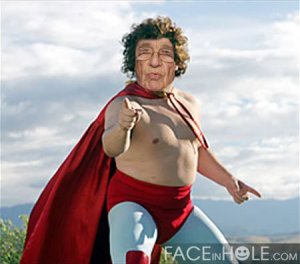 Former disc jockey, (Dick Jones) 30 years, and author of, "I Could Have Been Famous But Sex, Love & Life Got In The Way" available at Amazon.com books, & Kindle, "The Covert Chamber" a mystery novel available at Amazon.com and Barnes & Noble, and "Forgotten" the story of two WWI pilots who were forgotten for over 70 years available on Amazon.com and Kindle
View all posts by misfit120 →
This entry was posted in Uncategorized and tagged Adam West, Arnold Schwarzenegger, Batman & Robin, Bert Ward, Captain Marvel, Fox News, Julie Newmar, Mighty Mouse, Plastic Man, Rupert Murdoch. Bookmark the permalink.