A Look, Or Should I Say, “Peek” At Pornography 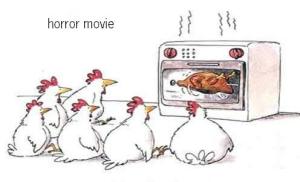 Scene from a TV horror movie in a normal chicken household where teenage chickens were allowed to view this show and later required extensive therapy (cartoon:amazingdata.com)

Yesterday I wrote about Michelle Bachmann signing a pledge that she would ban pornography, among other things, if she is elected President of the United States.  This, of course, to appease the Iowa influential social conservative organization, “The Family Leader” in order to receive the group’s endorsement.

“Ah’ll do anythin for votes.”

“Oh..gee…Michelle, will ya eat this here worm…I’ll vote for you if ya do. So will my second cousin and wife Thelma and my uncle Festus.”

As I said, It’s all about the votes. Unfortunately, as Michelle very well knows, pornography “IS” protected by the ol 1st Amendment of the Constitution of the U-Nited States of America. Wonder how many in congress will support Michelle when and if she decides to amend the Constitution.

Now, personally I take offense to the fact that a lot of people seem to think that pornography is the evil that will destroy the earth, corrupt our young children’s minds, and make teenagers go blind.

Come to think of it, there are a lot of teenagers that do wear glasses these days….hmmmm….maybe that’s just a coincidence.

Bachmann, and the rest of those bozos who got her to sign that pledge should be more concerned with those violent video games that the Supreme Court ruled is ok for kids to watch and play because it is also protected by the 1st amendment.

“Johnny, what’s all that noise out there the living room?”

“Nothin’ mom….Sally and I are just playing “Decapitation Derby” our new video game.”

“Oh that’s nice honey.  How many people have you and Sally decapitated so far?”

“We’re up to 500 and if Sally can lure this old couple into the chain saw department in a Wal-Mart and lop off their heads she gets 1,000,000 decapitation  points….an all time high!”

“Ooooooooh….I’m so proud of you two.  When I’m finished signing this anti pornography petition for Michelle Bachmann I’ll come in and give it a shot myself.”

So let me see if I understand this correctly….being a bit feeble-minded as I am.  It’s not ok to view pornography, (naked men and women…..possibly an animal or two) and it’s not ok to expose a woman’s breast (2) on TV (horrors) but cleavage is ok, and it’s not ok to say F**K or any other mind warping words anywhere, lest we go deaf, BUT, it’s ok to show blood, gore, maggots, arms being lopped off, heads rolling in a gush of blood, rape scenes and eyes being gouged out?

EXAMPLE:  The other evening I was watching a re-run of “Criminal Minds.” In this episode a 9-year-old forced model airplane parts down his brother’s throat, and killed him because his younger brother broke his model airplane. His parents covered up the deed as did a policeman friend.  So, does this send a message to ANY child who hates his younger brother that, “Hey…there’s an idea!”

In conclusion, it is my own personal opinion, which I think I have a right to, at least the last time I checked, unless the Supreme Court says that I do not have a right to my own opinion, that graphic violent games and movies on TV or anywhere are far worse than pornography could ever be.

With the exception of that one photo of my ex-wife because it reminds me of how stupid I was back then when I married her because I saw her naked.

And the only person I wanted to kill was myself for being so stupid.

I rest my case folks.

(DONATE) As usual, the PayPal link is below if you care to donate. If the link is not highlighted, simply copy and paste it into your browser and it takes you to PayPal with no pornography whatsoever involved.

Former disc jockey, (Dick Jones) 30 years, and author of, "I Could Have Been Famous But Sex, Love & Life Got In The Way" available at Amazon.com books, & Kindle, "The Covert Chamber" a mystery novel available at Amazon.com and Barnes & Noble, and "Forgotten" the story of two WWI pilots who were forgotten for over 70 years available on Amazon.com and Kindle
View all posts by misfit120 →
This entry was posted in Uncategorized and tagged 1st amendement, christian conservatives, Criminal Minds TV Show, Iowa, Michelle Bachmann, pornography, Supreme Court, video games, Wal-Mart. Bookmark the permalink.

1 Response to A Look, Or Should I Say, “Peek” At Pornography