Would You Believe That Moammar G,K,Q, Or Whatever, Has Had Plastic Surgery! 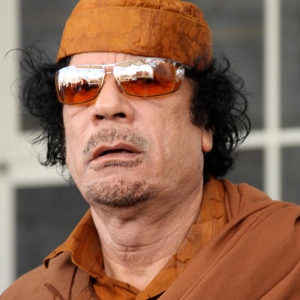 You gotta be kidding. Moammar, whatever his last name starts with has actually had plastic surgery as evidenced in these before and after photographs I’ve posted.

According to a Brazilian plastic surgeon, fat from Moammar’s stomach was used to make the Libyan leader look younger when he was 53.  Of course now he’s 68, so apparently things aren’t working out so great for Moammar these days if you look at some of the current photographs of him.

I frankly think he looked much better before he had the surgery. Don’t ya think? Green definitely IS his color.

At the same time, his surgeon implanted hair plugs, most likely because intelligent brain matter may have been leaking from Moammar’s head. I think it was a bit too late however as evidenced by his rants on Libyan television.

They do have television over there don’t they?  Can’t be too sure.

The surgeon also suggested, in light of the recent events in Libya, that Moammar, or Mo as he’s affectionately known, should have another face lift so as not to appear old again.  But he refused, pointing out that his magic mirror, which he speaks to each morning, still insists that he is the fairest of them all.

Confidential sources tell MisfitWisdom that numerous cracked mirrors have been found in the trash just outside of Moammar’s bedroom suggesting that if you’re a mirror that tells Moammar the truth, you’re screwed.

I think somewhere there was a wicked old stepmother who had such a mirror and may have been the original owner of the one given to Moammar. Again, can’t be absolutely sure about that.

All in all you really can’t blame Moammar for wanting to appear young to all of his loyal followers.  Old sucks. Just ask Paul Anka and Joan Rivers, who we all know have never aged at all. Stay away from the hot sun guys….plastic melts ya know.

I myself would never, ever consider plastic surgery because for one thing I don’t have enough skin on my stomach to transfer to my face. However, if they were to take skin from my butt, that might actually work.

Then I could really appear as an ass to everybody…..like Moammar.

Former disc jockey, (Dick Jones) 30 years, and author of, "I Could Have Been Famous But Sex, Love & Life Got In The Way" available at Amazon.com books, & Kindle, "The Covert Chamber" a mystery novel available at Amazon.com and Barnes & Noble, and "Forgotten" the story of two WWI pilots who were forgotten for over 70 years available on Amazon.com and Kindle
View all posts by misfit120 →
This entry was posted in Uncategorized and tagged Moammar Gadahfi, plastic surgery Lybia, Shrek. Bookmark the permalink.