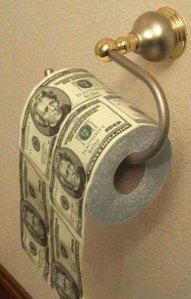 Money for the filthy rich. (guzer.com) )

I was joking, but, South Carolina is seriously considering printing their own currency in case the Federal Reserve collapses and hyper-inflation ensues.

(hyper-inflation: an excessive amount of over spending on boob jobs)

In Utah, one politician has gone a step further and suggests that residents be allowed to mint their own money.

(Note: If this idea flys in Utah, I’m immediately cancelling this daily blog site, which I write for nothing, and which I do faithfully every day, and moving to Utah shortly after purchasing a printing press)

I have no idea what currency would look like if states or individuals were allowed to print their own money, but I did some research into this, and you can see the result, (pictured) with the appropriate credit.

This story reminded me of a true story some years ago about a counterfeiter, Edward Mueller, that the Treasury Department could never catch.  He was an older gent, (73) who just wanted to get by in life, and, having meager funds to survive, decided to print his own money while living in New York beginning in 1938.  So…..that’s exactly what he did. Except he only printed one dollar bills.  This drove the Feds crazy because no one ever checks one dollar bills, so they had a hell of a time catching this guy.

He  printed one dollar bills whenever he needed to buy something. A loaf of bread, milk etc.  Took the Feds years to catch him even though he had drawn a very crude picture of Washington on the one dollar bill and spelled it “Wahsington.”  This guy obviously was not a genius.

Years passed and as luck would have it firemen responded to a call at the guys apartment complex and lo and behold, they discovered his printing press. That’s how they finally caught him. He was sentenced to one year and one day, but only served four months of the sentence.

A movie was made about him titled, “Mr. 88o” after the file number the Feds assigned to his case. You can also read more on him by going to snopes.com and keying in “Mr 880.”

Makes me wanna get my own printing press and start minting pennies. Who the hell is gonna check counterfeit pennies? I could make a fortune!!!!

Former disc jockey, (Dick Jones) 30 years, and author of, "I Could Have Been Famous But Sex, Love & Life Got In The Way" available at Amazon.com books, & Kindle, "The Covert Chamber" a mystery novel available at Amazon.com and Barnes & Noble, and "Forgotten" the story of two WWI pilots who were forgotten for over 70 years available on Amazon.com and Kindle
View all posts by misfit120 →
This entry was posted in Uncategorized and tagged counterfeit, funny money, Mr. 880, South Carolina, treasury dept, Utah. Bookmark the permalink.